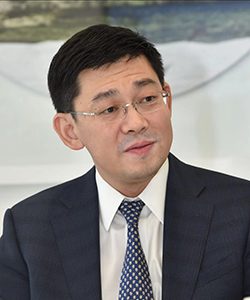 On 23 January, two days before the start of the Lunar New Year, Arthur Yu, FCMA, CGMA, the China CFO of carmaker Jaguar Land Rover (JLR), had planned to travel to Beijing for business meetings. But the trip was called off after JLR issued an internal travel ban for all employees. That same morning, China announced that Wuhan, the epicentre of the coronavirus, had been sealed off to stop the contagion.

From then on, things moved at lightning speed. A global pandemic steering committee was set up, and the first and highest priority was to ensure all JLR employees were in safe places. In an email to top JLR executives in China that Yu received, Group CEO Ralf Speth emphasised looking after JLR employees’ health.

Employees on work trips abroad were flown home. Its 4,500 staff in China were told to spend a minute every morning recording their body temperature, location, and whether they had been in contact with someone from the Wuhan area into a mobile app the company developed. All these were completed over the Lunar New Year holiday as heightened news coverage of the novel coronavirus began to shed light on its severity.

It was only after the company got its employees to safe areas that work began on assessing the impact of the virus outbreak.

How can a CFO manage an unexpected and wide-scale disruption to the business with no certainty when conditions will improve?

The stakes are high. Its factory in Changshu, about 800km from Wuhan, is still idle. A facility with production capacity of 200,000 units a year, it was set up as a joint venture in 2012 with Chinese carmaker Chery Automobile. Its Range Rover Evoque, Land Rover Discovery Sport, and Jaguar E-Pace for the Chinese market are built at the plant. JLR’s China market accounts for one-fifth of its global sales volume.

The reopening date of the factory is still under review. The latest local government policy requires all its employees returning from outside of the city to self-quarantine for 14 days. That’s about half of its workers.

Even when the factory reopens, the extent of its production is still undetermined. The reason is simple. A car is made up of about 30,000 parts, from a big windscreen down to a tiny screw, supplied by hundreds of parts manufacturers. One missing part can stall the whole assembly line. It’s uncertain whether these suppliers will get back to work the same week and whether enough factory workers will be available.

Against this backdrop, Yu told FM magazine that his immediate priorities are in three areas — business continuity, cost controls, and cash management.

“We started looking into contingency planning — how can we work remotely to keep the critical processes going?” Yu said. “How can we keep the factory going? How can we keep the supply chain under control so that our suppliers can still supply parts to our China and UK factory?”

A business continuity plan was already developed well in advance, he said. But it only outlined general processes.

For instance, for any information on the China business’s situation, JLR colleagues globally know the China executive team is the point of contact. “But we didn’t plan details,” said Yu, who became JLR’s China CFO in 2018. “So that’s something we need to look into after this round of crisis, how we can enhance and improve the plan.”

What is missing in the business continuity plan is scenario planning, he said. The China team had to develop detailed guiding policies in the past few weeks as they faced the possibility the current crisis could go on for months. For example, a policy that was added spells out which employees can have access to the office building. This is an issue because many employees had not taken their laptops home for the Lunar New Year holiday, so they needed to return to the office to collect them.

What was important was that employees did not feel overwhelmed during the unexpected circumstances that escalated quickly, he said. “People didn’t panic. They actually followed the procedure, the process. It was under control.”

For the finance team, Yu stressed that critical finance processes — accounts payable, accounts receivable, payroll, and accounting — must operate as normal, with a remote working plan in place.

“Many of our employees in China have never experienced remote working from home in such an uncertain environment,” he said. “We are making extra efforts in planning and coordination among the different finance teams and with other functions.”

Once critical processes are able to support the business operation, assessing the financial impact of every business decision is the next priority for the finance team.

A former Asia, Middle East, and Africa CFO of BT Group and a cost-transformation expert who delivered savings amounting to £1.2 billion ($1.56 billion) in a turnaround plan while at that company, Yu is tenacious when it comes to optimising fixed costs.

“We are forensically looking into fixed costs and halting activities that do not add value,” Yu said. He started with marketing campaigns.

“During this period, we usually have plans for marketing campaigns like auto shows,” Yu said. “We’re considering which events we can pull out from. That’s actually saving us a significant amount of money.”

More than cost-cutting, a good cost control is also about reprioritising the limited budget available. His team is looking into projects that have a good business case, such as marketing on online retail platforms.

On taxes, he said JLR China is in discussions with local governments on possibly delaying tax and social security payments to April or May, which the Chinese government is allowing in some cases in response to the health crisis. These measures will help protect JLR’s cash flow, Yu said.

His team is also negotiating with its office building landlord to reduce the rent by half during this period to support continued operation.

He is working with the business to re-baseline the sales volume forecast, revise the target for JLR’s 245 retailers in China, and update its factory production plan according to the forecasted fall in demand.

“This is to ensure that our stock level is optimised to avoid cash unnecessarily tied up in the end-to-end value chain,” Yu said.

To support its network of retailers, his team decided to pay them the rebate — an incentive paid out for cars sold — in advance. Its retailers are not operating yet. The impact of city lockdowns and the almost empty streets, where consumers avoid public spaces other than supermarkets, is already apparent to the retailers. The cash injection will prevent its retailers from falling into a liquidity crunch during this period.

It’s a shift in timing, Yu explained. The quarterly payments, which are usually due in March, are being paid out in February.

“We’ve done the calculations. We know we can afford to pay them,” he said. “It’s a big payment to them, and it will allow them to have sufficient money to keep the business going. In the medium to long term, it’s beneficial to us as well.”

Having a robust retailer network stay afloat could cushion the definite drop in sales on the horizon. JLR’s parent company, Indian carmaker Tata Motors, had said late last month that it anticipates a negative impact on its forecasted 3% profit margin and supply shortages due to the coronavirus.

As the company heads towards the end of its fiscal year in March, Yu is determined to deliver the company’s commitment on improved profitability and cash flow.

What Yu and all other businesses impacted by the outbreak are waiting for is a date when the virus will taper off.

“Are we reaching the peak? Are we able to see if the virus is under control?” he said.

When the number of infection cases subsides, companies will be better positioned to assess next steps for the business.

“But at this moment, we cannot afford to keep the factory, regional offices, and retail network shut for a long period,” Yu said. “Because we have to survive, we have to produce cars, sell the cars, then we can get the cash inflow into the business.”

His thoughts on the timeframe when things will improve?

“Personally, I hope the situation will get better toward the end of February, and in March, to be able to stabilise the situation,” he said. “But that’s the optimistic view.”

Meanwhile, Yu said finance needs to be a leader during this period to set the direction for operations teams on “what to stop, what to prioritise, and what to re-purpose”.

Although uncertainty remains a theme that hovers over business decisions, Yu is clear-headed about one fact.

“A lot of times it’s not that a decision is difficult to make because a situation is unexpected. What’s difficult is the priority.”

For more news and reporting on the coronavirus and how management accountants can handle challenges related to the outbreak, visit FM’s coronavirus resources page.

— Alexis See Tho (Alexis.SeeTho@aicpa-cima.com) is an FM magazine associate editor.