Creating an ethical culture at work is more than crafting a code of ethics or putting words on a website — and the responsibility often falls on managers. As much as managers would like to uphold the highest ethical standards, recent surveys reveal that pressures to meet targets sometimes conspire to push business ethics to the periphery. And such behaviour should raise red flags in any organisation.

The Ethics at Work surveys by the Institute of Business Ethics (IBE) of managers and nonmanagers in Europe and Australia, found that managers were more lenient with “petty fiddling” — behaviours like charging personal entertainment to company expenses, minor exaggeration of travel expenses, using company petrol for personal mileage, and favouring family or friends when recruiting or awarding contracts. For 38% of UK managers, such fiddling is considered “inevitable in a modern organisation”, the highest in the Europe study, compared with managers in France (28%) and Switzerland (22%), and this view is more prevalent in public organisations versus private companies.

More than one in ten managers in Europe and Australia also said that “artificially increasing profits in the books as long as no money is stolen” is acceptable behaviour. This attitude should be a cause for concern because it undermines managers’ function as role models for ethical behaviour, said Guendalina Dondé, head of research at the IBE and co-author of the studies. More importantly, the view that fiddling with profit numbers is acceptable “might lead to some serious issues for the company”, she said. (Editor’s note: Such behaviour also might be a criminal offence in some countries, resulting in potential criminal liability for the manager.)

Part of the reason for managers’ leniency when it comes to ethically questionable behaviours is that managers are in very “tricky positions”, Dondé said. “Very often they may feel pressured to cut corners, and they may pass on this pressure to the people they manage.”

In the surveys, both European and Australian managers are more likely to say that they have felt pressure to compromise ethics, compared to nonmanagers. Some of the most-cited reasons are time pressure, following bosses’ orders, being underresourced, and having to meet unrealistic business objectives or deadlines. 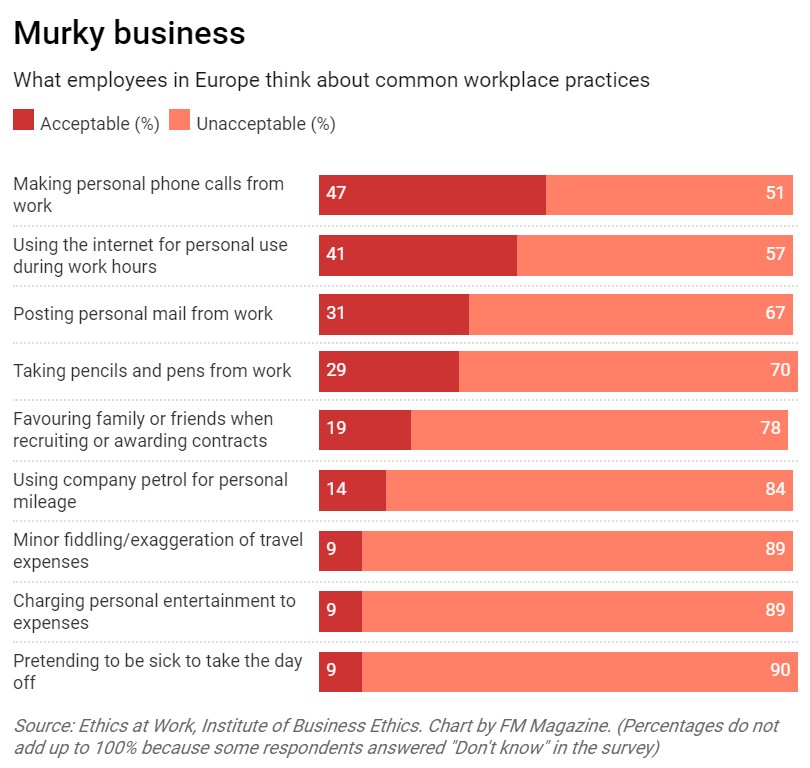 What do these results tell us? They may mean that organisations are preaching one thing and expecting something else from their employees’ everyday behaviour that is not in line with the organisation’s ethical values and code of ethics, Dondé said. Tensions that middle managers face may also be invisible to upper management.

“Very often, someone gets promoted into a managerial position because of their technical skill, because they’re very good at their job. But becoming a manager, you also have additional responsibilities in terms of ethics and … as a role model,” she said. Organisations may not be supporting managers in those roles, and they may lack training to deal with ethical dilemmas, she said.

In light of these findings, increasing ethical awareness and providing ethics training for managers should be part of an organisation’s risk management. “Very often, a line manager is the first port of call of an employee who wants to report and raise some concerns. It’s very important that these managers are able to handle the issues raised by employees in a way that’s effective ... [and] make sure they’re not exposed to forms of retaliation,” Dondé said. European and Australian employees reported fears that speaking up will jeopardise their jobs as one of the top reasons they do not report ethical misconduct.

“It’s a very delicate position for managers to be in, so it’s really important they are equipped with the right tools and they know what to do in that situation,” Dondé said.

What to do in the face of ethical threats

The CGMA Code of Ethics outlines a three-step approach to ethical threats:

Identify threats. Business engagements or work assignments often create different threats to complying with the rules. When you encounter such a threat, that is not specifically addressed by a rule, a principle, or an interpretation, you should determine what the threat is and the significance of it. It’s important to note that the existence of a threat does not automatically mean that you are not in compliance with the rules set out by your organisation. Threats include:

Evaluate significance of threat. In evaluating an identified threat’s significance, you should determine whether the threat is at an acceptable level — a level where a third party who is aware of the relevant information concludes that the threat would not compromise your compliance to rules. You should also consider both qualitative and quantitative factors in evaluating the significance of a threat. For instance, safeguards that are in place may already reduce the threat to an acceptable level.

Identify and apply safeguards. If an identified threat is not at an acceptable level, you should apply safeguards to remove or reduce the threat to an acceptable level. Choosing the safeguards to apply will depend on the circumstances. It may be that one safeguard can eliminate or reduce multiple threats, or it may be that one threat requires the use of a few safeguards. In cases where the identified threat is so significant that no number of safeguards can prevent you from compromising on ethics or rules, the CGMA Code of Ethics recommends declining or discontinuing the service. There are two kinds of safeguards:

CIMA provides free access to more tools, articles, and webcasts on ethics such as a guide to countering fraud and corruption, case studies of ethical dilemmas, and the role of accountants in implementing the United Nations’ sustainable development goals. You can find the latest list of ethics resources here.

— Alexis See Tho (Alexis.SeeTho@aicap-cima.com) is an FM magazine associate editor based in Malaysia.