The four Nordic nations — Denmark, Finland, Sweden, and Norway — are in the top seven countries globally with the lowest perceived levels of public sector corruption, according to a recently published list. Also in the top seven are New Zealand (second), Singapore (third), and Switzerland (also third).

These seven countries scored between 84 and 88 points out of 100 in Transparency International’s recently released Corruption Perceptions Index 2018 (CPI). The scale is from zero (highly corrupt) to 100 (very clean). These countries have been included in the top seven for the past three years running.

The majority of the 180 countries appearing in the index have made little or no progress reducing levels of corruption in recent years, according to Transparency International.

Over the past seven years the levels of corruption in 20 countries have improved, but they have worsened in 16.

For 2018, the Americas region scored 44 on average, with the US dropping four points since a year ago — its lowest score in seven years and the first time it has dropped out of the top 20.

Max Heywood, Transparency International’s head of policy and advocacy, said that “this is a pretty stable index over time, so for a country to fall four or five points year to year is relatively unusual”.

Asia Pacific countries also scored an average 44. Within the region, New Zealand was ranked second highest and Singapore third. At the bottom of the index were Afghanistan (ranked 172nd) and North Korea (ranked 176th).

Sub-Saharan Africa was the lowest-performing region with an average score of 32. 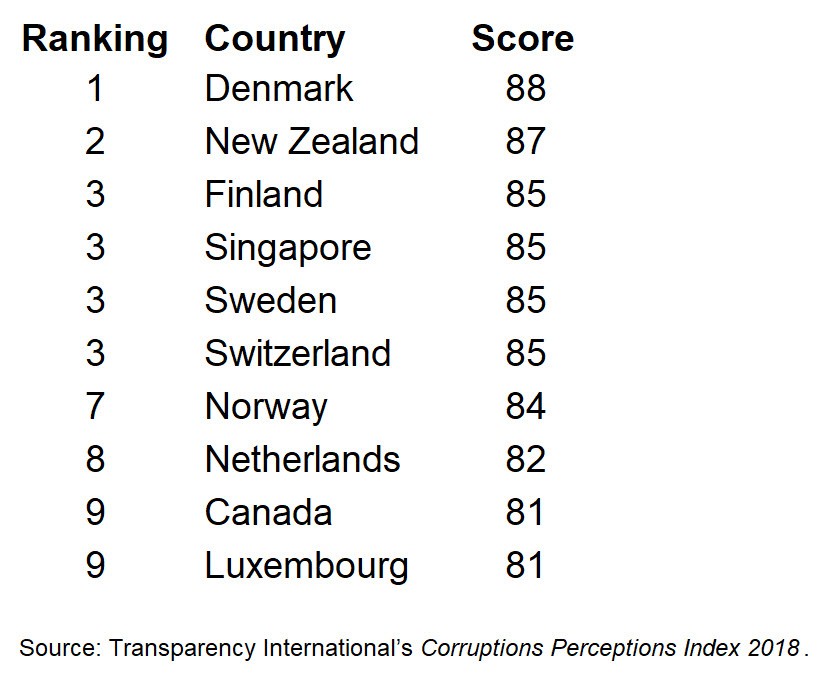 Western Europe and the European Union was the highest scoring region with a 66 average score.

Within the region, the UK fell from eighth to joint 11th with Germany, both with a score of 80.

Robert Barrington, executive director at Transparency International UK, said the UK should be warned against complacency in tackling corruption, “not least with the prospect of post-Brexit pressure to lower standards”.

Also within Europe, the Czech Republic was highlighted for steadily improving its CPI score since 2014, although these gains may be “fragile”, the CPI suggests.

Countries in the Eastern Europe and Central Asia region had an average score of 35, making it the second-lowest-scoring region. The index highlights Armenia — ranked 105th — as a “country to watch” as it starts this year to put in place anti-corruption measures including judicial reforms.

The Middle East and Northern Africa region scored an average 39, with Yemen and Syria in the bottom five countries overall and the United Arab Emirates (23rd) ranked the top-performing country in this region.

Heywood said public sector corruption had an impact on business. He told FM, “It is not feasible to have a thriving business environment — with startups and innovation — in an environment where … the basic nuts and bolts of registering their company name depends on bribery and corruption”.

He added that where public procurement is associated with high corruption risks, there is “a knock-on effect on the whole economy and in terms of attractiveness to investment”.

Large and medium-size businesses, he said, are taking into account the CPI and other risk indexes and “staying away from high-risk environments”.

The CPI measures perceived levels of public sector corruption across 180 countries and territories and draws on 13 surveys of business people and other assessments. The index rates countries on forms of corruption including perceived levels of bribery, diversion of public funds, and conflicts of interest. It doesn’t measure money laundering, which remains a key concern in developed countries, according to Transparency International.