In last month’s column, I explained the OFFSET function, which employs the following syntax:

The arguments in square brackets (Height and Width) can be omitted from the formula, but they will prove to be useful in this article.

For this second discussion, let me extend the formula to OFFSET(D4,-1,-2,-2,3). It would again take us to cell B3, but then we would select a range based on the Height and Width parameters. The Height would be two rows going up the sheet, with row 4 as the base (ie, rows 2 and 3), and the Width would be three columns going from left to right, with column B as the base (ie, columns B, C, and D).

Note that OFFSET(D4,-1,-2,-2,3) = #VALUE! since Excel cannot display a matrix in one cell, but it does recognise it. However, if after typing in OFFSET(D4,-1,-2,-2,3), we press Ctrl+Shift+Enter, we turn the formula into an array formula: {OFFSET(D4,-1,-2,-2,3)}. (Do not type the braces in; they will appear automatically as part of the Excel syntax.) This gives a value of 8, which is the value in the top left-hand corner of the matrix, but Excel is storing more than just that. This can be seen as follows:

I am going to use these ideas to build on the scenario table example I demonstrated last time. This time, I am going to consider a calculation many accountants have to perform regularly: depreciation of a capital expenditure.

Let’s imagine I have been charged with creating a depreciation schedule in an Excel spreadsheet with the following assumptions:

You can follow this example in this Excel file. All cells in yellow are assumptions that may be changed.

I wish to build a depreciation grid to calculate my total amortised cost as follows:

My first challenge is to link the assumptions in cells J21:O21 to the grey cells H30:H35, converting row assumptions into column data. Converting from rows to columns (or vice versa) is known as transposing. There are several ways you can do it, but only one way I truly recommend.

Method 1: Cut and paste a formula

For the purposes of simplification, I am going to assume that we are looking to transpose data from going across a row to going down a column (the concepts are similar if columns are transposed into rows).

This method is very simple. First, create a formula that links to the data to be transposed, say, in the row beneath:

Second, once the formulas have all been created, cut and paste each formula individually into its appropriate position on the spreadsheet:

This is a very simple method but certainly would be an ill-advised approach if you need to transpose 1,000 data points, for example.

However, simplicity is often a highly underrated attribute in modelling. If you have only a few data items and you require the original inputs to remain (in our example, row 12, above), this method can often be deemed “simplest bestest”.

Another very simple approach is to copy and paste special as follows:

In this instance, simply highlight the data and copy the range in the usual way (eg, Ctrl+C). Next, simply select the first cell (ie, the top left-hand corner) of the intended range and Paste Special, Transpose (Alt+E+S+E+Enter). As can be plainly seen from the illustration (above), the formatting as well as the content will be transposed.

This is an ideal approach for copying and transposing data from one source to another where links are not required. Aside from the inherited formatting, the main disadvantage here is that depending upon the nature of the source data and how it is copied, updates in the original data will not flow through to the destination range.

If the data need to be linked to the source, then this approach is probably inappropriate. However, if inherited formatting is all that is putting you off, make the appropriate adjustments to the Paste Special dialog box before pressing OK/Enter, eg, set the dialog box as follows to copy only the formulas before transposing:

On first glance, this looks like the “best” method. Once you discover there is a TRANSPOSE function, you think life is simple and your problems (well, your modelling problems anyway!) are over. Unfortunately, this function is not without its limitations. 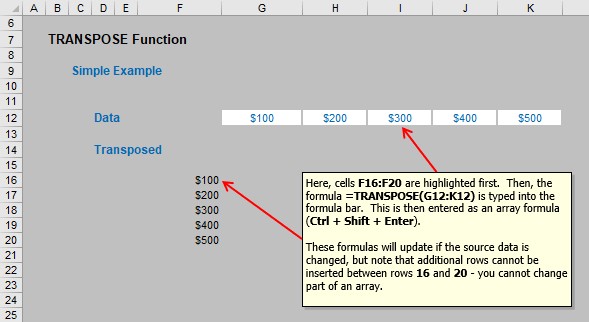 Here, the intention is to transpose the values in cells G12:K12 into the range F16:F20. To do this, simply highlight cells F16:F20, and then type in the following formula:

but rather than press Enter, press Ctrl+Shift+Enter to enter the formula as an array formula.

This method is very simple, as long as you ensure that the destination range contains precisely the same number of cells in the column as there are cells in the source row. If you change the source data, the outputs will update accordingly, too.

So, what’s the problem?

Array formulas can consume memory exponentially, which in turn can soon prevent Excel from calculating correctly, especially if you are working on a Windows 32-bit operating system, which is the platform most businesses employ.

Further, if you wanted to insert additional rows between rows 16 and 20 (eg, to extend the range), you will find that this is not possible:

Interestingly, if you insert columns between G and K in the illustration above, this is possible, but the array formulas will not act like other Excel calculations: Cell references in the TRANSPOSE formulas will not update (so the references will always link to what is in cells G12:K12 in our example). However, if you insert columns before column G, the formula will update. This can be confusing.

Therefore, TRANSPOSE is useful where you wish to protect the destination range’s structure, but it can be seen as inflexible and inefficient, particularly with larger Excel files, slowing calculation times unnecessarily.

Used with the ROWS function (which simply counts the number of rows in a specified range), transpositions may be performed quickly and effectively using OFFSET: 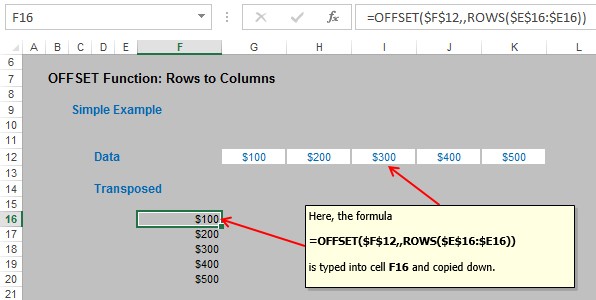 In this example, the following formula has been typed into cell F16:

As the formula is copied down, the number increases in the Columns argument of OFFSET as the number of rows increases. This is a neat trick for transposing without using array formulas and can be seen as a good “general” solution, being quite flexible. The disadvantages here are twofold:

Returning to the example

It is this last method I have employed in my depreciation example:

The formula in cell H30 (highlighted) is

BC_Capex is cell I21. The prefix “BC” in this range name stands for “base cell” and is used to acknowledge the fact that OFFSET is nonauditable, as explained last time. This cell is styled speckled blue to emphasise that this cell must deliberately remain blank and not be deleted. I use this “empty cell” style regularly in modelling.

The reference $E30 points to the label “Year 1”, which is actually the number 1 formatted to look like text. This dispenses with the need to use the ROWS function explained earlier.

Now that I have successfully transposed the assumptions, I can calculate the depreciation grid:

Assuming depreciation is to be calculated on a straight-line basis (ie, the capital expenditure is apportioned equally across all periods it will provide economic benefit), the depreciation may be calculated across the grid using the formula in cell J30:

It is a simple method, recognised by many financial analysts and accountants. The main problem with this method concerns how many calculations are required in the grid. For example, if you built a 20-year monthly model, you would need 240 rows by 240 columns in the grid — a total of 57,600 calculations!

This is where OFFSET can come to the rescue…

In this example, row 44 contains the formula =MIN(J42,Economic_Life), which restricts the period counter to not exceed the Economic_Life (here, four years). With row 48 calculating each period’s representative depreciation, the total depreciation charge in row 50 becomes trivial. For example, the formula in cell J50 is:

This formula simply refers to the corresponding periodic charge in row 48 and then sums a range of cells with a width defined by the value in cell J44.  The negative sign is a directional indicator: It is counting a number of columns going from right to left, rather than left to right. This means that:

A simple comparison of the two approaches to depreciation will determine that the two methods give the same result. The OFFSET approach may not be as transparent upon first glance, but it does reduce the number of formulas required.

When I model depreciation in reality, I usually model the first asset class both ways so that end users can see they give the same result. After that, I adopt the OFFSET approach exclusively, as end users now trust this less familiar approach.

I recommend if you are not familiar with OFFSET, you should do the same. Play with the function for a while until you trust it and realise how useful it can be in your spreadsheets going forward.