CIMA published its "Ethical Guidelines", the first incarnation of what we now know as the CIMA Code of Ethics, 27 years ago. Fast-forward almost three decades to today, and the current 2015 CIMA Code of Ethics has been reviewed and refreshed in line with the International Ethics Standards Board for Accountants' (IESBA) Code of Ethics for Professional Accountants, which became effective in June this year. The new CIMA Code incorporates all the developments in IESBA's thinking about ethics and independence over the last five years into a single document, including the previously adopted provisions relating to noncompliance with laws and regulations (NOCLAR). However, the NOCLAR provisions (contained in Section 290 of the new Code) apply only to CIMA members; CGMA designation holders who are AICPA members are not required to comply with this section, but must comply with certain other parts of the Code.

The foundations of ethical accounting practice — the fundamental principles of integrity, objectivity, professional competence and due care, confidentiality, and professional behaviour — are still the cornerstone of CIMA's Code of Ethics. Indeed, they would be familiar to readers of the first Ethical Guidelines in 1992. However, the new CIMA Code, which comes into force on 1 January 2020, is easier to understand and easier to use than previous versions. It also provides greater transparency for members about when CIMA will take action to enforce breaches.

What exactly has changed?

First, the Code has a new look and layout (see the chart, "At a Glance: Summary of Changes"). It adopts a new structure and format throughout, consisting of requirements and supporting application material. The purpose of the restructure is to improve clarity and navigation, providing:

The parts of the CIMA Code have been renamed as well: Part A of the current Code becomes Part 1, Complying With the Code, Fundamental Principles and Conceptual Framework; Part B becomes Part 3, Professional Accountants in Public Practice; and Part C becomes Part 2, Professional Accountants in Business (including CGMA designation holders). The International Independence Standards — Parts 4A and 4B of the revised IESBA Code, which set out additional material that applies to professional accountants in public practice when providing assurance services — are incorporated as an annex to the new CIMA Code.

The changes are not merely cosmetic. Dealing with each of the new Parts 1, 2, and 3 in turn, there are a number of substantive changes.

Part 1, Complying With the Code, Fundamental Principles and Conceptual Framework

The fundamental principles within the Code — integrity, objectivity, professional competence and due care, confidentiality, and professional behaviour — as well as the categories of threats to harm — self-review, self-interest, advocacy, familiarity, and intimidation threats — remain unchanged from the current 2015 CIMA Code. Also unchanged is the overarching requirement to apply the conceptual framework to comply with the fundamental principles via adoption of the three-step process involving identifying, evaluating, and addressing threats, and where applicable, independence.

The conceptual framework, however, has undergone some revisions to strengthen it (Section 120). These include new requirements to remain alert for new information that may result in the identification of a new threat, and to step back to review whether threats have been addressed as part of the professional accountant's responsibility to do so properly.

The enhanced conceptual framework now includes a more robust definition of safeguards, which emphasises that safeguards are applied to reduce threats to an acceptable level but may not in certain circumstances eliminate those threats entirely (R120.10). Conditions, policies, and procedures are no longer considered as safeguards. Examples of safeguards are now more tightly integrated within relevant parts and sections of the new Code.

New material has been added to the Code to help professional accountants better understand what to consider in exercising professional judgement (R120.5).

The substantive changes to Part 2 of the new IESBA Code since the version adopted by CIMA fall into four categories:

Preparation and Presentation of Information (Section 240)

This section now contains more comprehensive provisions addressing PAIBs' responsibilities when preparing and presenting information. There is a new prohibition on exercising discretion when preparing or presenting material with an intention to mislead or inappropriately influence contractual or regulatory outcomes. The guidance to members about disassociating from misleading information has been enhanced.

Inducements, Including Gifts and Hospitality (Section 230)

This section has been revised extensively to:

There is a new requirement that a professional accountant (in business or public practice) should not offer or accept an inducement prohibited by laws and regulations — for instance, those related to bribery and corruption.

Responding to Non-Compliance With Laws and Regulations (NOCLAR) (Section 290)

These provisions have been effective since 15 July 2017. The CIMA website previously signposted members and CGMA designation holders to the IESBA's guidance, but NOCLAR provisions have now been incorporated within CIMA's new Code.

Section 290 applies only to CIMA members; CGMA designation holders who are AICPA members are not required to comply with it.

The major substantive change in Part 3 of the Code clarifies how the provisions of Part 2 and Part 3 work together:

There is a new requirement and clearer guidance for PAPPs that relevant PAIB provisions in Part 2 apply to them when they perform professional activities pursuant to their relationship with the firm, whether as contractors, employees, or owners of the firm. 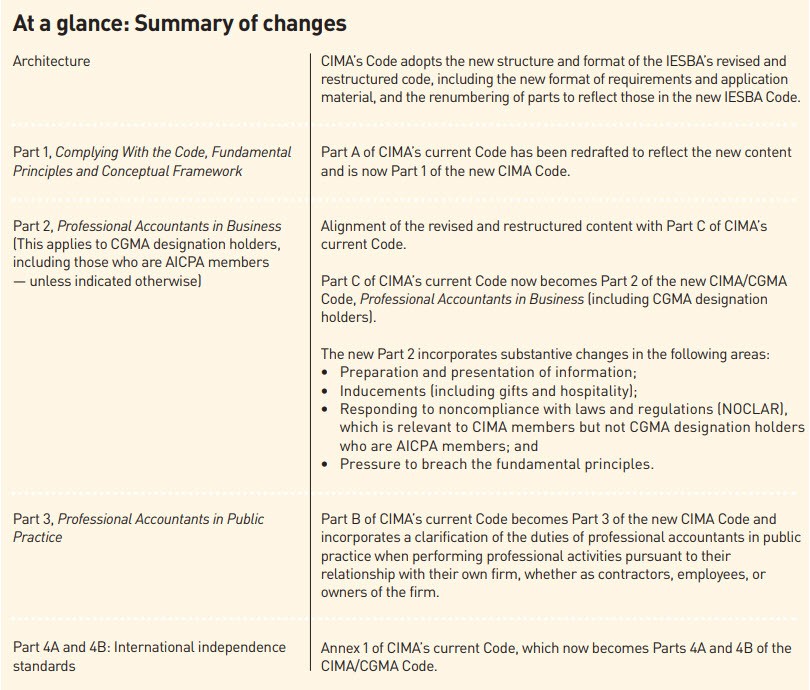 It is fitting that in its 100th year, CIMA publishes the new, improved Code of Ethics with a view to equipping all CGMA designation holders with the tools to surmount the new ethical challenges of the 21st century. The core professional values of management accounting have remained a constant for members since the Institute came into being in 1919 and throughout the various statements of our ethical principles. The new Code reinforces those values and supports all CGMA designation holders in facing the professional challenges of the new decade.

However, 1 January 2020 — the implementation date for this latest version of the Code — is a waypoint rather than a destination. As a member of the International Federation of Accountants (IFAC), we are committed to ensuring global professional standards are maintained at the highest level through the adoption of the new provisions of the IESBA Code, as and when further substantive changes and significant improvements are made to it.

Peter Steel is vice-president—Professional Standards and Ethics at the Association of International Certified Professional Accountants. To comment on this article or to suggest an idea for another article, contact Ken Tysiac, FM magazine's editorial director, at Kenneth.Tysiac@aicpa-cima.com.