Culture has risen up the agenda in recent years for businesses, investors, and regulators alike. Companies are now faced with the challenge of how to measure, monitor, and report on it.

Under the revised UK Corporate Governance Code published by the Financial Reporting Council (FRC), companies with a premium UK listing will be required to comply with new provisions regarding the monitoring and assessment of their company culture — or, if not, to provide an explanation as to the rationale for departure from recommended practice.

Building on the recommendations of its 2016 report Corporate Culture and the Role of Boards, the FRC's new code calls for the board to "assess and monitor" the culture of its company and "seek assurance that management has taken corrective action" in cases where it is "not satisfied that policy, practices or behaviour throughout the business are aligned with the company's purpose, values and strategy". The board's activities, and any action taken in this area, should be explained in the company's annual report.

The revised Guidance on Board Effectiveness, which accompanies the code, includes some useful advice in this regard for businesses throughout the world, including a list of attributes for a healthy culture, sources of culture insights, and questions for boards to ask.

In 2016, an EY survey found that only 19% of FTSE 350 board directors felt that the primary accountability for their company's culture sat with them. The same survey report, Is Your Board Yet to Realise the True Value of Culture?, found that the vast majority of FTSE 350 companies (88%) did not provide detailed information on culture in their public filings or annual reports, leaving 81% of investors feeling that they had insufficient information to assess the cultures of the companies they were being asked to back.

Yet, when we examine the annual reports of listed companies as a whole, what is missing is not a willingness to discuss the culture of the business, but rather an ability to assess that culture in any meaningful way.

The result is that the abundance of culture buzzwords ("honesty", "integrity", "trust") in the annual reports of the FTSE 100, for example, stands in stark contrast to the ethical scandals some of these companies have suffered within the same year and reflects their lack of any concrete system for measuring the prevalence of these values in their company.

Investors are also putting pressure on companies to provide information on culture, with some suggesting that culture indicators might be as useful, if not more so, than traditional financial reporting when it comes to assessing the long-term viability of an organisation.

How it can be done

The company where I work, GoodCorporation, which consults on ethics, compliance, and corporate responsibility, has conducted tens of thousands of interviews over the past 18 years with stakeholders of companies all around the world as part of our assessments of their ethical business practices.

From this experience, we have identified ten key drivers (see the chart, "10 Key Drivers") that we believe underpin responsible decision-making in an organisation, large or small, and engender the kind of culture that mitigates the risk of misconduct.

Each driver is supported by a collection of statements that can be used to assess its prevalence in more depth. For example, the driver "Management trusted to do the right thing" would be supported by statements such as "my manager talks to me in an open and honest way", "my managers would not bend the rules to get a job done", and "poor behaviour is properly dealt with in my organisation". 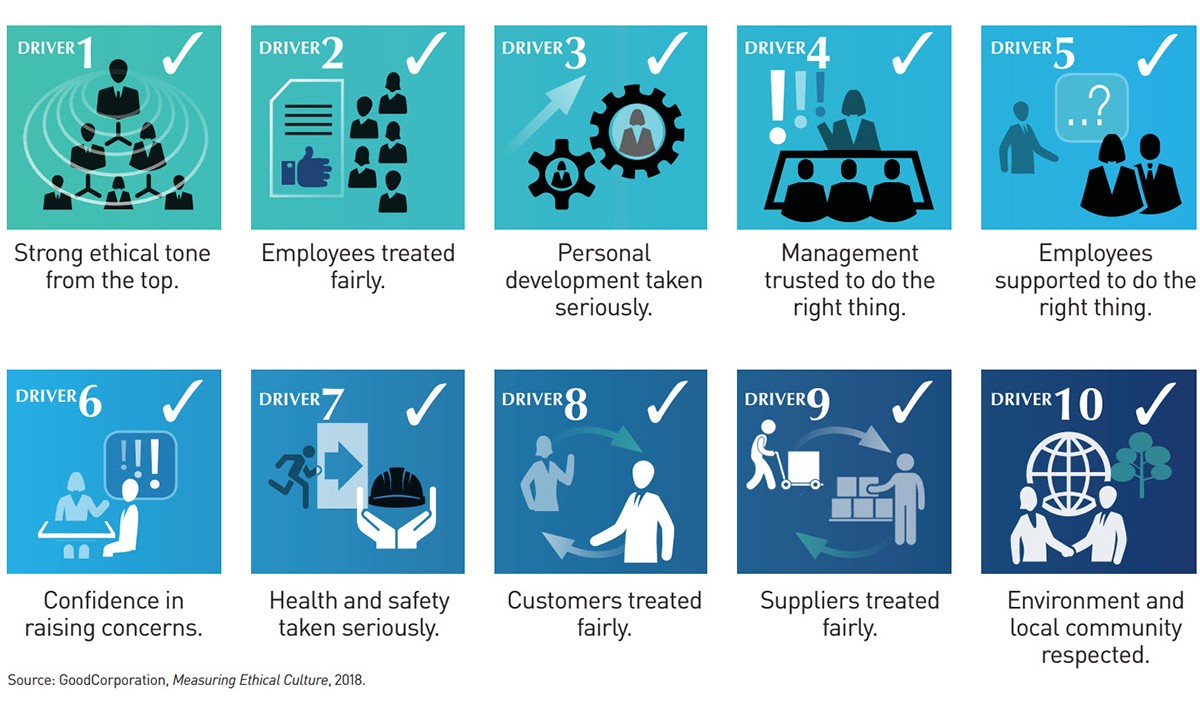 Employees can be asked to what extent they agree with each statement on a five-point scale (strongly agree, agree, don't know, disagree, strongly disagree). The overall percentage of "agree" responses relative to the overall percentage of "disagree" responses provides an indicator of how well embedded each driver of an ethical company culture is in a given organisation.

The combined results for all ten drivers can then be used to give an overarching grade showing how closely the company's behaviour aligns with the key features of an ethical company culture, the Net Ethical Culture (NEC) score.

To provide an initial benchmark against which companies can begin to measure their culture in this way, GoodCorporation has used this methodology to conduct a survey of the UK workforce. Two thousand employees across all levels of seniority, and from a representative sample of the British workforce, were surveyed using questions based on the 25 statements indicative of an ethical company culture.

Companies can assess their own performance against this benchmark as a means of assessing, monitoring, and, ultimately, reporting on their culture.

The new Corporate Governance Code states that "all directors must act with integrity, lead by example and promote the desired culture". This is borne out by our assessment work, during which it is often clear that, unless good examples are set by senior managers, companies will struggle to embed good practice further down the chain of command.

Ethical policies and procedures need to be visibly owned and embodied at the top of the organisation for employees to get a sense that theirs is an environment where workers will be supported to do the right thing and any poor behaviour will be addressed.

It was concerning, therefore, that our survey of UK employees across all levels of seniority found that only half the UK workforce feel their senior managers really believe in doing the right thing at work. Indeed, one in five of those surveyed actively disagreed with this statement.

Moreover, over a quarter of those surveyed believed their managers would bend the rules if it was necessary to get the job done. Such a response could be indicative of a "success at all costs" mentality, which could lead to a costly scandal if left unchecked.

The extent to which staff feel able to raise their concerns about unethical behaviour when they come across it is critical to any healthy corporate culture. In our assessment work, we often come across employees who fear open hostility or subtle forms of retaliation from managers if they raise a concern.

Organisations that encourage their staff to speak up confidentially and without fear of reprisal are more likely to learn of internal issues earlier, allowing them to take remedial action before an external scandal ensues.

In this context, it was concerning to see among the findings of our research that only six out of ten UK workers felt able to raise concerns about poor or unethical behaviour. One in five said they were concerned that, if they raised an issue, it would not be dealt with fairly.

Just over one in six people said they were not confident that their company would protect them if they spoke out to raise a concern.

Companies that neglect these key aspects of their workplace culture not only risk alienating those members of the workforce with an interest in improving the day-to-day ethics of the business, but they also miss out on their easiest opportunities to pick up on cultural issues before they become systemic problems or costly, reputation-damaging scandals.

The new Corporate Governance Code also states that companies should have a means for the workforce to raise concerns in confidence and that this should be reviewed to ensure there is appropriate investigation and follow-up. If such arrangements are not in place, companies need to provide an explanation.

Among the most interesting findings from our research is that scores for ethical workplace culture tended to be inversely proportional to company size.

Smaller companies recorded a higher prevalence of all ten ethical culture drivers and responded more positively to most of our 25 supporting statements.

It seems that larger organisations have more work to do when it comes to improving workplace culture and could perhaps learn some lessons from smaller operations. One inference from this could be that senior leaders working across multiple sites should consider analysing the cultural strengths of smaller business units and then determining how these can be scaled up to meet the cultural needs of their colleagues working in bigger teams elsewhere.

What should be done next

The research set out here offers a starting point for companies wishing to meet the new requirements to assess, monitor, and report on their workplace culture.

It provides a methodology for gaining an overview of the ethical soundness of a company's culture and a comparison with the country average.

However, to provide meaningful reporting, companies will need to go further. Although surveying can provide a useful map of a company's cultural landscape, deeper digging will be required to truly get to grips with the everyday personal experiences behind the statistics, which provide the best indication of how problems have arisen and, therefore, how they can be most effectively resolved.

Companies will therefore need to combine any surveying with face-to-face interviews designed to explore the perspective behind each employee's responses in a neutral environment. Equipped with this combined statistical and contextual analysis of their workplace culture, companies will be in a position to move beyond the buzzwords and report meaningfully on the action they have taken to monitor and assess the culture of their business, ensuring that it is in line with values they wish to promote.

The challenge will then be deciding how to act on the deficiencies this process uncovers. However, one thing is for certain: We now know more than ever about the practical steps that companies can take to pinpoint their cultural weaknesses and the risks faced by those that fail to do so.

Michael Pollitt is a business ethics consultant at GoodCorporation, an adviser in the fields of business ethics, compliance, and corporate responsibility. To comment on this article or to suggest an idea for another article, contact Neil Amato, an FM magazine senior editor, at Neil.Amato@aicpa-cima.com.