Prices in the most volatile segment of ocean shipping are collapsing, but top retailers like Walmart and Home Depot should not expect relief until the spring contract renegotiation season, industry experts said.

Spot rates, which cover anywhere from 10% to 40% of ocean container shipments and are considered a key indicator of the industry's health, are in free fall as recession looms and the pandemic-fuelled US import bubble deflates.

The cost to send a container from Asia to the US on the demand-sensitive spot market has tumbled more than 80% from its September peak above $20,000 for a 40-foot container, according to freight booking platform Freightos. 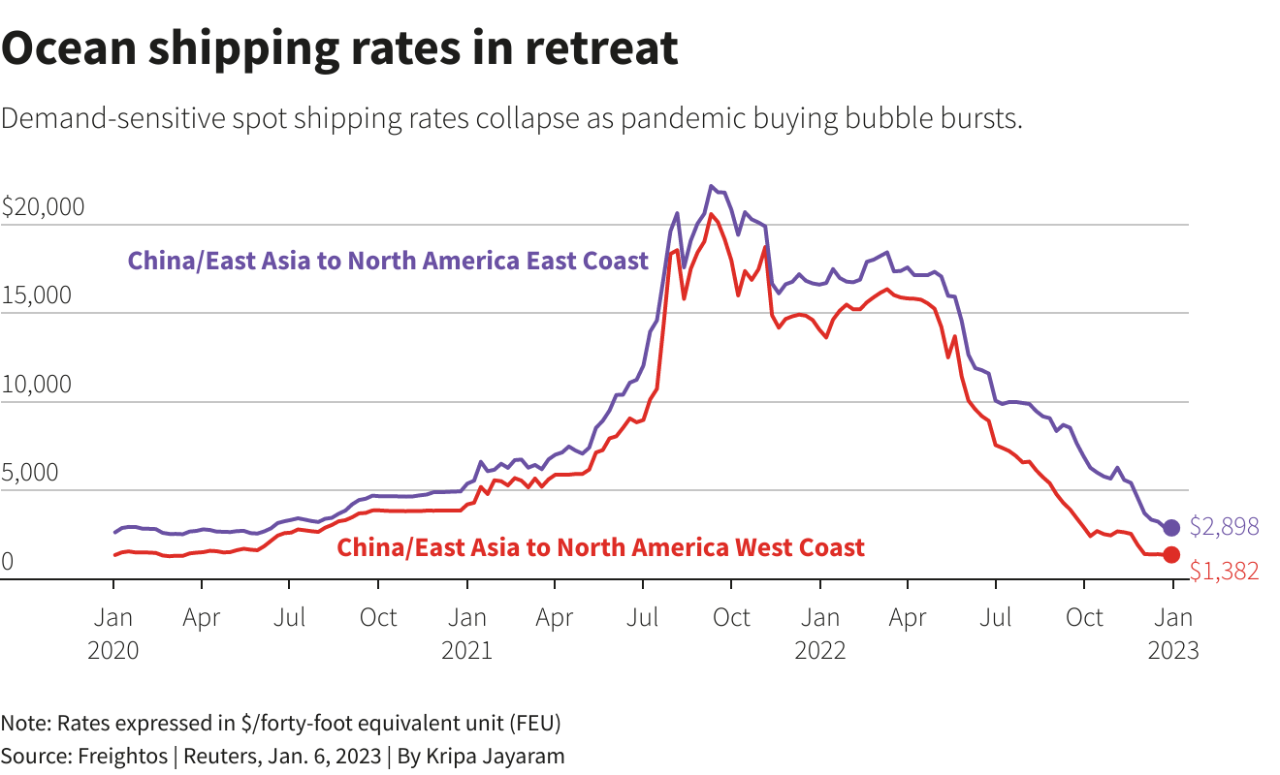 Major carriers like Mediterranean Shipping Co. (MSC) and A.P. Moller-Maersk also are expecting delivery of hundreds of new container ships, which amplifies risk as carriers already have more ships than they need to handle shrinking demand.

"There is sense of payback-time in the market after the COVID years, where carriers have been in absolute control," said Peter Sand, chief analyst at air and ocean freight rate benchmarking platform Xeneta.

Nonetheless, top customers like Walmart, Home Depot, and Amazon.com will not necessarily dictate terms during contract talks that typically happen around May, experts said.

This is partly because shippers that move thousands of containers every year want predictable pricing.

Big shippers "go into their buying season ... wanting to know what their freight is going to cost. They're not interested in playing the [spot] market" by shopping for lower rates, shipping expert John McCown said.

At the same time, Maersk and other carriers told investors they would continue to prop up rates by cancelling voyages to match shrinking demand. They are also scrapping small, old "rust buckets" to cut capacity.

That means shoppers will suffer from higher prices a bit longer, experts said.

"The American consumer should not be expecting that this is going to lead to massive price relief. That's just not going to happen," said Jason Miller, Ph.D., associate professor of supply chain management at Michigan State University.

Carriers raised rates and reaped record profits during the pandemic shipping surge because of a spike in demand for shipping services. Many carriers prioritised loads with higher spot rates and bumped containers from overbooked ships, leading to an increase in the use of the spot market.

However, this trend began to shift toward the end of last year because of a drop in the import of retail goods such as furniture, appliances, and apparel.

Meanwhile, long-term contract rates finished 2022 about 20% lower than the pandemic peak of more than $8,000 per container, according to maritime consultancy Drewry, which expects contract rates to halve in 2023. That forecast would put rates at about $3,200, versus the pre-pandemic rate of around $1,500.

"It's kind of like inflation," he said. "It never really goes all the way back down."