For this article, we take a familiar modelling scenario and extend it (please refer to the downloadable Excel file for a modelled example).

Imagine you had a dataset similar to that shown in the screenshot “Example Dataset,” below.

Your task is a simple one: For any given month and any given item, return the corresponding value (a so-called two-way lookup). I shall ignore XLOOKUP, as it’s not in all versions of Excel presently, so I’ll use the functions INDEX and MATCH instead. As a reminder:

Essentially, INDEX(array, row_number, [column_number]) returns a value or the reference to a value from within a table or range (list).

INDEX can work in two dimensions as well (hence the column_number reference) — see the screenshot “Table Array,” below.

MATCH(lookup_value, lookup_vector, [match_type]) returns the relative position of an item in a row or column vector that (approximately) matches a specified value. It is not case-sensitive.

The third argument, match_type, does not have to be entered, but for many situations, I strongly recommend that it is specified. It allows one of three values:

MATCH is fairly straightforward to use.

In the screenshot “Example MATCH Function,” below, MATCH(“d”,F12:F22,0) gives a value of six [6], being the relative position of the first “d” in the range. Note that having match_type 0 here is important. The data contains duplicates and is not sorted alphanumerically. Consequently, match_types 1 and -1 would give the wrong answer: 7 and #N/A, respectively.

Whilst useful functions in their own right, INDEX and MATCH combined form a highly versatile partnership. Consider the common situation shown in the screenshot “Balance Sheet Summary,” below.

equals 2020 in one step. Note how flexible this combination really is. We do not need to specify an order for the lookup range; we can have duplicates, and the value to be returned does not have to be in a row/column below/to the right of the lookup range (indeed, it can be in another workbook, never mind another worksheet).

However, this approach considers one criterion only (in the above example, ascertaining when the first misbalance occurs). What happens if there is more than one criterion? This can depend upon how the data is presented.

Consider pivoted data; ie, where data is understood by cross-referencing criteria in two or more dimensions. Here, in essence, the output is similar to results produced by a PivotTable. For example, consider the illustration in the screenshot “Pivoted Value Illustration,” below. 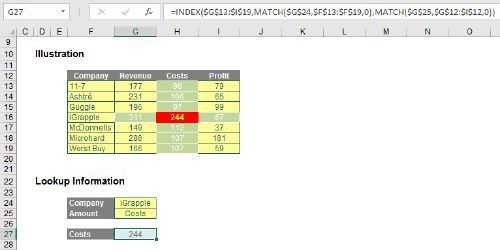 In this example, I have constructed a formula to determine the costs for iGrapple, a new fictitious company. The formula here uses INDEX(MATCH, MATCH) syntax, as it identifies the relevant row and column of the table to return.

The intersection of the row and column selected returns the pivoted value.

Returning to our scenario

Therefore, in our situation (see the screenshot “Example Dataset,” below) to determine a value, we would simply use the generic formula

But what if the number of rows and columns were to extend? Table_Data (the array of input cell values), Item_List (the vertical list of items in grey), and Month_List (the horizontal list of months in grey) would all be of variable size. It’s not just the ranges that need extending; it’s the idea, too.

Whenever we have extendable ranges, we should use a Table. I highlight the table and go to Insert -> Table (CTRL+T) — see the screenshot “Insert Table,” below.

Ensuring you have checked “My table has headers”, our table is converted into a Table.

Four things have changed (only two of which are visible):

1. Filter dropdowns have been added to the first row. We don’t require these, so these may be removed by highlighting the table and clicking on the Filter button in the Sort & Filter section of the Data tab on the Ribbon (ALT+A+T).

2. The top left-hand cell has had text added, which defaults to the highly imaginative “Column1”. This is because all columns (fields) in a table must be named and contain text, not formulas. This must not be deleted, but it will remain invisible in my example due to the cell formatting.

3. Alternate rows are shaded differently. Again, this is not noticeable, as I have already included my own formatting, which overwrites this formatting. If my formatting were to be removed (eg, change the cell style to “Normal”, ie, Home -> Styles -> Normal), this shading would become apparent.

4. In the bottom right-hand corner, a green, irregular hexagon is visible, which highlights the fact the table may be extended both to the right and downwards; ie, we have a range that may be extended.

I now name this table “Data” (simply name it in the Table Name: section of the Properties group on the Table Design tab of the Ribbon). Then, on a separate sheet I will call “Lookup Data”, I have created two formulas (see the screenshot “Lookup Data,” below). 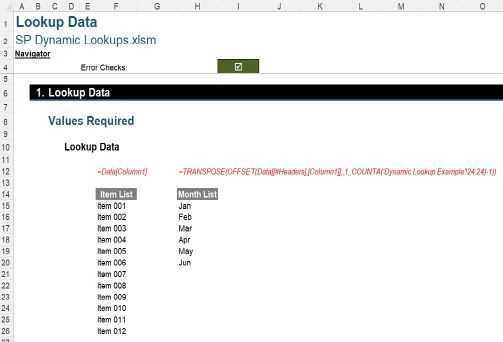 Just a minute! I have stated I won’t use XLOOKUP because it’s not in all versions of Excel, and then I quite merrily use dynamic arrays, which are even less prevalent in Excel.

You see, what I am not doing here is not essential, and dynamic arrays will not be used to generate the formulaic solution. However, creating these lists demonstrates the key concept I shall use to construct my formula. Allow me to explain.

To generate the “Item List” (column F in the “Lookup Data” screenshot), I have simply used the formula

This is quite simply the contents of the Column1 field in our Data table. I created the calculation simply by highlighting the contents (eg, Items 001 to 012 in our example). Generating a columnar list is simple; unfortunately, row lists are trickier — and this is where my second formula in column H comes in:

You should note that OFFSET(Data[[#Headers] appears automatically when you click on the header in the first column in the “Data” Table. This is merely the syntax for referring to cells in Tables, known as structured referencing.

TRANSPOSE and COUNTA are fairly simple to explain:

• TRANSPOSE does what it says on the tin: It swaps rows and columns around so that rows become columns and vice versa.
• COUNTA counts the number of nonblank cells in a range.
Therefore,

counts the number of blank cells in row 24 (which is the row containing the table headings in my example) and subtracts one [1] so that the effect of the required text in the first column of the table (Column1) is ignored. This presupposes there is no other text, value, or formula on this row.

The arguments in square brackets (Height and Width) can be omitted from the formula — but they will prove to be useful in this article.

OFFSET(A1,2,3) would take us two rows down and three columns across to cell D3. Therefore, OFFSET(A1,2,3) = 16 (see the downloadable screenshot. “OFFSET Function Example 1”).

Let’s now extend the formula to OFFSET(D4,-1,-2,-2,3). It would again take us to cell B3, but then we would select a range based on the Height and Width parameters. The Height would be two rows going up the sheet, with row 3 as the base (ie, rows 2 and 3), and the Width would be three columns going from left to right, with column B as the base (ie, columns B, C, and D).

Note that OFFSET(D4,-1,-2,-2,3) = #VALUE! in some versions of Excel that do not support dynamic arrays, since in these versions Excel cannot display a matrix in one cell, but it does still recognise it. This can be seen as follows:

Returning to our scenario (again)

Now that our functions are understood, the second formula is easier to follow (see the screenshot “Lookup Data,” below): 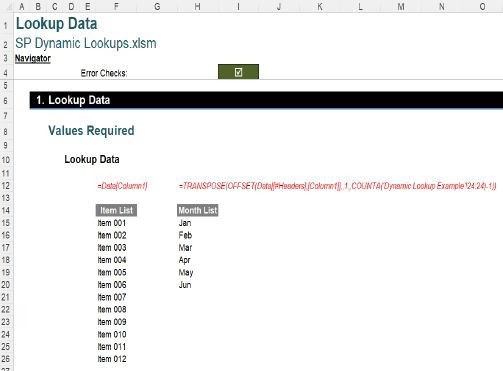 returns the cell one column to the right of the Column1 header (ie, Jan). I have used this expression as the first column, which will always be consistently identified as Column1, but it’s possible for all other headers to be renamed.

The extension of this formula

creates a range starting with the second column header (Jan) and extending it to be COUNTA(‘Dynamic Lookup Example’!24:24)-1 columns across; ie, it will be of the precise width of the nonblank range excluding the first column (Column1).

This is then wrapped in TRANSPOSE:

Since the OFFSET formula is containing a row range, the result will be expressed across a row; using TRANSPOSE propagates this result down a column instead.

These two ranges are dynamic arrays, so for versions of Excel that support dynamic arrays, these ranges may be referred to using the formulas =F15# and =H15#, respectively (as # is the spill operator in dynamic Excel). And these references may be used to create data validation lists, should you so wish.

However, if you don’t have dynamic arrays, keep reading. It’s a “nice to have” — not an essential element of the solution.

The dynamic lookup formula is “easy” from here (see the screenshot “Lookup Assumptions,” below):

Rather than use the INDEX(MATCH, MATCH) approach detailed earlier, I use OFFSET(MATCH, MATCH), with the base cell being the first column header, Data[[#Headers],[Column1]], which is simply the structured reference for Column1 (cell F24 in our example file). The two MATCH computations simply use the two lists generated earlier to find the correct row and column displacements.

This is another common problem in Excel. All too frequently, modellers forget to put the reference table in an Excel Table. For those that manage this, many are unsure how to reference a row dynamically. The OFFSET(COUNTA) approach has been available for many years, but few ever use this function combination.

Liam Bastick, FCMA, CGMA, FCA, is director of SumProduct, a global consultancy specialising in Excel training. He is also an Excel MVP (as appointed by Microsoft) and author of Introduction to Financial Modelling and Continuing Financial Modelling. Send ideas for future Excel-related articles to him at liam.bastick@sumproduct.com. To comment on this article or to suggest an idea for another article, contact Oliver Rowe at Oliver.Rowe@aicpa-cima.com.