For those of you who read my articles regularly, you will have realised I have a sense of humour. Not a particularly good one, but it does exist. When people ask me what I do for a living, I tell them I work in the modelling industry. It’s fun to watch them recoil confused as they take in my physique and my alleged job.

Bearing this in mind, the focus of this column is on Excel modelling with curves — in particular, S-curves: 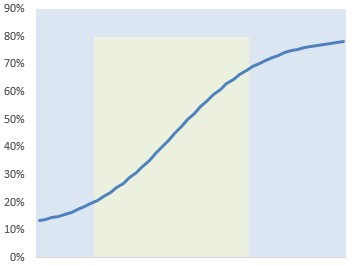 An S-curve is simply a graphical depiction of cumulative data for a project — such as costs, market share, elapsed time, or some other KPI, usually plotted against time. From the above illustration, the reason it’s called an S-curve should be obvious (although some argue that the “S” actually stands for “sigmoidal”, but those are technical spoilsports). Typically, cumulative projections analysed in this manner present in the shape of an “S”.

This type of curve often takes shape as initial traction is often slow and completion can drag on too, with the rapid acceleration in progress (highlighted by the lighter area in the graphic, above) coming in between these two endpoints. Acceleration is gained as costs escalate, market share is gained, etc., but this cannot progress forever, and eventually it slows down once more. The point at which deceleration commences is often (but not always) at the midpoint, and this point of maximum growth is often referred to as the point of inflection.

This type of chart is therefore key in budget forecasting and confirming projects are on track. Therefore, they are frequently used to measure progress, evaluate performance, and make cash flow forecasts. This means you need to be able to model an S-curve.

Obviously, S-curves are only an approximation, and “real data” is very unlikely to ever perfectly fit an S-curve. This is because the underlying mathematics may cause the first and last periods to “jump” (these sort of curves are often perceived to have infinite tails) and because later periods may also see a project go into terminal decline (eg, lose market share, be reimbursed costs, etc.).

The aim here is to provide a simple example — not create a beast that can be tailored for any situation, spikes, normalisations, etc. The aim is to get the concept across — you can then modify the maths as you see fit thereafter.

As usual, I provide an Excel example — and make use of Excel 365 this time as I use dynamic arrays to “spill” my formulas. But first, we need inputs: 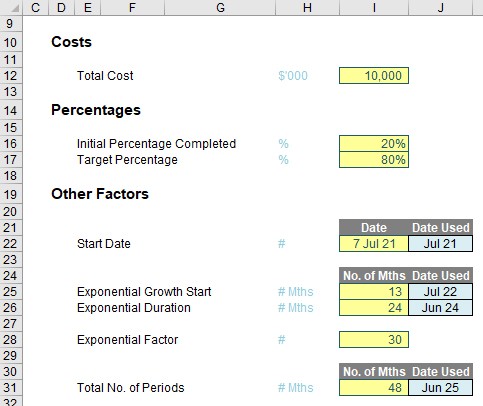 Here, I assume I am considering a forecast of total costs (cell I12, given the range name Total_Costs), with costs of 20% (cell I16, Initial_Percentage_Completed) already accounted for.

The start date of this forecast is given by I22, although it is cell J22 that is used for the formulas. This “Date Used” cell is named Start_Date and is defined as

Similarly, the total number of periods is input in cell I31 (No_of_Periods), which generates the final date in cell J31, given by the formula

The exponential growth start (cell I25, named Exp_Growth_Start_Month_No) specifies the period number where the period of rapid acceleration starts. This is given by the date calculated in cell J25 (Exp_Growth_Start), namely

Similarly, the duration of this accelerated growth is input in cell I26 (Exp_Duration_in_Months), which then calculates the end month in cell J26 (Exp_Growth_End), as shown in the formula

The only other factor here is the input value in cell I28 (Exp_Factor, which is not a TV show!), which derives the level of “bend” in the accelerated section. Pictorially, a lower value will give a “straighter” interaction, 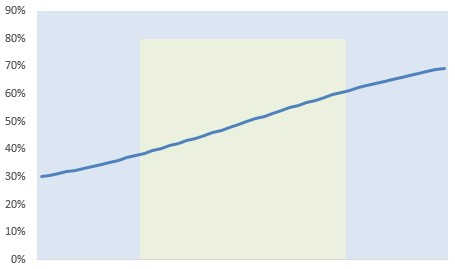 whereas a higher value will accentuate the curve.

You should also note that this may affect the values outside the range of accelerated growth too, depending upon the calculations used.

This brings me nicely on to discussing the formulas necessary:

Apologies for the smaller second image above, but hopefully, you “get the picture”.

Here, because I am using Excel 365, I have decided to use dynamic arrays to propagate the calculations. For instance, the formula in cell J40 is given by

which will generate a horizontal counter between one [1] and the No_of_Periods (48, note the second image above is truncated). If you don’t have dynamic arrays, you may just add a simple counter or else a formula such as

in cell J40 instead.

The date in cell J41 simply converts the counter into the end of the appropriate month:

The formula in cell J42 defines the curve:

Now you see the reason for using range names. There are several formulas that can be used to generate an S-curve, and I have elected to use the above one. Essentially, the formula relies upon several factors:

This formula derives the cumulative percentage, and total costs — as in this example — can be calculated in cell J44 simply by multiplying this percentage by the appropriate figure:

This leaves only the calculation in row 43 to be explained. This “Exponential Marker” is simply a graphical device to identify the period of accelerated growth. For example, the formula in cell J43 is given by

This formula identifies when the counter is in the exponential growth period and displays the Target_Percentage, otherwise #NA(), so that the data will not be displayed on the chart, regardless of the chart type used.

Do note the use of using two flags, ie, J41#>=Exp_Growth_Start and J41#<=Exp_Growth_End, multiplied together, rather than using an AND expression. Arrays and logical functions do not work well together — but that’s a story for another day…

The chart can be generated reasonably easily from this data:

The chart title has been derived by adding a Chart Title, clicking on it, and typing

in the Formula bar (best done by simply clicking on cell N10). This cell is “hidden” behind the chart and the formula

has been typed into this cell to derive the dynamic title.

However, if you want the chart axes to be more dynamic so that changing assumptions automatically changes the chart, eg,

you will need to get cleverer. Do you see how the x-axis (horizontal axis) has changed scale so fewer dates are displayed? To do this, we need the OFFSET function.

You may recall the OFFSET function, which employs the following syntax:

One of the arguments in square brackets (width) will be key here — and I will explain that momentarily.

OFFSET(A1,2,3) would take us two rows down and three columns across to cell D3. Therefore, OFFSET(A1,2,3) = 16, as illustrated in the screenshot below.

Let’s extend the formula to OFFSET(D4,-1,-2,-2,3). It would again take us to cell B3, but then we would select a range based on the height and width parameters. The height would be two rows going up the sheet, with row 3 as the base (ie, rows 2 and 3), and the width would be three columns going from left to right, with column B as the base (ie, columns B, C, and D).

Note that OFFSET(D4,-1,-2,-2,3) = #VALUE! in versions of Excel that do not support dynamic arrays, since Excel cannot display a matrix in one cell, but it does recognise it. More interestingly:

Here, it is the width factor in particular that will help us create a dynamic chart.

Returning to the chart

For each row of our chart data, shown in the screenshot above, I need to create a dynamic range. I can do this using “Defined Name” in the Formulas tab of the Ribbon:

This calls the “New Name” dialog: 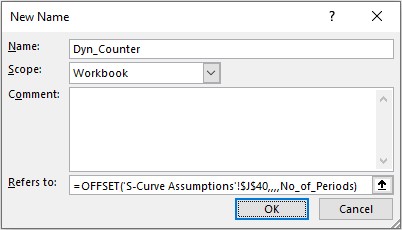 Here, I have created the following (dynamic) range names:

These define ranges starting in column J, but vary their width, depending upon the No_of_Periods specified — simple!

These range names can then be used as the references for the chart. For example, if I were to edit the chart series of the chart in our example file, you would see

Note that the range has to refer to the name of the workbook as well — not just the range name. This is a requirement for dynamic range names to work (it is a point of Excel syntax).

The above highlights just one type of exponential/S-curve formula that could be employed. As mentioned earlier, S-curves should only be viewed as an approximation, and “real data” is very unlikely to ever perfectly fit an S-curve.

Further, as actual data comes in, you may be faced with how to revise an S-curve. If you update the data with actuals as they arise, you will need fewer periods for your S-curve analysis — but this will change its inherent characteristics.

Any variance analysis needs to take account of both the revised curve forecasts and the actual data. It may be simpler to fit data to the original curve instead using the remaining percentages scaled up to 100% instead — but this will be a personal choice.

Nothing is ever simple!