Last time out, this column considered modelling inventory, using a simple averaging method to value the stock sold. Unfortunately, real life usually makes this approach inappropriate. Often, we have to model inventory on a first-in, first-out (FIFO) basis, which is, well, trickier.

You can use your favourite search engine to find methods, which usually culminate in opaque user-defined functions, grid computations similar to depreciation calculations, or else brute force Visual Basic for Applications (VBA) scripts. Indeed, often you will find self-appointed sages decreeing that you have to resort to these methods because a formulaic method is “just not possible”.

Consider the following example. Imagine you decided to dabble in buying and selling shares: 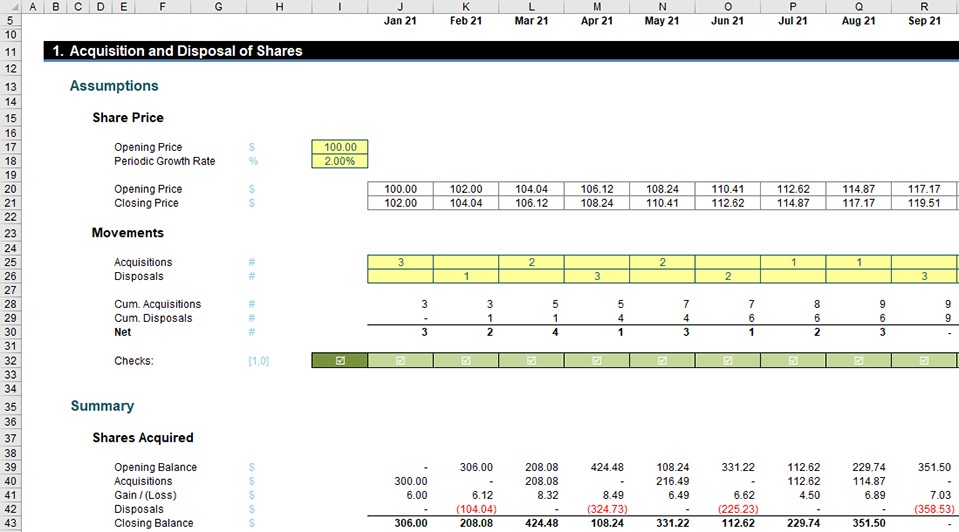 In the Excel file, I have assumed:

This sets the scene and is something that could easily be envisaged in the real world. Row 42 (Disposals) depicts the sales proceeds. However, what are the associated costs of goods sold? We could use the averaging method from last time, but in many tax regimes around this world, this option is not allowed.

Instead, many such regimes require a FIFO basis of attributing the costs to determine the taxable profit. If you think about it, that makes sense — provided you are the tax authority or a beneficiary thereof. If share prices are going up, this approach will maximise the net present value of your profits – ie, more tax to pay in real terms.

This provides not only a tax planning headache but also a computational one. You want to find a way to calculate this fee for your FIFO fumbles.

This is the problem:

Once you get your head around the concept, it makes perfect sense. The question is, how on Earth do you model it? And this is where our internet experts resort to user-defined functions, VBA, and witchcraft.

The computations may not be the most transparent I have ever written, but they can be calculated in just three lines, as shown in the screenshot below.

Let’s go through each of those last four formulas in turn. 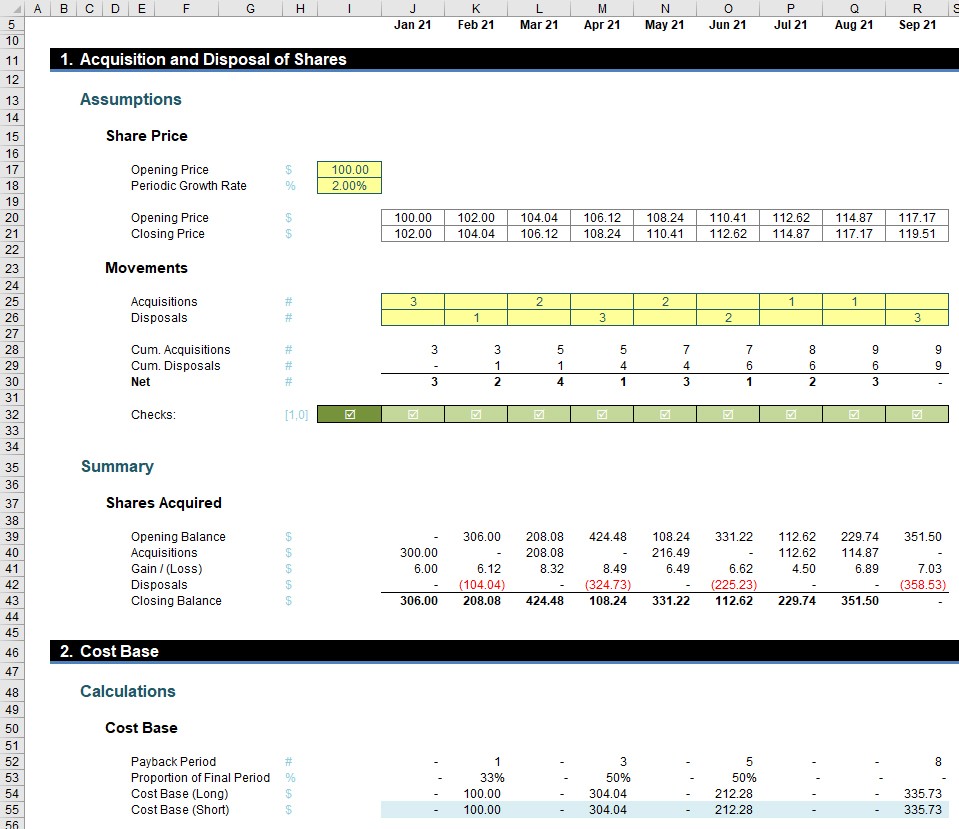 Row 52, Payback Period, has inquired about the final period required that acquired shares (sorry, I couldn’t resist that sentence). In English, this denotes the final period where shares were purchased, in order to service the share disposal figure for that period. To be clear:

To find the first period where the cumulative total of acquisitions (row 28) is equal to or exceeds the number of disposals required, we can use the formula:

in cell J52 and copy it across.

MATCH with type 0 for the third argument simply seeks out the first occasion of TRUE in the vector specified by the second argument (a vector is simply a row or column of cells). For example, the formula in cell O52 would be:

which would equate to:

The first TRUE occurs in position 5, hence O52 returns the value 5. However, the formula is more complex than this. That’s because life is never that simple.

For a start, the formula in cell J52 is:

This is the equivalent of:

The second argument is not a vector; it is merely one cell compared with another. MATCH doesn’t like this. Therefore, whether the result is TRUE or FALSE, this formula will always return #N/A — the formula is not applicable. We need to account for this:

The next problem is that if we have an instance where there is no payback (eg, assume the checks in row 32 are breached), the formula will again return #N/A — this time to indicate that the payback period is not available. This can be countered easily:

This will just replace #N/A with zero (0), as nothing is specified after the final comma. (IFNA simply checks whether a formula specified in the first argument returns #N/A and specifies what to do in this instance in the second argument.)

Finally, to ensure that the formula only calculates in periods where there are disposals, one further modification is made:

This just checks that J26 is non-zero. This provides us with a hideous nested IF formula, but one that does indeed specify the appropriate payback period:

This then raises the question, so why did we need this? It’s because the next step is to work out the total costs for all to disposals up to this point:

Consider the second and subsequent sales of shares:

Therefore, we have a plan of action. To work out the costs up to and including a particular sale:

This is why I have computed the breakeven period. Now, I need to work out the proportion used in this identified cut-off (payback) period. To do this, I need to use two of my most frequently used functions, namely MOD and OFFSET.

The MOD function, MOD(number, divisor), returns the remainder after the number (the first argument) is divided by the divisor (the second argument). The result will have the same sign as the divisor.

For example, MOD(47,7) equals 5, since 47 divided by seven (7) is 6 remainder 5. Remainders can vary from zero to any number strictly less than divisor. The trick I will employ uses MOD(calculation, 1), which will calculate any noninteger component of a calculation (ie, a value greater than or equal to zero [0] and strictly less than one [1] for a positive divisor). This forms the crux of calculating the payback period proportion.

Regular readers will recognise I use the OFFSET function all the time. The syntax for OFFSET is as follows:

The arguments in square brackets (height and width) may be omitted from the formula (they both have a default value of 1 which is explained further, below). In its most basic form:

In cell J53, consider the formula:

OFFSET($I$25,,J$52) is the total number of purchases (acquisitions) made in the identified payback period. Therefore, using the trick discussed above when introducing OFFSET,

Since we only want this formula to calculate when there has been a sale (disposal, as shown in row 26) and when a payback period (row 52) has been calculated, the formula is placed inside an IF statement:

This is the formula in row 53. Just take note of one important point here: If there is no remainder (ie, the value is zero [0]), this formula will result in zero (0). Strictly speaking, the proportion used in the payback period would be 100% though, not zero, so we will need to make an adjustment in this instance. I will revisit this scenario shortly.

To calculate the cost base used for all disposals, this will equal:

- The sum of all the acquisition costs for the period prior to the payback period (as explained earlier). This will be given by the formula

- This sum needs to be modified though if 100% of the costs are used in the payback period (ie, the next period needs to be included, too):

- For the breakeven period, we will need to calculate the proportion used, which is calculated in parts. Consider:

which is the unused proportion in the payback period. Adding these two parts together will give us what we need.

Still with me? No, I’m not either. However, if we combine these calculations, we obtain the total costs for all disposals so far:

Since we again only want this formula to calculate when there has been a sale (disposal, as shown in row 26) and when a payback period (row 52) has been calculated, the formula is once more placed inside an IF statement, as shown below.

This is the formula in cell J54:

Eagle-eyed readers will spot this is more complex than it needs to be, which is why this is called the “Long” formula. The expression

may be simplified to

which is quite a simplification! Therefore, using this substitute provides us with the “Short” formula in cell J55:

Clear as mud? Nonetheless, this provides us with the correct cost base for the period, without fancy footwork using user-defined functions, grid algebra, or VBA. From here, it is simple to work out the profit assessable to tax:

It’s not pretty, but it is FIFO.

Apologies, it’s not the simplest concept we have ever discussed, but this is a common problem in financial modelling. I wanted to show it for this reason — and because so many naysayers you cannot do this formulaically!

Some more advanced readers might consider using SUMPRODUCT and INDEX instead. This is because SUMPRODUCT cross-multiplies costs, and INDEX is not a so-called volatile function, which means it does not recalculate every time you press ENTER.

Given the name of my company is SUMPRODUCT, rest assured, dear reader, I have plenty of time for this function, but sometimes it slows down calculations, certainly compared to SUM. Similarly, OFFSET may be volatile, but it also often calculates more quickly than INDEX, especially given you would need multiple INDEX expressions. In larger models, you will find my formulas will calculate more quickly than using these alternatives — but it’s not wrong to use them instead.

It would be a boring world if we all thought the same.