As accountants, we often want to sum data for a period of time, eg, sales for the last quarter, year-to-date costs, and rolling budgets/forecasts. We generally create these calculations "statically"; ie, the range is specified explicitly.

Here, we have created a static formula for the year-to-date sales using the calculation

Next month, we would have to update this to

We can't simply sum the range in case other users populate row 4 with forecast estimates, etc. There is an alternative, and I thought I would go up to date and use Excel 365's XLOOKUP function.

As a reminder, XLOOKUP has the following syntax:

This function seeks out a lookup_value in the lookup_vector and returns the corresponding value in the results_array. It may seem complex, but most of the time you will require only the first three arguments:

For the record, the remaining arguments are:

What's impressive, though, is that for certain selections of the final argument (search_mode), you don't need to put your data in alphanumerical order. As far as I am aware, this is a first for Excel.

Let's have a look at XLOOKUP versus everyone's favourite function (except me), VLOOKUP: 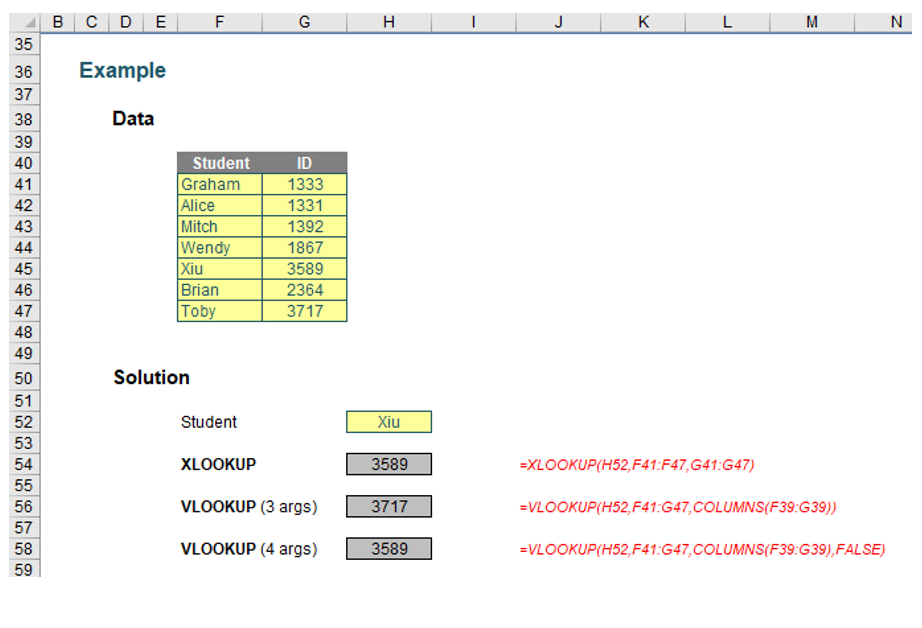 You can clearly see the XLOOKUP function is shorter:

Only the first three arguments are needed, whereas VLOOKUP requires both a fourth argument and, for full flexibility, the COLUMNS function as well. XLOOKUP will automatically update if rows/columns are inserted or deleted. It's just simpler.

We can use this to specify the start and end of our sum range as follows. Consider the following example:

The formula is "simply"

This is just two XLOOKUP functions joined together within a SUM function, specifying the start and end of the range. Indeed, if the First Date is after the Second Date, it will still work. The SUM function will work in "reverse order", too.

The dates may be varied, and the summation updates both automatically and correctly, as shown below.

For those who are getting upset at this point because they don't have access to Excel 365 and/or the XLOOKUP function, do not despair. The old faithful INDEX(MATCH) combo still works. It's just clunkier:

Lovely! Until next time …

— Liam Bastick, FCMA, CGMA, FCA, is director of SumProduct, a global consultancy specialising in Excel training. He is also an Excel MVP (as appointed by Microsoft) and author of Introduction to Financial Modelling. Send ideas for future Excel-related articles to him at liam.bastick@sumproduct.com. To comment on this article or to suggest an idea for another article, contact Jeff Drew at Jeff.Drew@aicpa-cima.com.