In Asia-Pacific, a retail banking evolution is underway. Experts say consumers in the region are some of the most willing globally to adopt digital channels and use digital-only financial service providers.

A recent Forrester survey of 14,900 adults in eight markets — Australia, metropolitan China, Hong Kong, metropolitan India, Indonesia, Malaysia, Singapore, and Thailand — illustrates this eagerness. The research firm found that 73% of consumers across the Asia-Pacific region believe they “should be able to accomplish any financial task on a mobile device”.

A sizeable majority of bank customers, ranging from 69% in Indonesia to 79% in Thailand (see the chart “Whither Bank Branches?” below), say they prefer using digital channels, such as websites and mobile apps, over a visit to a bank branch or other channels to meet their banking needs. Mobile banking is the most preferred method in five of the eight markets, while banking on a desktop or laptop is marginally more important for those in Australia, Hong Kong, and Malaysia.

“Empowered customers will drive the adoption of digital banking and consider the switch to digital-only banks,” said Zhi-Ying Barry, senior analyst at Forrester, in an email to FM magazine. “Specifically, customers in metropolitan India and mainland China, who are more willing to experiment with new experiences and technologies and have higher expectations from firms.” 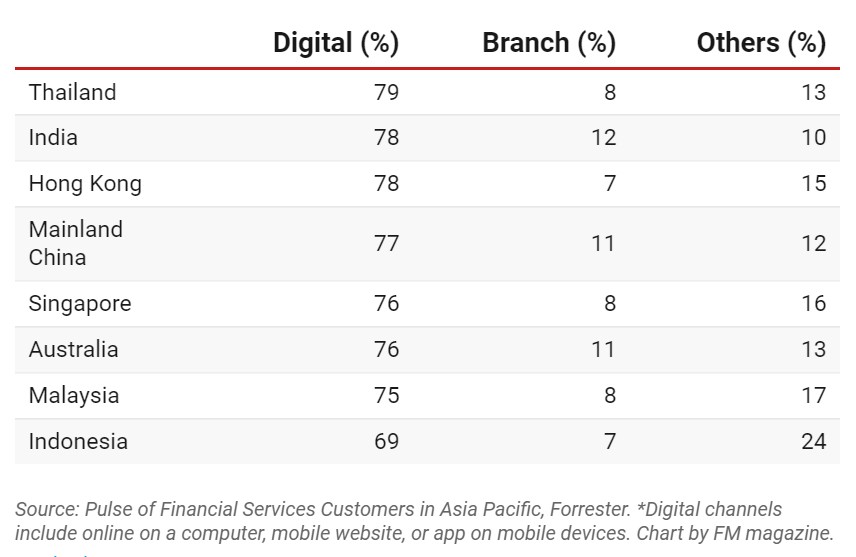 Digital-only banks will gain ground in next two years

New banks are also gaining ground in Asia-Pacific markets, but you will not see their bank branches on the street. These are digital-only banks or virtual banks that exist solely online. While traditional banks rely on bank branches to verify identities, set up new accounts, and collect deposits, digital-only banks do the same through personalised mobile apps and bots to answer customer queries. Examples in the region include China’s WeBank and South Korea’s Kakao Bank.

Forrester’s survey found that the digital-only concept is most popular in India, where 59% of those surveyed said they would consider switching to digital-only banks in the next two years. The next highest percentages were found in Indonesia (48%) and Thailand (44%). In Australia, the figure is the lowest, at 14%.

Regulators in Hong Kong, Singapore, and Australia have begun releasing licences to digital banks and, as other markets follow suit, the Asia-Pacific retail banking environment “is on the cusp of major new digital banking breakthroughs”, the report noted.

Still, what would motivate consumers to switch from their current banks to digital-only banks?

“Consumers are more likely to engage with firms that prioritise helping them improve their financial wellbeing,” said Dane Anderson, vice-president, research director and region manager at Forrester, in a press release. “We expect that customers will dynamically deconstruct their personal financial services ecosystems and reassemble them with newer and better players.”

In the survey, most consumers ranked banks as the most trusted entities to act in their financial interests, with the exception of India, where Google beat banks. (See the chart “In India, Google Beat Banks” below.)

“Incumbent banks have been around for decades and have built that trust over time with branch networks, call centres, advisers, and digital channels all at the same time while providing deposit guarantee up to certain amounts,” she added.

Consumers rank organisations they trust to "act in the best interest of their financial well being". 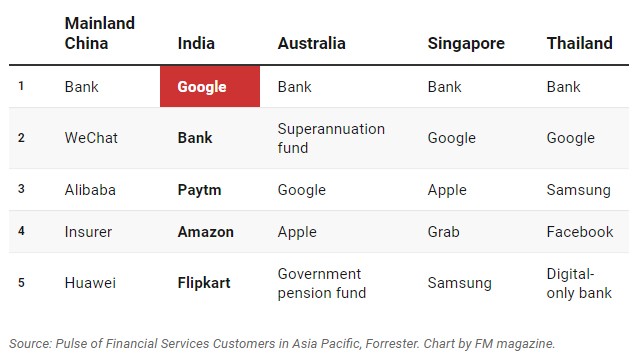 Ahamed noted that the current retail banking landscape will not become purely digital in the midterm. “It’s going to be a mix of both,” he said.

Read more from Ahamed in the FM magazine Q&A “How Fintech Changes a Management Accountant’s Job”.

— Alexis See Tho (Alexis.SeeTho@aicpa-cima.com) is an FM magazine associate editor.