The best athletes in the world won’t be the only ones competing at the 2018 Winter Olympics in Pyeongchang, South Korea. A host of big-name companies will also be striving just as strenuously to win. But their goal isn’t to capture a gold medal — it’s to win your attention.

As the traditional media advertising landscape has fragmented due to digital technology, it has become increasingly difficult for companies to break through to broad audiences. One of the remaining avenues for companies to reach larger audiences is sponsorship of high-visibility, global sporting events like the Olympics. Along with other major sporting events like the Super Bowl and the World Cup, the Olympics offer advertisers massive audiences deeply invested in the event — a rare and valuable commodity for marketing departments.

For example, the 2016 Summer Olympics in Rio de Janeiro garnered a broadcast television audience of more than 3.5 billion viewers, or about half the world’s population, with billions more views on digital platforms, according to the International Olympic Committee.

“Here is a platform where two-thirds of the world’s population will pay attention at some point,” said Norman O’Reilly, CPA, Fox Professor of Business at the Ohio University College of Business and a co-author of Global Sport Marketing: Sponsorship, Ambush Marketing, and the Olympic Games. That massive audience engagement makes “the Olympics the most successful sponsorship programme in history, regardless of platform, regardless of domain”, according to O’Reilly.

But that broad audience comes at a steep price. Companies spend hundreds of millions of dollars acquiring and activating sponsorship rights to a global event like the Olympics, and sponsorship opportunities at the very top level are limited.

While few companies have the scale and resources to mount a global branding campaign worth hundreds of millions of dollars, there are many Olympic sponsorship opportunities at the regional, national, and local level — everything from sponsoring a national team to sponsoring an individual athlete.

“Sponsorship has been growing at an incredible rate because it works,” said O’Reilly, but he added that it takes a clear strategic focus to be successful.

No matter what level of sponsorship a company chooses, sponsorship is a “different animal” than traditional advertising and requires a distinct set of standards, according to William Chipps, senior content editor of the ESP Sponsorship Report and spokesperson for sponsorship agency ESP Properties.

“The beauty of sponsorship is you’re tapping into the emotion that people have for a particular interest, whether it’s sports or music or a cause,” said Chipps.

But how can companies get the most return on investment (ROI) for their money? We spoke to several sponsorship experts for best practice guidelines, and here’s what they recommended:

Set clear objectives: Sponsorship is an opportunity to emphasise branding, create emotional links, and impart consumer experience as well as drive direct product sales, according to Charles R. Taylor, the John A. Murphy professor of marketing at Villanova University. But that wide range of possibility also poses a hazard: It can be tempting to overreach and lose sight of strategic objectives.

Michael Payne, former marketing and broadcast rights director for the International Olympic Committee and creator of the IOC’s TOP sponsorship programme, urges companies to be disciplined and focused in developing objectives, whether it’s sales, branding, hospitality, or client development.

“You’re effectively reaching everybody, but you have to decide within the company what your strategy is,” said Payne, now CEO of the Monaco-based Payne Sports Media Strategies. “You need to be ruthless: Yes, it may be fun and great imagery, but is it going to respond to my business strategy?”

Identify target demographics: The Olympics’ vast audience holds value for global brands like Coca-Cola, Visa, or Procter & Gamble, but the demographic range for most companies is much smaller. Many large-scale events, like the Olympics, offer marketers many different audiences within the scope of the platform, and to maximise the benefit of a sponsorship, companies need a clear idea of their audience and where they are before investing significant resources.

“Every event draws a certain type of demographic,” said Chipps. “Understanding who you want to reach is key in deciding where to invest.”

It’s a complicated process. Sponsorship has a different set of analysis metrics than traditional advertising, according to O’Reilly. He has researched 190 ways that companies measure marketing success — such as following social media conversations around brands — but it isn’t always a lack of tools or analytics that lead to poor measurement.

“The number one reason why organisations don’t evaluate their sponsorships is not a lack of tools or models but a fear of a negative evaluation,” said O’Reilly.

Plan to do (and spend) more: Sponsorship is often the first step of a sophisticated marketing campaign, and companies need to be active on several fronts to be effective. Companies set themselves up for failure if their advertising, social media, and hospitality efforts don’t get consumers to act on the emotional connections they’ve created by sponsoring the event.

“Buying a sponsorship without activating it is like buying a toy without buying batteries,” said Chipps.

At this level of investment, companies need to utilise and maximise the relationship with the event by piggybacking additional marketing and advertising campaigns. Companies can expect to spend anywhere from one to three times the cost of the sponsorship on additional campaigns, O’Reilly said. Sponsorship is not only tied to a single event but should be part of a larger marketing investment strategy.

“You have to integrate it into your mainstream marketing,” said Payne. “If you properly integrate it, the results are a completely different dimension.” For example, Coca-Cola created a #thatsgold campaign featuring gold-medal-winning moments during the 2016 Rio Olympics as part of their overall brand campaign, “Taste the Feeling”, that tied drinking Coca-Cola to pleasurable moments.

Emotionally link the event to a brand: Companies need to focus on capitalising on a sponsorship’s visibility by tying the positive association audiences have to the brand.

“The campaign you’re running in conjunction with the sponsorship should be memorable, but there should be a good link to the event,” said Taylor.

Digital technology, social media, and market fragmentation require companies to create deeper, more emotional connections with audiences, and, done correctly, sponsorship does exactly that in the minds of fans, according to Chipps.

“The thinking is, with a company sponsoring one of their events, that they are supporting the passion that people have for that event,” said Chipps.

Procter & Gamble’s “Thank You, Mom” advertising campaign, in which Olympic athletes thanked their mothers for supporting their dreams, paired with an Olympics sponsorship, is often cited as an excellent example of creating a bond between a brand and an event because all audiences, across the globe, understand and empathise with the sacrifices that mothers make in service of their children. 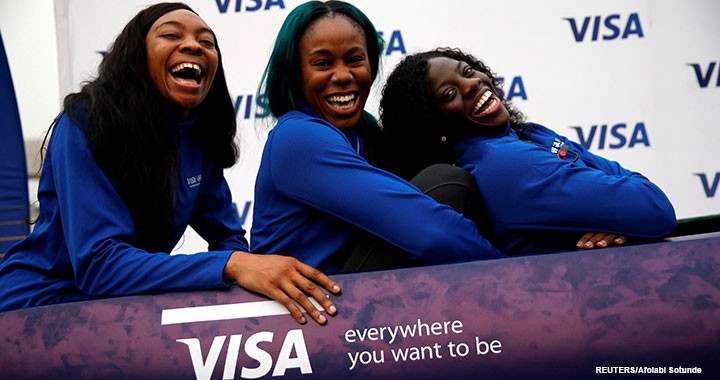 Nigerian Women's Bobsled Team Ngozi Onwumere, Akuoma Omeoga and Seun Adigun smile in a bobsled upon their arrival in Lagos, Nigeria, as part of preparations ahead of the 2018 Pyeongchang Winter Olympic Games, 1 February 2018.

Spending big money on a sponsorship? Beware the danger of ambush marketing

Competitors can undermine the value of a sponsorship with counter-campaigns.

The Olympics and other high-profile sporting events like the World Cup and the Super Bowl offer a rapt global audience that costs companies hundreds of millions of dollars to access. Official sponsorship should provide exclusive entrée to that audience for a company, but occasionally competitors find canny ways to attach their brand to the event without paying for it, a practice called ambush marketing.

“Ambush marketing is when a competitor of one of the official sponsors tries to link themselves to the event, often through a stunt,” said Charles R. Taylor, the John A. Murphy professor of marketing at Villanova University.

The value and strategic goals of an Olympic sponsorship are undermined when a competitor siphons off brand and emotional connection to the event, according to Norman O’Reilly, CPA, Fox Professor of Business at the Ohio University College of Business and a co-author of Global Sport Marketing: Sponsorship, Ambush Marketing, and the Olympic Games.

“It’s very real, the risk is very high, and the onus is on the property to protect their sponsor,” said O’Reilly.

Nike’s 2012 “Find Your Greatness” campaign is a classic example of ambush marketing. Although it was not an official sponsor of the 2012 Summer Olympics in London — that was Adidas — Nike ran a marketing campaign coinciding with the Olympics highlighting successful athletes from various Londons around the world: Ohio, South Africa, and Jamaica.

Ambush marketing doesn’t have to be as high-profile as a multimillion-dollar advertising campaign. It can also be more subtle. In 2010, 36 women showed up at a World Cup match wearing identical orange dresses associated with Bavaria Beer, a direct competitor to official sponsors Carlsberg and Budweiser. The women were ejected from the stadium and several were arrested for the stunt, but not before their images were streamed to millions of viewers, ultimately linking Bavaria and the World Cup.

There’s not much a company can do to protect itself against an ambush, but rights-holders like the Olympics work hard to protect official sponsors from ambush marketing by aggressively enforcing bans on associated words like “rings”, “games”, “medal”, “gold”, etc. Host countries are required to pass legislation protecting Olympic copyrights and sponsors’ exclusive use of the games. But that doesn’t mean that companies won’t keep trying to attach themselves without an official sponsorship.

“Marketers and ad agencies are very creative, and I think we’re going to continue to see them find ways to link themselves to the event that don’t run afoul of the rules, but I don’t think it is as huge a risk as it once was,” said Taylor.

— Drew Adamek is a freelance writer based in Durham, North Carolina. To comment on this article or to suggest an idea for another article, contact Chris Baysden, senior manager, newsletters, at Chris.Baysden@aicpa-cima.com.