US companies are performing well. Revenue outlook is the highest it has been in more than two years. Ditto for profit. Which helps explain why more companies are planning to expand than at any time since late 2014, new data indicate.

Add to that mix a domestic political landscape that could lead to lower corporate taxes and less regulation, and it may come as no surprise that US economic optimism amongst CPA decision-makers in business and industry climbed to its highest level in more than a decade.

That’s according to the latest Business and Industry Economic Outlook Survey released Thursday by the American Institute of CPAs.

Sixty-nine per cent of finance executives are optimistic about the US economy for the next 12 months, the highest number since 2004, the survey’s first year. That sentiment is starkly different than a year ago, when 28% expressed optimism and the CPA Outlook Index, a nine-sector measure of economic sentiment, dipped to the lowest level in more than three years.

Optimists in 2017 pin hopes on a strong showing by the stock market since the election of US President Donald Trump and accompanying expectations of a lower corporate tax rate and reduced regulation. Since November 9th, the day after the election, the S&P 500 is up 11%.

In the survey, 81% expect a substantial reduction in federal corporate income tax, even though half don’t expect tax changes until 2018. And regulatory requirements and changes, regularly listed as the top challenge by CPA decision-makers, dropped a spot on that list, behind employee and benefits costs.

With the optimism comes some concern about cost.

Staffing, for instance, is projected to rise for a fourth consecutive quarter. But CPA decision-makers appear worried about the rising cost of employment. Good employees are harder to find; therefore, companies must compete on salary and benefits for those workers. Also, higher inflation is predicted, which could force organisations to increase wages to retain existing employees.

The staff of Life Link III, a provider of emergency air medical transportation, has grown almost 20% to 111 as the not-for-profit opens a new base of operations in the town of Brainerd, Minnesota. CFO Bob Sannerud, CPA, CGMA, said Life Link III has grown its helicopter fleet from seven to nine and sees reason for optimism in the future.

He expects the organisation to add a few administrative jobs in the coming year. But, he added, “It’s tough to find good people.”

For that reason, Life Link III is constantly recruiting, Sannerud said. For clinical jobs, it sometimes advises promising but underqualified candidates of the specific skills or credentials needed to be hired in the future. Sannerud said that a lengthy search for job openings can delay expansion plans. “If you don’t have the right people, you can’t move forward,” he said.

Kim Hay, CPA, CGMA, the director of finance at the Louisville Convention and Visitors Bureau, said business in the Kentucky city is strong. The Kentucky International Convention Center, located in downtown Louisville, is in the middle of a $200 million renovation and expansion, which is limiting the number of events in the current year. But bookings for future events are on the rise, Hay said. And the organisation is planning for strong growth in 2018.

In the meantime, Hay is focused on cross-training finance staff to provide them exposure to duties that might be outside their traditional role – an approach that is in line with the economic outlook survey, which shows that investment in training has risen or remained the same four consecutive quarters.

Inflation is another area for concern. One-third of respondents are more concerned about inflation than deflation; a year ago, just 14% listed inflation as a concern. Forty per cent said that the most significant business risk related to inflation was labour costs, 24% listed raw material costs, and 21% picked interest rates.

Interest rates could soon be going up, gradually, through the year.

Janet Yellen, chair of the US Federal Reserve, said Friday that the Federal Open Market Committee could adjust the federal funds rate as soon as its meeting later this month.

“The committee will evaluate whether employment and inflation are continuing to evolve in line with our expectations, in which case a further adjustment of the federal funds rate would likely be appropriate,” she said in a speech in Chicago. 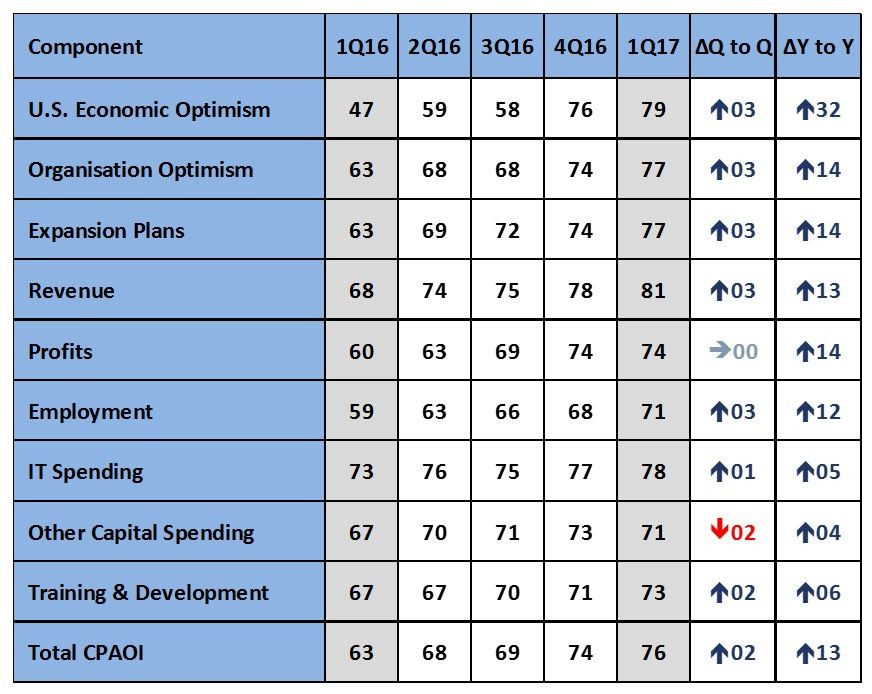 With the exception of the first quarter of 2016, regulatory requirements and changes were the top challenge listed by CPA decision-makers in each quarter since 2013. Now, labour concerns have helped to change the order of challenges this quarter. Here are the top ten challenges, followed by rank on the list from the first quarter of previous years (NA=not ranked in top ten): 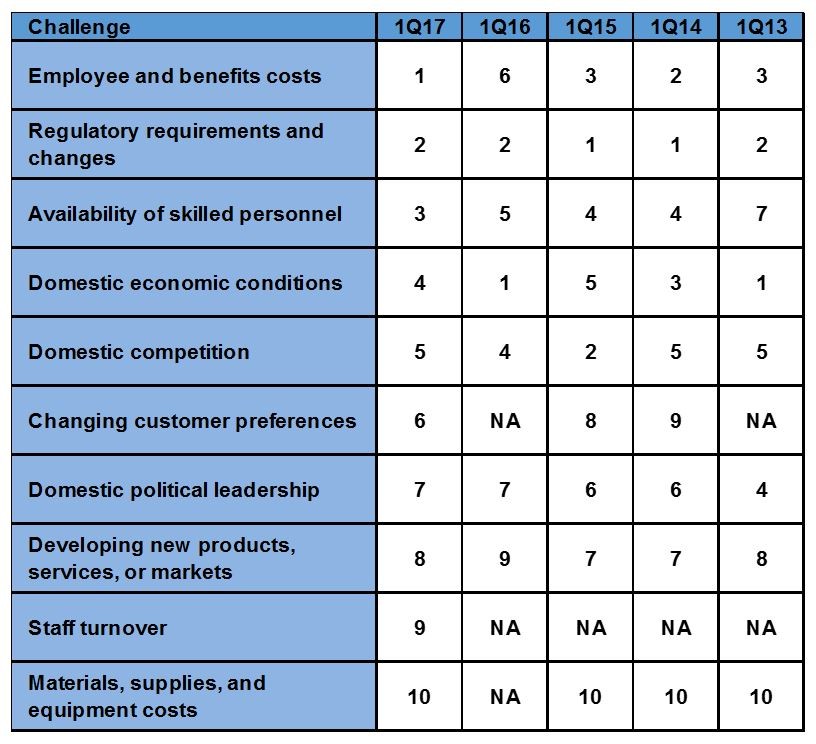