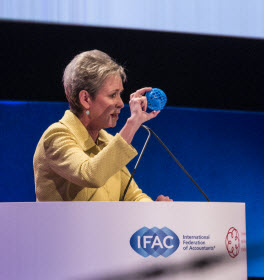 Olivia Kirtley, CPA, CGMA, held a small blue globe in her hand for the audience to see as she presided over the closing ceremony of the World Congress of Accountants on Thursday.

The globe, manufactured by CGMA staff using a 3D printer at the Rome meeting, was more than an emblem of the international gathering of nearly 4,000 accountants. Its high-tech DNA spoke to the evolving role of finance professionals – often a swirl of technology, data, strategy, and innovation mixed with the more traditional finance responsibilities.

In closing remarks, Kirtley, the new president of the International Federation of Accountants (IFAC), highlighted her key takeaways from a session organised by CGMA at the Rome meeting: That finance – once the passenger or navigator – is increasingly taking the driver’s seat at businesses around the globe.

Among the other themes from the session bubbling up to the World Congress closing ceremony:

The World Congress featured roughly three dozen sessions and more than 200 speakers, including executives from British Telecom, EY, Royal Dutch Shell, and Yahoo, as well we regulators, standard-setters, and others.

Sessions focused on the role of the audit committee, the status of international accounting standards, the need for transparency in government accounting, and integrated reporting.

“The groundswell for integrated reporting and integrated thinking is rising quickly,” Kirtley said at the closing ceremony. She said expectations of businesses have changed and organisations need to rethink their approaches to reporting. Kirtley also called enhancing government transparency a major issue facing the profession.

Kirtley, a member of the AICPA’s governing council and former chair of the AICPA board of directors, will lead IFAC as president for the next two years. She becomes the first female president of IFAC, as well as the first from business and industry rather than public accounting.

Kirtley serves on boards of directors of three companies: US Bancorp, Papa John’s International, and ResCare. Previously, she was vice president of finance and CFO of Vermont American Corp. She was named by the National Association of Corporate Directors as one of the top corporate directors and governance professionals in the United States.

In her acceptance speech on November 7th, she highlighted two areas of emphasis for her term. The first is IFAC’s outward focus. “I want to increase engagement and strengthen our external relationships – with lawmakers, regulators, governments, investors, and the media – reaching out and building these relationships, to increase mutual understanding and trust, especially in the areas of standard-setting, audit quality, and financial reporting,” she told the IFAC Council. “These are not just accounting profession issues; they are public interest issues.”

Her second area of focus is pursuing “continuous improvement in impact and value on behalf of IFAC members –in member relations, in allocation of resources, and in what we deliver.” This will include a continued emphasis on leveraging technology and strategic partnerships and seeking ways to enhance operations, communications, support structures, governance, and output.