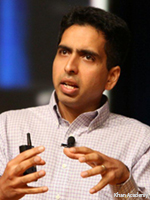 Sal Khan’s story has many of the markings of a classic Silicon Valley narrative.

Khan, an investment analyst working in Boston at a hedge fund, in 2004 began using Yahoo Doodle and phone calls to tutor a faraway cousin struggling with math. That evolved into posting simple video lessons on YouTube. The videos and the free, online approach to learning caught fire, and soon Khan Academy was born. The not-for-profit attracted financial support from Google and Bill Gates, amongst others.

The organisation’s website now draws 9 million unique users from 216 countries each month. It aims to provide free education to anyone via exercises, videos, dashboard analytics and teacher tools.

Khan spoke Monday at the American Institute of CPAs governing Council meeting in Los Angeles about the importance of getting people to rethink education, including the way learning happens in their own organisations.

What follows are excerpts from a conversation with Khan, which took place before his talk. He discusses innovation, the importance of feeding your passion, battling for superstar talent and what mentoring looks like at a learning organisation.

Battling giants and generational issues in the talent arena

Khan: It’s unconventional for a nonprofit, but we pay very well. We pay upper-quartile Silicon Valley – which is a lot.

But in order to really attract and retain folks, I think kind of our secret sauce is that we really invest in people’s skillsets. We mentor them. And we should because we are a learning organisation. It would be very hypocritical if we’re out there trying to make tools and resources for the rest of the world to learn, but we weren’t doing that with our own people.

And so whenever a young person comes, and we’ve given them an offer and they are superstars and I’m trying to convince them to join and they have offers from Facebook and Google and Goldman Sachs and McKinsey and everywhere you can imagine, I point out our team. I point out who we have on our team. I point out the size of the team. [Khan Academy had 48 employees as of October 1st and generally employs ten to 30 temporary employees or contractors at any time.]

And I say, “Look … we are about investing in you. We need you to move up the learning curve as quickly as possible, and so we’re going to have a lot of people invested in your advancing.” And I think that’s what most people want.

And then, on top of that, if you can give them ownership, where they really feel like they are going to matter. Whether or not they show up at work will have an impact on the organisation. I think [that] matters to a lot of people, not just Millennials, frankly. It matters to me. I’m late Gen X. It matters to Boomers.

If you have ownership and you feel like people are really invested in pushing you forward, and you get enough money that you don’t feel like you took a vow of poverty, I think you’ll do OK.

Khan: There has to be a reasonably short distance between the time that someone thinks of something that might be innovative and their ability or the ability to make it a reality.

All too often, the distance is so long and there’s so many – I guess, for lack of a better word – negative forces that say all the reasons why this isn’t a good idea, that it doesn’t even get a chance to be tested.

I think it’s real important to have … a framework for testing even sometimes crazy ideas. You can debate something until the cows come home, and 90% of the room might think it’s a bad idea, but you never really know until you try it out.

So I think it has to be an environment where people feel ownership, and they can experiment and they can actually put things out there but in a responsible way, obviously, in a way that doesn’t hurt the underlying business, the core of the organisation, and it’s done in the proper spirit.

I think the other [important] elements are just rewarding that, rewarding people who are failing – not failing in the traditional sense – but who have taken risks and who have failed in a responsible way.

I try to push the team here. “Last quarter we did all these great things. Where did we mess up? Where did we fail?” If we can’t list those, then we’re not pushing things fast enough.

Taking organisational training out of the classroom

Khan: When I think of organisational training, I don’t imagine a classroom. That’s not what we do at Khan Academy. And everything I write about in my book [The One World Schoolhouse: Education Reimagined] is that the real learning happens by doing, by observing, by experiencing.

So when I talk about mentoring and investing, it’s really something that happens at a management level. It’s how a manager interfaces with the people they manage.

If a manager shows real investment, real listening, and then does real mentoring, then people notice it. To us that is regular one-on-ones.

When I was younger, I’d be in [an organisation], and I’d wonder what would happen at this meeting or that meeting. And it’s not like anything was confidential. They could have easily had me at the meeting. It’s just they never thought to do it. And I got frustrated. I felt like I was being held in this one little corner of the organisation.

Once again it’s about giving ownership, being transparent, understanding how decisions are being made  and having respect for junior folks. They want to know these things. They are capable of understanding these things. And there should be outlets also for them to give feedback on these things. Obviously, you don’t have to take all of it. But sometimes you’ll hear something that will make you realise maybe a slight course correction would make sense.

There’s a very introverted side of me that wants to just make videos all day or write math questions all day. I definitely feed that side of me. I try to [focus on that content side] for three, four, five hours a day. My mood is proportional to how much of my day I get to do that.

But there’s obviously a whole organisation here. I have to manage that. … I have external things that need to be done. I go give talks. We’re a not-for-profit. I need to raise money, build awareness.

If you step away from me, as an organisation, it’s a similar problem. How do we triage and make sure that we’re focused on the absolutely most important thing?

Because kind of one of the exciting but at the same time worrying things about where we are right now is that there is so much do, so many opportunities. All of them could be huge. But, if you try to do all of them, you probably won’t succeed at any of them.