While the frozen waters of the Arctic and the sun-baked Suez Canal sit half a world apart, an expanded trade route through the Arctic created by a major icebreaking effort could have a huge impact on the Suez Canal — and on supply chains worldwide as a result.

Russia's stated intention to increase traffic along the 5,500-kilometre (3,400-mile) Northern Sea Route (NSR) was announced in an expansive plan on 30 December 2019. If realised, the plan would open up a sea route that remains impassable for much of the year because of heavy ice blockage. It directly reflects Russian President Vladimir Putin's target of annual cargo volumes passing through the Arctic reaching 80 million tons by 2024, a sharp increase over present levels, according to The Maritime Executive magazine. Citing figures from the Northern Sea Route Administration, the magazine stated that 31.5 million tons of goods were shipped via the passage in 2019.

Finance professionals at global business suppliers and other companies should prepare for unprecedented opportunities. "Fully opening the NSR may play a significant role in reshaping the world trade map, as well as affect the economics of many countries," said Sameh A. Rassoul, CPA, CGMA, chief internal auditor at National Navigation Company, a major Middle East ship owner headquartered in Cairo.

"I think there's a chance for this route to be an important trade artery that links Asia and Europe, especially if it proves its feasibility in saving time and cost compared to the other paths," Rassoul said. That would mean strong potential for better logistics performance, an opportunity that businesses will want to seize on if the route reaches the full potential Russia envisions.

Citing research by the Netherlands' Bureau for Economic Policy Analysis, Rassoul said that two-thirds of the world trade that passes through the Suez Canal, which is 8% of the global trade, will be rerouted to the NSR.

The economic potential of the route was realised as early as the 16th century, and, even then, a Russian was involved. The Venetian explorer Sebastian Cabot, along with a Moscow diplomat, proposed to use it as a passage to China. The British and Dutch looked into the route at roughly the same time, sensing its potential advantages in trade, but severe conditions and lack of technology intervened. Much later, the Soviet Union used it for moving goods in the 1930s, and in World War II, hundreds of vessels transported 4 million tons of cargo via the route.

Today, bypassing the Suez Canal reduces shipping distances from East Asia to western markets by close to 40%, from roughly 23,000 to 14,000 kilometres (14,300 to 8,700 miles). "It would thus decrease shipping lead times by 10 to 32%," said Andrey Vinogradov, associate professor and deputy head of the operations management and logistics department at Moscow's National Research University Higher School of Economics' Graduate School of Business. 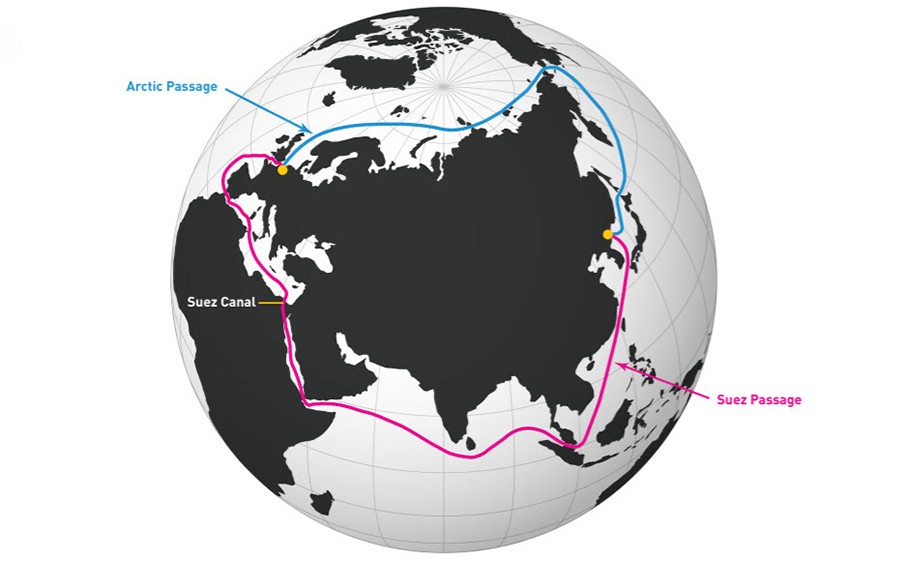 Finance leaders who oversee supply chains should get to know the NSR and "get ready for some key investment opportunities in many categories", Rassoul said. "The readiness of this route for navigation means a lot of subsidy projects will rise up, [along with] some significant labour displacement between sectors." For example, any trade that links northeast Asia and northwestern Europe "is expected to see substantial reduction in transportation costs, which affects freight rates and definitely supply chains".

Yet this far-north commercial passage involves significant logistical challenges. The route is free of ice only two months a year. "It's still the frozen Arctic," said Tony Munoz, The Maritime Executive's president and editor in chief. "Weather conditions are extreme, and vessels require a costly icebreaker escort for the majority of the year."

Therein lies a problem. Russia's Arctic-ready icebreaking fleet consists of only four vessels, Vinogradov said. To reach Putin's tonnage goal, he said, "the fleet should be expanded up to 35 to 55 vessels, according to different industry experts". At least 40 new vessels are included in Russia's plans, according to The Maritime Executive, and the need for many more icebreakers itself "creates new opportunities for international producers and their suppliers".

Icebreakers clear paths by pushing straight into frozen-over water, their bows rounded to help the vessel ride over ice and break it using its weight. The ships are expensive — on the high end their price tag can surpass $1 billion each — in large part because they are massive and specialised. The US Coast Guard's Polar Star, for example, is 122 metres (400 feet) long, can sail for 16,000 nautical miles at 18 knots, and carries two helicopters. It even has its own post office.

Vinogradov said that because of the ice, the current path ships can use through the NSR is only 40—75 metres (44—82 yards) wide, which limits cargo capacities to approximately 5,000 20-foot containers. This restriction on cargo sizes "diminishes the economy of scale and leads to an increase in cost per container by 25%", he said.

However, climate change could work in the route's favour. The New York Times reported in 2017 that a Russian tanker had traversed the NSR without icebreakers, while the Bureau for Economic Policy Analysis in the Netherlands has projected that the passage could be ice-free by 2030. Yet, where some see opportunity, others point to a negative environmental impact. Carriers MSC, CMA CGM, Maersk, and Hapag-Lloyd have said they will not use the NSR, arguing that it's not worth the risk of damaging vulnerable Arctic ecosystems.

Expanded use of the NSR could eventually be a boon for Russian suppliers. "Russian energy and natural resource projects that rely heavily on this route may be of some interest to investors," Munoz said. But with a melted passage and new icebreakers still some way off, he contended that European and Asian supply chains will feel little to no impact in terms of reduced traffic: "Until global warming frees up the route, it will probably be a niche option."

Meanwhile, it is important for supply chain-conscious companies to compare shipping costs if they have the option of choosing a route. "To estimate the economic effect of using the NSR, finance professionals should take into consideration the fee of icebreaking services," said Anastasia Ivanova, an associate professor in Vinogradov's department. Those icebreaking fees vary from $15 to $18.40 per ton of the nominal deadweight of an icebreaker, depending on the season. "These numbers should be compared to the Suez Canal [passage price] fees of $8 to $12 per ton of the nominal vessel's deadweight."

Hurdles still exist in terms of capacity, cost, and clearing a path through the frozen expanse. But if Russia has its way, all of these will be overcome in time — thanks to a nearly $12 billion investment — and "the NSR could create great [openings] for international trade", Ivanova said. 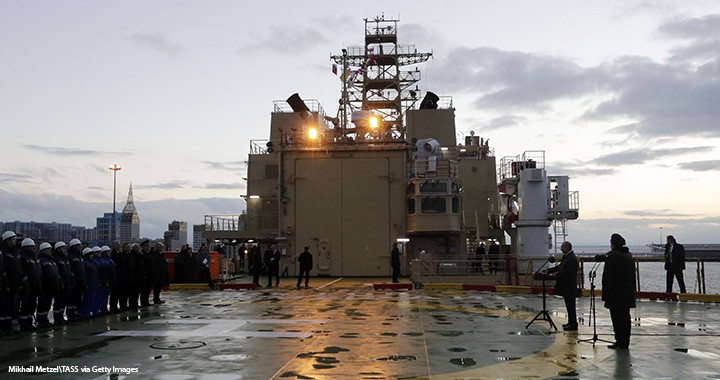 A flag-raising ceremony takes place in St. Petersburg, Russia, in November aboard a new icebreaker intended for use in the Northern Sea Route.

Lou Carlozo is a freelance journalist based in the US. To comment on this article or to suggest an idea for another article, contact Chris Baysden, an FM magazine associate director, at Chris.Baysden@aicpa-cima.com.