The energy company Equinor (formerly Statoil) is Scandinavia's largest company, with operations in more than 30 countries and a yearly turnover of $64.4 billion. In 2005, we made radical changes to our management processes, with two purposes: to make them more aligned with our people-focused and values-based beliefs and to make them more adaptive and robust against a dynamic and unpredictable business environment.

Both these purposes required major changes in both the traditional budget process and the mindset behind it. We actually ended up kicking out the traditional budget in favour of a new set of much more effective processes, including one for cost management. We found inspiration in the management model "Beyond Budgeting", which is described more in depth later.

"Kicking out the budget" might seem scarier than it really is. It starts with "debundling" or separating the three budget purposes, which are target setting, forecasting, and resource allocation. A traditional budget is used to set financial targets, but it is also meant to describe what we believe next year will look like (a forecast). Finally, we use the budget to hand out bags of money to the organisation (resource allocation).

Three purposes in one process and one set of numbers might seem very efficient, but here lies also the problem. An ambitious sales target will seldom represent a good sales forecast. You can't mix aspirations and expectations. Cost and investment numbers sent upstairs might also be affected by everybody remembering that last year's proposals were cut by 30%.

Fortunately, there is a simple solution. As mentioned, we need to solve the three purposes in separate processes. (See the graphic, "Solving the Budget Conflict".) 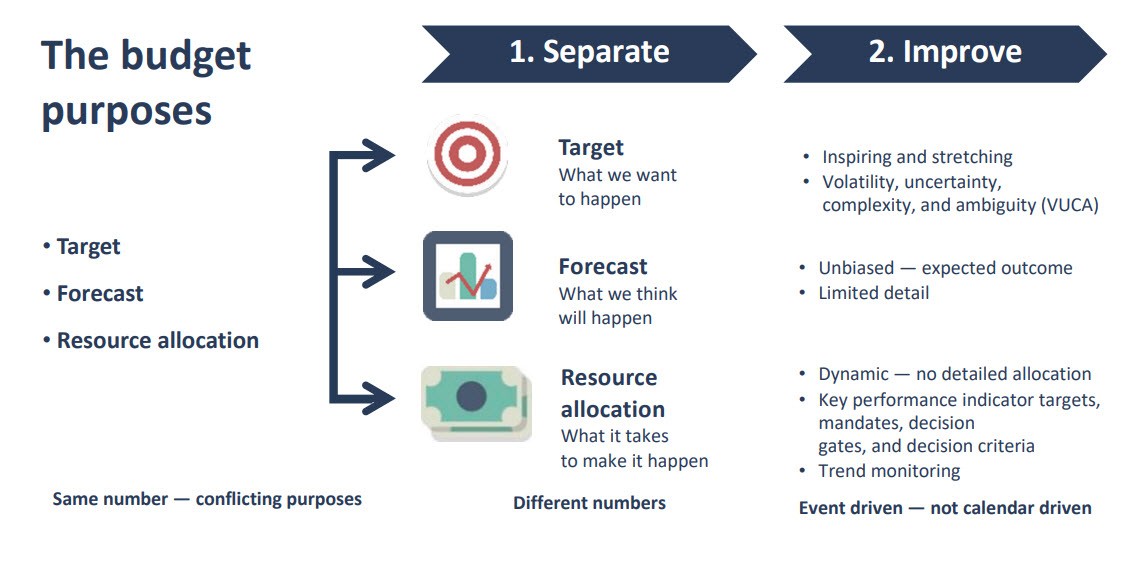 This enables significant improvements for each budget purpose, as they are now handled in separate processes.

This article is about the third process, resource allocation, and how to manage cost without a budget. Here is what we do at Equinor. Please note that this is our way, not the way. Others have found other ways, some much simpler than what we do. I point to two examples later in this article.

Equinor is in a capital-intensive energy business, so let's start with how we handle investments. We invest between $10 billion and $20 billion annually. Despite the big money involved, it is not that difficult for the company not to have an annual investment budget. Although we lately have had some self-imposed constraints on our overall investment level, there is no annual, detailed investment budget with all decisions made in the autumn.

Instead, "the bank is always open". What this means is, the business can forward projects for approval at any time. How high up one needs to go is regulated by a mandate structure, which needs to be generous enough to avoid too many decisions ending up in the Executive Committee.

"Yes" or "no" to a project depends on two things:

The second question is answered by checking our latest forecast information. Many companies use rolling forecasts to obtain this information. The forecasts are typically updated every quarter and usually have a five-quarter time horizon. At Equinor we instead apply a dynamic forecasting approach. (Read more about the difference in my earlier FM article, "Want Business Agility? Throw Out the Calendar!")

We use dynamic forecasting, as opposed to rolling forecasting because we have no predefined frequency. This is to ensure that we have the capacity — which also is a dynamic picture — and to confirm that new commitments are within our constraints.

Managing operating costs without a budget is more challenging, as there are fewer big and distinct decision points. Here we need other mechanisms. (See the chart, "Operating Costs: Tools Available".)

What we no longer do is the detailed, annual budgeting, as depicted on the left in the chart. It is too detailed, too early, and often "too high up" decision-making.

Instead, we offer a menu of alternative mechanisms to help the business manage its own costs. These include:

The further to the right we move on this menu (in the "Operating Costs: Tools Available" chart), the more trust is shown. There is, however, one thing that is bound to happen when trust is shown: Someone will abuse it. At Equinor, it has happened, and it will happen again. The simple but wrong response is to put everyone in jail because someone did something wrong. The right response is to deal firmly with those involved and let it have the necessary consequences, which of course should be in proportion to the severity of the incident. This could involve dismissal, although this would not happen very often. This is not about being soft and evasive.

These mechanisms need to sit on top of what we call a "cost-conscious mindset", but they also stimulate and develop such a mindset. Management processes drive culture, for better or for worse.

The mindset we are after implies asking different questions when a decision with cost implications is made. It is about frugality, about being cost-conscious on every dollar spent.

The traditional question is "Do I have a budget for this?" Here, the budget represents a "ceiling" that we set on costs, where anything higher than the ceiling is not considered. By all means, it works! But that ceiling is just as effective as a "floor". Budgets that are set aside tend to be spent, and it is nothing but rational management behaviour. Don't overspend (you will be beaten up), but don't underspend either. Otherwise, you might be asked, "Why did you ask for more money than you really needed?" You might also risk getting less money next year.

The result? Almost everybody comes in spot on budget. And how do many finance people react? "What fantastic control we have!" I beg to differ. What if some should have spent more, or some less, because things had changed? I can hardly think of a bigger illusion of control.

Instead of the "Do I have a budget?" question, we should ask different and better questions:

These are questions that should be asked all the time, on every dollar. While we also hear such questions in a budget regime, it is normally at the end of the budget period, typically in November and December. "The budget bag is almost empty; we have to be cost-conscious!" (but only until year end because then the bag is filled up again).

The ultimate goal is to get people to think about company money in the same way as their private money. The first step is to start trusting people more than traditional budgeting does.

As mentioned at the beginning of the article, we found inspiration from the Beyond Budgeting model. There are two common misunderstandings about Beyond Budgeting. First, many believe that it is just another way of managing cost. That is correct in a sense (and we have just discussed how it can be done). But Beyond Budgeting is about so much more.

The model addresses many other important parts of a management model such as rhythm, target setting, forecasting, performance evaluation, and rewards. The 12 Beyond Budgeting principles also address key leadership issues, including purpose, values, autonomy, and transparency.

The second misunderstanding is that, because Beyond Budgeting means no budget, cost is not important, and everybody can spend whatever they want. This is definitely not the message.

As already discussed, we will still be doing what the budget tried to do for us. We are not kicking out some of the good and necessary intentions of a budget. We are simply saying that we need something more intelligent and effective than what a 100-year-old management technique can offer. That is how old the traditional budget concept is.

The pioneer of budgeting? James O. McKinsey, the founder of the consulting firm McKinsey & Company. I am sure that his intentions were the best in explaining budgeting as a management tool in his 1922 book, Budgetary Control; he wanted to help organisations perform better. Today, we are living in very different times. It is these new realities that Beyond Budgeting reflects and addresses. (See the list, "12 Principles of Beyond Budgeting".)

Many other great concepts and communities also challenge traditional management, and beliefs about leadership and management. To my knowledge, however, none of these have any clear recommendations about how to manage cost in different and better ways than through the traditional, detailed, and annual budget. Although this might be regarded as "finance stuff", it is too important to be ignored. Hardly any part of the management model affects a manager more decisively than a budget. Everyone is involved in the budget process, and almost everyone hates it.

For a company embarking on a radical transformation journey, there is therefore hardly a more effective place to start. Making tangible and positive changes to the budget process is a very effective way of signalling real change. It affects all managers, instantly and concretely.

I conclude with two examples from other companies. They have both built a mindset and a culture so strong that they hardly need anything in addition.

A Beyond Budgeting pioneer, the major Swedish bank Handelsbanken has operated without budgets (and also without targets and individual bonuses) for almost 50 years. Cost control is achieved through autonomy and transparency. Branches are benchmarked on the key performance indicators (KPIs) return on equity, cost-to-income ratio, and customer satisfaction. It's all visible, and nobody likes to be a laggard. The branches have full autonomy to apply the right doses of cost to optimise their performance on these three KPIs. Very simple, very self-regulating — and very effective. Handelsbanken is among the most cost-effective universal banks in Europe, with a cost-to-income ratio lower than most international banks.

And the company's only concern about using transparency as the only control mechanism? That it would be too effective!

Many organisations adopting Beyond Budgeting experience lower costs (although many admit that they feared the opposite). Others see little change in their cost levels, and a few even see somewhat higher costs. What they all have in common, however, is a change in the composition of cost. They see much more "good cost" (which creates value) and much less "bad cost" (which doesn't).

Editor's note: Case studies on Handelsbanken and Miles are taken from the author's book Implementing Beyond Budgeting: Unlocking the Performance Potential.

12 principles of Beyond Budgeting

1. Purpose: Engage and inspire people around bold and noble causes — not around short-term financial targets.

2. Values: Govern through shared values and sound judgement — not through detailed rules and regulations.

5. Autonomy: Trust people with freedom to act — don’t punish everyone if someone should abuse it.

7. Rhythm: Organise management processes dynamically around business rhythms and events — not around the calendar year only.

9. Plans and forecasts: Make planning and forecasting lean and unbiased processes — not rigid and political exercises.

11. Performance evaluation: Evaluate performance holistically and with peer feedback for learning and development — not based on measurement only and not for rewards only.

Bjarte Bogsnes is active in the Beyond Budgeting movement and heads the implementation of Beyond Budgeting at Equinor (formerly Statoil), Scandinavia's largest company. He is the author of Implementing Beyond Budgeting: Unlocking the Performance Potential. To comment on this article or to suggest an idea for another article, contact Alexis See Tho, an FM magazine associate editor, at Alexis.SeeTho@aicpa-cima.com.