When the coronavirus pandemic brought lockdown and social distancing, BrewDog faced the prospect of its 102 bars, from Columbus, Ohio, in the US, to London and from Berlin to Brisbane in Australia, remaining closed for the foreseeable future. This implied a 70% drop in revenue overnight.

But the brewer and distiller's immediate response to the crisis was to look at its resources and work out how they could be put to best use. The sudden public need for vast quantities of hand sanitiser as a result of the pandemic created an opportunity for BrewDog to pivot some of its operations. The company's experience with making quick strategic changes, which has helped fuel its rapid growth in recent years, enabled the swift introduction of a new product line in the pandemic-altered environment.

The scarcity of hand sanitiser in the region around its headquarters in Ellon, near Aberdeen in Scotland, led BrewDog to dedicate its distillery to producing this important tool in the fight to prevent the spread of the coronavirus. The first batch was distributed within a few days, free of charge, to healthcare services, charities, and other frontline workers, explained Ben Press, ACMA, CGMA, BrewDog's retail finance manager.

The transition did come with challenges. Given the sudden demand generated by the pandemic, the pump bottles normally used to dispense hand sanitiser could not be sourced immediately, so the team solved this packaging dilemma by using containers they already had on the premises. The first batches of sanitiser were delivered in beer bottles.

The pump dispenser bottles eventually arrived, and the distillery began running 24 hours a day. It developed the capacity to produce up to 12 hectolitres per day, the equivalent of 12,000 100ml bottles of hand sanitiser. By 28 April, the number of units donated had reached more than 250,000.

The vans usually used for local deliveries of beers and spirits are now being used to distribute the sanitiser, as well as to deliver meals to people who are isolated or in rural areas.

When the message about the changes to operations went out to employees, "everybody wanted to chip in and help", Press said. "We have this mentality that we're all in it together, and everyone just does what is needed, so for us this is kind of a normal thing."

In his three years with the company, as well as being responsible for the management accounts of the company's bars, Press has packed bottles of gin, done an occasional shift in the bar, and worked in the lab, as well as on the packaging line in the brewery. 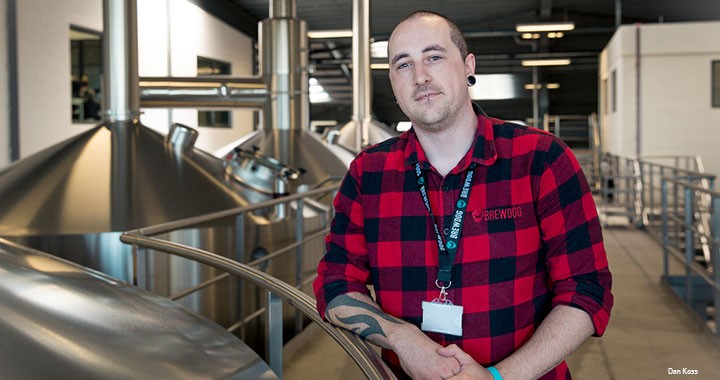 Ben Press, ACMA, CGMA, BrewDog’s retail finance manager, says “everybody wanted to chip in and help” when employees learned of the changeover to producing hand sanitiser.

Since it was founded in 2007, the company has undergone rapid expansion, has operations in the US, Australia, and Germany, and employs 3,000 people. "We have the ability to react very quickly to any changes, given that we've been growing so fast," Press said. "We're used to working at pace, so turning production around pretty quickly wasn't as scary as it could have been."

This spirit of innovation and flexibility is rooted in "a shared mentality and a shared vision of what we want the company to be", he said. "By making sure we've got all like-minded people, it makes things like this so much easier."

Cultural fit is the first priority in the company's hiring decisions. "What our recruitment team always looks for is, first, whether the person is a good fit, and then, do they have the skillset to do the role?"

One way of gauging that fit is to seek people with passion. As Press described it, "we like to get geeky people. You can be geeky about anything; Lego is a popular one. Our former people director was obsessed with Christmas films". This latter passion involved owning every single one that had ever been released on DVD, categorising them, and starting to watch them three months before Christmas to get through them all in time for the festive season. "It's just weird and wonderful things like that — if you can tap into that geekiness, you can make people geeky about beer, and about BrewDog, and about what we're doing."

To keep the business going and preserve as many jobs as possible through the lockdown period, the two co-founders, James Watt and Martin Dickie, announced they will not draw a salary in 2020. The COO and board members have each agreed to take a 50% pay cut. UK government programmes, such as the furlough scheme and business rates (local tax) relief, will also help.

The aim of the sanitiser project was to meet an immediate need in the local community as quickly as possible. "As soon as our founder, James, put the word out, we were bombarded with requests, through social media and our mailboxes, from people trying to get hold of hand gel, which just shows how in demand it is," Press said.

The gel made in the initial phase of production contained 69% alcohol, above the 60% minimum recommended by the UK Health and Safety Executive and in accordance with World Health Organization guidelines. It was welcomed by charities including the Aberlour Trust and the ARCHIE Foundation, which support children and families in the local community.

In the subsequent phases, learning has prompted adjustments and improvements. In response to feedback from local hospitals that the alcohol content required for sanitiser used in clinical care is higher than that used by individuals, BrewDog worked with the UK's National Health Service to meet that specification. On 3 April, less than two weeks after the first batch was produced, the company received approval and an order for the new version of the sanitiser, which has an 80% alcohol content.

As its bars around the world remain closed, the company has created a virtual alternative, a further example of its adaptability and willingness to innovate. "The virtual bar was an idea that we came up with so that regulars to a certain bar would still be able to catch up with all the people that they might normally see whenever they go out, and have a drink together, without leaving the comfort of their own home or breaking social-distancing rules," Press said.

The virtual bar opened for the first time on a Friday, 27 March, and featured a pub quiz, guided beer tastings, and live music. Held over Zoom, it attracted more than 1,000 participants, the maximum number permitted by the online meetings platform. 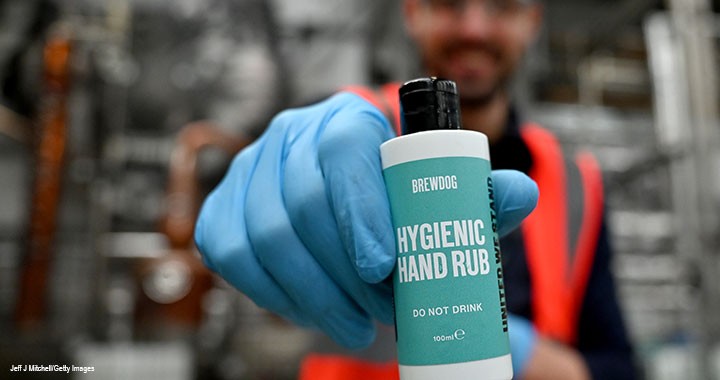 The distillery developed the capacity to produce 12,000 100ml bottles of hand sanitiser.

Samantha White is a freelance writer based in the UK. To comment on this article or to suggest an idea for another article, contact Sabine Vollmer, an FM magazine senior editor, at Sabine.Vollmer@aicpa-cima.com.