Over the past 100 years, management accountants have had a considerable impact on the Guinness brand. In the early years after CIMA's founding in 1919, the popular drinks producer built a brewery in London to survive a trade war, invested in new "accounting machines" that would be antiquated today, and formed a new company to expand into overseas markets.

Exploring Guinness's history provides an interesting glimpse of the many strategic decisions that management accountants have employed throughout CIMA's history to contribute to the good health of their employers.

The Guinness business was founded in 1759 by Arthur Guinness. It is now part of Diageo Plc, and the famous Guinness stout is one of its key brands. I first visited the Guinness archives at St. James's Gate, Dublin, in 2011, and with colleagues have written several pieces on the brewery's accounting history.

Breweries were central to the two UK stock market boom periods of 1886—1890 and 1895—1900. Guinness itself floated on the London Stock Exchange in 1886, and it was one of the largest breweries in the world at the time. As a public company, Guinness's accounting became subject to scrutiny by shareholders, and the company's archival records are more complete from 1886 onwards. The records are extensive, so what follows is only a sample of management accounting history over the years. It is worth noting that Guinness never reported a loss from 1886 to 1996, when it became part of Diageo Plc.

My first piece of work at Guinness revealed some insights on how costs were tracked for the cooperage. Wooden casks were made at the on-site cooperage, stout was delivered to customers in the casks, and the casks were returned for reuse. The archival records show that the costs of making the casks (mainly wood and labour) were accurately captured at least from the 1890s. Once the costs were accumulated, the casks were depreciated. The cost of cask repairs was also captured. The records show that from the 1860s at least, Guinness had a detailed cask ledger, which tracked cask movements to and from the brewery's customers. If customers did not return empty casks, the brewery would seek to recover the cost of the casks. The movement of casks was captured visually, using a "cipher" on the side of each cask, as they left and were returned to the brewery. It is interesting that this system from at least 160 years ago is still more or less in use — of course, an enterprise resource planning system does the tracking today.

Later, World War I had a significant effect on costs and accounting at Guinness. At the time, the main brewery was still in Dublin, with stout being shipped by sea to UK cities such as Cardiff, Liverpool, Glasgow, and Bristol. While it may be difficult for us to put ourselves in the shoes of a management accountant in 1914, the records reveal that initially it was thought the war would not last long. As the war dragged on, the presence of German U-boats in the Irish Sea was a concern. Indeed, a steamer used by Guinness, the W.M. Barkley, was torpedoed and sunk on 12 October 1917. The accountants at Guinness initially opened a "War Risk Insurance Fund", putting aside £10,000 as a cost. This was subsequently allocated to the company's stores (typically at ports where stout was shipped to) according to the volume shipped there, and also to the malting department on imports of barley by sea. This, indeed, was likely an early form of activity-based costing.

After the war and subsequent Irish independence in 1922, Guinness maintained its brewery in Dublin but also built a brewery at Park Royal in London that opened in 1936. A key driver behind this decision was the Anglo-Irish Trade War (as it became known) from 1932 to 1938. It was in essence a tit-for-tat tariff war, which made each country's products expensive. What is interesting from an accounting perspective is that the accounting systems set up in the new London brewery replicated those in Dublin.

A little earlier, in the late 1920s, Guinness trimmed down the number of accounting staff in Dublin by 11, using the latest technology of the time — Smith Premier Accounting Machines. These were typewriters with mathematical functionality. They allowed accounting clerks to prepare customer statements more rapidly, and no doubt led to more rapid collection of customer receivables. By March 1929, customer balances could be sent monthly to all customers — something we take for granted today. Previously, balances were sent only to customers who had a minimum level of activity.

Of course, to prepare balances in a timely fashion, the accounting department needed to have all documentation, and this implied changes in other tasks. During 1929, a series of deadlines was introduced to support the preparation of balances — for example, the cash book was to be closed by the first day of each month. The fact that the machines could perform calculations also saved time in other areas. For example, the audit department no longer needed to manually check the calculations of discounts and allowances.

Accounting at Guinness was quite progressive by the end of the 1930s, and you may think perhaps it was led by a good head of finance — what today would be termed the CFO. At Guinness, however, the chief accountant was the key person, and, perhaps surprisingly, this role was typically occupied by someone who had learned from a predecessor. It was not until the 1960s that professionally qualified accountants began to fill the role.

However, there are more similarities than differences when comparing the role of a modern-day CFO to the chief accountant at Guinness in the 1920s and 1930s. The role entailed oversight of all internal accounting, the preparation of annual accounts and dealing with auditors, working closely with the board, assessing risk, managing property, and managing projects. A key difference from today's CFO was that the chief accountant role did not command a position on the board. This may be due to the family nature of the Guinness company — family control was maintained until the mid-1980s.

The 1950s and 1960s saw Guinness expand its business. A new company, Guinness Exports Ltd., was formed in 1951 to push into overseas markets. As the organisation grew, what was termed a "planning and control system" (ie, budgetary control) was implemented at the St. James's Gate brewery in Dublin around 1950. It was instigated by Sir Hugh Beaver, an engineer and Guinness's managing director from 1946 to 1960. While I have not fully explored the archival records on this, it does seem the increased emphasis on budgets and control was not favoured by everyone. A poem, "The Last Accounting", submitted anonymously to the company magazine in 1950, gives a humorous insight:

A few more fleeting years shall roll
And we shall face, with quaking soul,
The Final Budgetary Control,
Before the Great Director.

Grant then, O Lord, that we may switch
From those sub-headings under which
We seem particularly rich
To some less solvent sector.

Grant that we be not overspent,
Beyond the powers of argument,
O Lord, by more than ten per cent,
For each specific Heading.

Let us not seek to transfer out
Items we are not sure about
(And which we'd rather do without,
Were we alone to judge it).

And when the Hour approaches fast,
And the time for Argument is past,
Grant, in Thy mercy, at the last,
A Supplementary Budget.

A puzzling fact about Guinness stout is that one of the locations where it is brewed is Lagos, Nigeria. Stout is a heavy drink on a warm summer day in Ireland, yet the much warmer climes of Africa are a large market for stout.

I explored the decision to build a brewery in Lagos in the early 1960s. Guinness had for many years sent salespeople around the globe to seek out new markets for its stout. Reports from Nigeria and other West African countries in 1949 were positive. From 1949, stout brewed in Dublin and bottled in Liverpool was shipped to Nigeria. In 1959—1960, the Guinness board explored the option of shipping in bulk and bottling locally in Lagos. 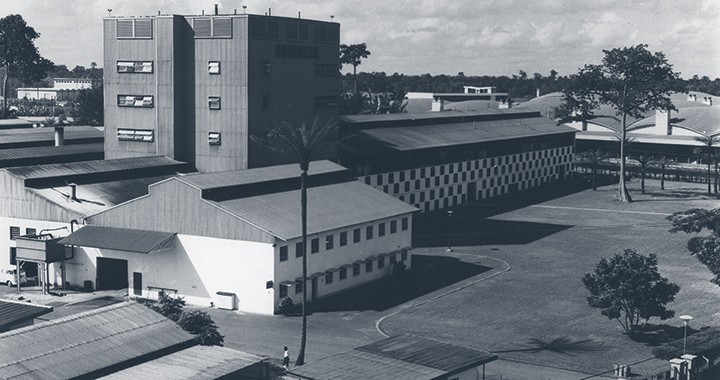 The plan was to work with a local partner, and the idea was predicated on it costing less than the Dublin/Liverpool arrangement. Based on inputs from the accountants, the board decided in March 1960 to pursue bottling in Nigeria, subject to favourable taxes and customs duties — Nigeria was in the process of becoming an independent state, and the level of taxes and duties was uncertain. Once the board decision had been made, the accountants got to work on more detailed costings.

At the same time, it seemed the Nigerian state looked more likely to impose import duties as a way to protect local producers of various products, including beer. The accountants generated various analyses based on predicted sales levels. In all cases, the brewing option was the most profitable and had the shortest capital recovery period — about four to five years. The board thus changed its decision, deciding to build a brewery, which opened in 1963.

These examples provide a brief insight into how management accounting has developed over the last 100 years or so in the context of Guinness. The technology has changed, but management accountants at the company have long been providing — and continue to provide — information to decision-makers on contemporary, complex business issues. 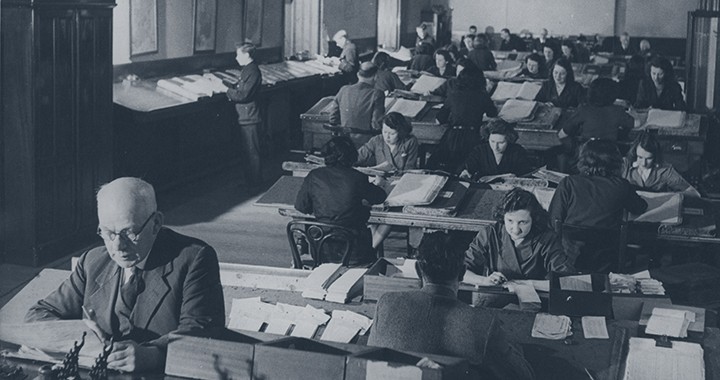 Guinness employees, circa 1948, kept track of the casks that went out to customers and were returned. (Photo courtesy of Guinness Archive, Diageo Ireland)

Martin Quinn, ACMA, CGMA, Ph.D., is senior lecturer in accounting at Queen's University, Belfast in the UK. To comment on this article or to suggest an idea for another article, contact Oliver Rowe, an FM magazine senior editor, at Oliver.Rowe@aicpa-cima.com.