Japanese video game giant Nintendo's 2016 decision to rerelease mini versions of its vintage gaming systems, including 1980s and 1990s classics Nintendo Entertainment System (NES) and the Super NES gaming systems, seemed like an odd strategy when first considered. The company had just barely returned to profitability in 2015 after years of malaise, including falling revenue and operating losses from 2012 to 2014, according to the company's financial disclosures.

The company's flagship console, the Wii, was declining in popularity, and the company needed a hit to boost sales and revenue. It was a symbiotic relationship: Without a hit hardware platform, software sales of Nintendo's games — a significant revenue stream — also fell, driving all measures of the business downward, according to the company's earning statements.

The rerelease of the NES console, loaded with 30 classic games for only $60, and the subsequent rerelease of the Super NES, with 21 games built in at a retail price of $80, appeared to be the opposite of what Nintendo needed to do to boost hardware and software sales. Instead of a big-ticket platform that would drive software sales, the company was offering a budget item that consumers could not spend more money for games on.

It almost looked as if Nintendo was simply cashing in on customers' nostalgia for a short-term sales boost.

But Nintendo's main goal may not have been simply to sell many of the retro consoles. While Nintendo declined to comment for this article, in a 2017 corporate briefing, Tatsumi Kimishima, then the company's president, acknowledged that the rerelease of those systems was in part a means to an end. "We also see the nostalgic interest in these products as an opportunity to draw consumers' attention to our latest game system, Nintendo Switch."

The strategy worked. For Nintendo, the reissued consoles appear to be a huge hit in multiple ways. Wildly popular when first released — combined, the original consoles sold more than 100 million units in the 1980s and 1990s — both of the rereleased products quickly sold out and commanded high prices on the resale market. Nintendo sold more than 10 million retro units since relaunch, contributing at least 4% of the company's total sales in the last eight quarters, according to a Bloomberg analysis.

More importantly for Nintendo's bottom line, the Nintendo Switch platform — retailing for $300—$400 — is doing very well. From its release in the first quarter of 2017 through August 2018, the platform sold 19.6 million units, more than rival Xbox One but less than industry leader PlayStation 4, according to VGchartz.com.

In the process, they've helped a company that had lost some market share in previous years return to the pantheon of top gaming manufacturers.

Yes, nostalgia is back, in a very big way. But more than just appealing to a customer's feelings about the past, it is helping companies like Nintendo boost the bottom line.

Nintendo and the appeal of childhood

Originally released in 1983, the NES helped turn around what had been a major decline in home video game sales, particularly in North America. With iconic characters like Mario and his brother, Luigi, and games featuring narrative adventures, the console was a huge hit, eventually selling 62 million units, according to Nintendo's historical sales data. Eight years later, the Super NES came out; featuring new games and characters, the system sold 41 million units, according to Nintendo.

In both cases, a large proportion of the users were children and young adults. And because of the earlier decline in the home gaming market, many had never owned video games before. As a result, the products had a huge impact on young players. "A lot of people loved that character [Mario], loved the experience on that platform at that time," said Jitendra Waral, a consumer electronics analyst for Bloomberg Intelligence. "It had a massive following."

Nintendo is no stranger to nostalgia marketing; over the decades, the company has reinvigorated the Mario franchise in new games multiple times. But the November 2016 relaunch of the NES, dubbed the NES Classic, was something different. The company released a limited number of consoles that, though small, looked and felt much like the original 1980s product.

In its marketing for the product, Nintendo didn't shy away from obvious attempts to capitalise on the past. "Many of us have fond and wonderful memories of the original NES," said Doug Bowser, Nintendo's US head of sales and marketing, in a press release accompanying the product release. "We want to replicate the nostalgic feelings of sitting down and playing the NES with your family for the first time."

Many consumers apparently had the same urge. After all, someone who first experienced the NES as an adolescent in the mid-1980s would be in their 40s in 2016, perhaps with kids in tow — just the right age, according to Luan Wise, a UK-based marketing consultant and author, to rediscover the toys of their youth and (ostensibly) introduce them to their children. The first NES Classic rerelease was a giant success, and the product, a limited edition, quickly sold 1.5 million units and was soon unavailable, according to a Bloomberg analysis.

"It's a great way of monetising decades of nostalgia based on the volume of people playing it," Waral said. "It helps the brand; it's like a homage." 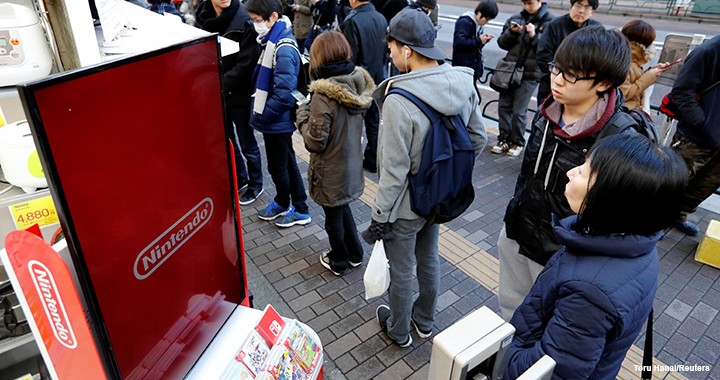 People queue up to purchase the Nintendo Switch game console outside an electronics store in Tokyo in March 2017.

There's a reason that marketers try to connect their products to the past. Simply put, nostalgia sells. "People are human, and everybody wants to reminisce about a product or feeling from their years growing up," said Matt Thorpe, an internet marketing consultant in London. "It doesn't always matter what the product is; it's the feeling that it creates. Emotion gets people to act because they want to hold on to that feeling as long as possible."

Marketers have always known that appealing to consumers' emotions, rather than simply their intellect, can be a powerful way to connect with them. And nostalgia is a fundamental human emotion, according to researchers. Constantine Sedikides and Tim Wildschut, both professors of social and personality psychology at the University of Southampton in the UK, have extensively studied nostalgia and have found that it frequently leads to warm, positive feelings that can counteract loneliness and boredom.

Anything that stimulates good feelings can be effectively harnessed by those trying to convince others of something.

But nostalgia seems to have a particularly strong effect when used in advertising. In 2014, Sedikides, together with Jannine Lasaleta of the Grenoble School of Management in France and Kathleen Vohs of the University of Minnesota, found that consumers value money less when they're feeling nostalgic and are therefore more likely to buy or consider buying something.

In a 2013 study, NBCUniversal Integrated Media noted that brands that connected their products to the past — like Jack Daniel's, Old Navy, and Sony — were at the top of its Brand Power Index.

But does nostalgia marketing work on everyone, everywhere, at all times? The answer is yes, kind of. Studies have shown that people of all ages and from all over the world can be affected by similar levels of nostalgia.

But there are variations. Obviously, nostalgia marketing isn't going to work on children or teenagers, who are still in the midst of their prime memory-forming years and don't have much to look back on. "It works best for those a generation on," Wise said.

That is, the ideal audience is about one generation removed from the era they're being reminded of. "For example, adults will become nostalgic about childhood toys when they have children of their own," she said.

Nintendo's situation isn't necessarily typical: Not many firms have products that were beloved decades ago and can be successfully revived. But many can benefit from savvy marketing efforts that make use of nostalgia.

And this era — with its complicated political environment, dire threats of climate change, and ubiquitous presence of fast-moving technology — might be particularly nostalgia-prone, said Ann Handley, the chief content officer of MarketingProfs. "The impulse to recall simpler, quieter, pre-digital times is stronger than ever," she said.

So what works best?

The most effective nostalgia marketing balances old and new. That might mean referencing an old product or commercial, but giving it a modern twist.

The British chocolate company Cadbury did just that in bringing back its iconic advertisements for Milk Tray (a box of mixed chocolates). The adverts, which were popular in the 1970s, '80s, and '90s, featured a man braving danger to bring a woman a box of chocolates. In 2015, Cadbury announced a search to find a new "Milk Tray Man"; shortly after, it launched a rebooted commercial featuring the new hero.

The only hard-and-fast rule is to avoid the hard sell or anything that's too heavy-handed. "Forget hard marketing messages or manipulation," Thorpe said. "Focus on the emotion, and not the product."

Many companies have harnessed the power of nostalgia to great success. But the fact that nostalgia works so well might just lead to its eventual demise. These days, products and advertising evoking nostalgia are everywhere. There may come a time when consumers are tired of being reminded of the past, when the reference no longer draws fond feelings but rather a sense of cynicism. And when that happens, it'll be time for a new approach.

Amanda Abrams is a freelance writer based in the US. To comment on this article or to suggest an idea for another article, contact Drew Adamek, an FM magazine senior editor, at Andrew.Adamek@aicpa-cima.com.