Every merger and acquisition is different, and the integration of each deal faces different challenges.

Financial, legal, social, and political factors need to be considered in all deals but may be more important in a cross-border transaction. Together these factors provide the context for deals, the complexity surrounding deals, and some of the implications for integration (see the diagram, "Interdependencies in Cross-Border M&A").

Well-prepared companies will understand how these factors relate to potential deals within target jurisdictions, plan accordingly, and be prepared to adapt the deal structure, deal objectives, or integration plans as necessary. Companies need to understand local factors, too, and extra attention is needed when acquiring or operating for the first time or expanding a business in a foreign jurisdiction.

Case studies on failed cross-border M&As are littered with examples of companies that overlooked some of the factors above or based decisions on bad assumptions in a rush to get the deal signed. What may appear in retrospect to be a simple oversight can cause risks and issues during integration, erode or destroy deal synergies, or, at worst, materially harm the reputation of the new combined company.

This diagram provides a snapshot of the web of key legal, financial, political, and social interdependencies related to cross-border integration. 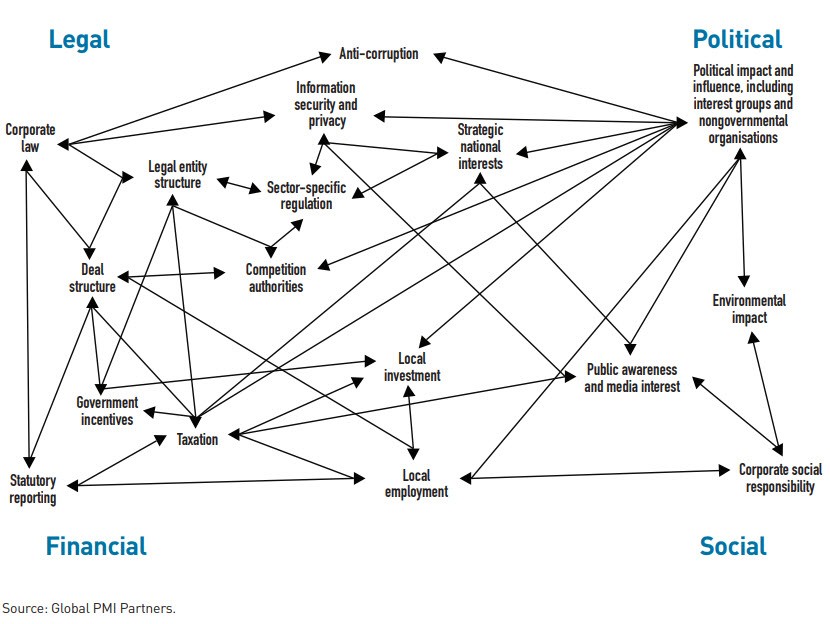 Tax, for example, is a local jurisdiction matter; therefore, the implications of tax differences between tax jurisdictions are among the key determinants of deal structures and optimal legal entity structures. The implications of taxation go well beyond deal structure, and thorough tax integration planning prior to close can still often be overlooked by the buyer in the rush to get the deal done.

Tax is one of the most important factors in acquisition synergy models because of the variations in corporate tax levels and rules across different countries. Tax efficiencies not only make or break synergy targets — with the global trend for corporate tax rates becoming more competitive recently — they also can be the sole rationale for M&A transactions. Beyond levels of corporation tax, related factors such as stamp taxes, value-added tax (VAT), incentives for new investment, subsidies and tax relief, and transfer-pricing mechanisms need to be considered.

Getting the right legal structures in place is key. Many basic legal and regulatory aspects need to be considered. The focus will usually be on deal structure and legal entities, competition, and sector-specific regulation.

In cross-border deals, acquisitions can be structured in different ways according to the acquirer's commercial objectives. Business deals can be structured as asset deals, where specific assets and liabilities are purchased, or as stock deals, where the owners' shares of the legal entity are traded. Most acquisitions are stock deals, and the ratio increases with the size and complexity of the deal.

If a full legal subsidiary already exists, then the legal, tax, and finance workstreams normally plan an appropriate integration path for these entities. However, if the acquisition is a geographical expansion with the acquirer having just a branch office or no legal entity at all, then the target can become the legal subsidiary in that market relatively simply.

Also, each country is governed by its own regulator whose explicit aim is to protect the rights and interests of local consumers by identifying potentially monopolistic behaviours and to put in place rules, regulations, and measures necessary to prevent these. Authorities follow laws, regulations, and merger guidelines that cover different types of integrations.

Social factors can touch upon public interest and public policy, environment factors, pro bono and social contributions, local investment in infrastructure, and often most acutely upon local employment. The objectives of a cross-border deal need to be transparently presented to stakeholders, and if there are difficult decisions that impact local communities around the acquired business or the wider public, these should be well considered, well prepared, and well justified. It is probably difficult to draw too much quantitatively about the impact of social factors on M&A, but the effect on integration is huge. Social concerns permeate the workstreams of leadership, human resources, communications, culture, operations, and research and development.

Like social factors, political interdependencies can be hard to predict. Generally, politicians and influence groups such as unions, campaign groups, and other nongovernmental organisations will be interested in a cross-border M&A if the integration causes significant changes to causes they are interested in, which will tend to be the legal, financial, or social factors listed earlier.

The most common cause of political intervention is job losses. A foreign acquirer whose rationale entails cost synergies by making job cuts in the target market is a political and economic threat to the local country with little upside. While some back-office consolidation is understood and accepted politically, wholesale closure of offices or operating locations and movement of jobs offshore will be fiercely resisted unless it is obvious that no other options are available, and those jobs would otherwise be under threat anyhow.

For many companies, an M&A event is one of the most intense and seemingly chaotic periods they will ever experience. In addition to the areas already outlined, consider all the things that can be "in play" when planning an integration:

Leadership "voids" during M&A events can negatively impact momentum or destroy and permanently hobble a transaction right out of the gate. Your leadership posture during an M&A event should be carefully planned and co-ordinated to avoid unexpected results and issues.

Everyone, from the CEO to those chosen to help lead the integration, should:

Integration planning for cross-border deals needs to start during due diligence, with integration risk management taking a holistic view of the legal, financial, social, and political implications of the integration. Companies acquiring in countries where they do not have existing business teams, operations, stakeholder relationships, or local knowledge are obviously exposed to greater risks than those performing vertical or horizontal acquisitions to build out their existing markets.

Effectively managing cultural differences will enhance understanding and deal success. Give the process of mutual cultural adjustment some time and move a little bit out of your comfort zone — the effort is worth it on a business and a personal level.

Finally, there is no substitute for strong leadership during any M&A event, particularly a cross-border transaction. Without strong leadership, the anxiety caused by M&A activities can overwhelm both the acquiring and target companies, and erode productivity and employee engagement.

Scott Whitaker and Andrew Scola are partners at Global PMI Partners, an M&A integration consulting firm, in the US and the UK, respectively. To comment on this article or to suggest an idea for another article, contact Sabine Vollmer, an FM magazine senior editor, at Sabine.Vollmer@aicpa-cima.com.