All over the world, severe weather is wreaking havoc on wine production and quality.

In the main winemaking regions of Europe, the extremes of late frosts and extended heat waves reduced the harvest in 2017. In South Africa, the world's eighth-largest wine producer, drought is a major, ongoing concern. In California's Napa Valley, wildfires fuelled by strong winds in late 2017 didn't burn much of the crop, but the aftereffects of smoke may affect quality for years to come. The California fires, at the height of the harvest season for grapes used in wine such as Cabernet Sauvignon, caused a loss of business as tourists cancelled tasting trips to the region, according to The New York Times.

Global wine production has fallen to its lowest level in decades, according to an annual industry report, State of the Vitiviniculture World Market. The report, released in April by the International Organisation of Vine and Wine (OIV), showed that the top three winemaking countries — Italy, France, and Spain — had production declines of 17%, 19%, and 20%, respectively, from 2016 to 2017. This led to a 14.6% overall drop in EU production, to 141 million hectolitres. The report cited adverse weather conditions as a reason for the decline.

Global wine output fell to its lowest level in 60 years in 2017 due to poor weather conditions in the EU. 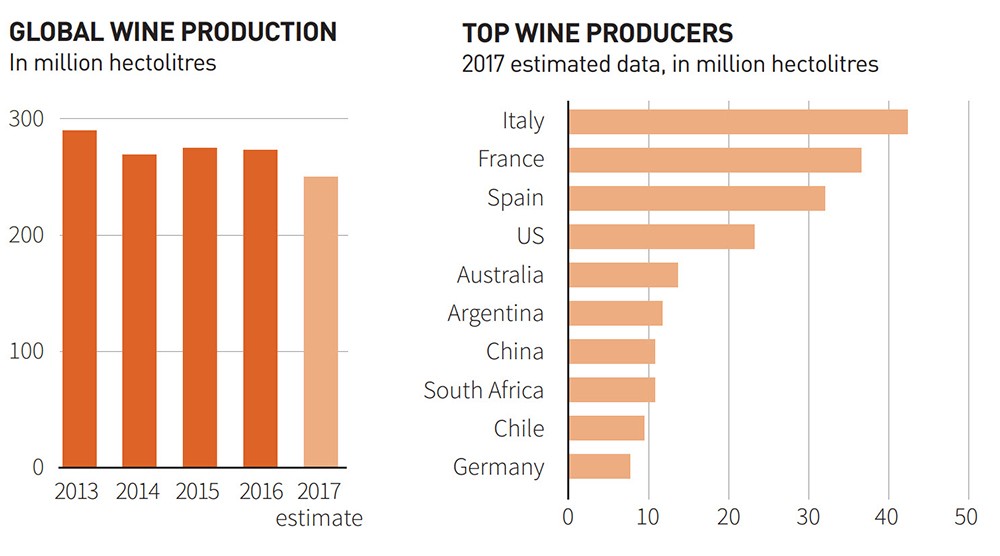