Prior to the 2011 uprising in Egypt that led to President Hosni Mubarak's stepping down from power, multinational building materials company Cemex developed a plan to manage fallout from just such a political crisis.

That plan came in handy: Within a few weeks the Egyptian military dissolved the country's parliament and suspended its constitution. Like many sophisticated multinational businesses, Mexico-based Cemex, which had significant operations in Egypt, had assembled an enterprise risk management (ERM) programme that included strategies for handling global political risks.

Months before the uprising, Enrique Alanis, Cemex's global director of ERM, and his team received intelligence from within and outside the company that "something was not right", he said. "The information was gathered from our own people in the region, as well as external people like market experts, industry trade groups, suppliers, and vendors. We also incorporated public sources of information like the internet, media reports, and public forums."

Armed with this insight, the company quickly took action. "The advance warning gave us time to prepare for how we would address the situation," said Alanis. "We had a strategy ready that pointed out [to the new regime] that Cemex was good for the country."

The company successfully communicated to the new leaders that it provided significant employment, and building products that many diverse businesses relied upon in Egypt. The result: Cemex was able to continue its business operations without missing a beat.

Alanis said: "At all times, our goal is to stay ahead of potential risks [and] to be ready if they occur."

Not all companies are as fortunate. Disastrous outcomes have included the confiscation, expropriation, and/or nationalisation of a company's assets in a foreign country. Examples over the years are far too numerous to cite, but they provide a cautionary tale for all multinational companies operating in politically unstable regions of the world.

In recent years, emerging economies such as Thailand, Myanmar, Brazil, Turkey, and the Philippines — countries that had achieved some measure of stability for several years — have experienced their share of political turmoil. They're not alone: According to the 2017 Government Stability Projection by consulting firm Verisk Maplecroft, more regions of the world are likely to experience a decrease in government stability in the next two years, with developing markets being the most susceptible. Among the factors behind these risks, according to Verisk Maple-croft, is anticipated volatility in US global trade and policymaking, underscored by the country's withdrawal from the Trans-Pacific Partnership trade deal and US President Donald Trump's threats to pull the US out of the North American Free Trade Agreement (NAFTA) with Canada and Mexico, in addition to global factors including Brexit.

The study underscores a growing concern of many C-suite executives, including CFOs. Another example: A survey by McKinsey & Co. in 2016 found that the number of corporate executives identifying geopolitical instability as a "very important business trend" had doubled over the past couple of years.

"Among the 13 trends we asked about, respondents most often expect that domestic political instability, as well as slowing growth in developed economies, will pose a threat to profits in the next five years," the study stated. "... Yet a vast majority say their organisations are not yet taking active steps to address these issues."

This complacency may have disastrous results for finance departments. Aside from asset expropriation, political instability also can lead to currency inconvertibility, a situation where one currency cannot be exchanged for another currency. Contracts in the foreign country may be repudiated — the duties of one party to another frustrated. Additionally, the sovereign nation may default on payments owed the company and/or wrongfully call on-demand bonds and guarantees. Banks, exporters, and investors owed money from foreign buyers may never see these receivables.

There's also the possibility of violence and the detention of employees — something that Cemex was watching for. "As part of our ERM process, we had developed early warning systems of potential problems like political insurrection and riots across our global footprint," said Cemex's Alanis.

Emerging economies are not the only countries vulnerable to shifting political winds. Powerhouse economies such as the US and Britain also are susceptible. Voters' dissatisfaction with the status quo in both nations fostered the election of a populist president in the US and approval for Britain to exit the EU. These decisions have generated serious questions about potential de-globalisation, with a corresponding impact on business prospects.

Lurking in the corners

Despite these sobering concerns, many companies move forward with their global strategies, their eyes focused on growth more than on the impediments in the way. "Often the reasons to do business in an emerging economy are so enticing they appear to outweigh the risks," said Daniel Wagner, CEO of Country Risk Solutions, an operational risk management consultancy. "But it's folly to think a country that has been politically stable for several years will remain stable tomorrow." 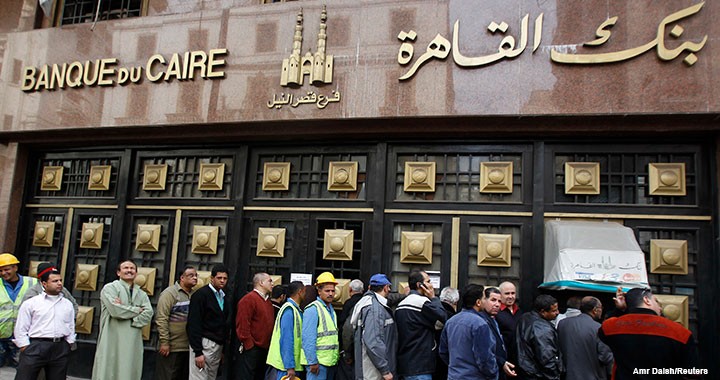 People stand in line to make withdrawals outside Cairo Bank in downtown Cairo on 6 February 2011, the first day for the country’s banks to open after a weeklong closure due to political protests.

Managing the risks and rewards

Political risks are not limited to companies that conduct business on the ground in a country. "Almost every business is global in nature today, simply because their supply chains are global and their customers are often global," said Bodhi Ganguli, lead economist for Dun & Bradstreet's country risk team. "Companies no longer produce and sell in one place anymore. If a coup breaks out in a country where a critical component is manufactured, it can put the brakes to the production line."

Consequently, virtually all companies must heed global geopolitics. How can they manage a complex risk that takes on the guise of a multiheaded Hydra? "You need to weigh the strategic value of doing business in a country against the array of political risks, measuring the pros and cons," said Charles Stevens, an assistant professor of management at Lehigh University, where his academic focus is on global strategy and political risk.

"There is no absence of information that can be obtained," Wagner said. "The problem is that as soon as it is produced, a period of time that can consume several weeks, it can become obsolete and irrelevant. It's better to have local people on the ground who really know what's going on to provide ongoing, real-time intelligence."

One such source may be a local organisation that partners with the company in sharing the risks and rewards of the opportunity. "It makes sense to choose a joint venture partner, particularly one that knows the ins and outs of the region," Wagner said. "Look for a partner that knows the local political landscape and understands the legal regime, preferably one with government contacts to get in front of a problem before it rears."

A related tactic is to secure local equity and debt to help finance the business venture. When local firms, trade unions, financial institutions, and government agencies have a stake in the venture, it can reduce adverse consequences. To get this buy-in, some companies pledge to financially assist the host country in improving quality-of-life objectives.

Political interference. The nationalisation and/or expropriation of assets by the host government.

Political violence. Strikes, riots, civil insurrections, and civil war, in addition to a hostile act like a coup.

Sovereign nonpayment. Nonpayment of financial commitments, obligations, and loans by the host government.

Supply chain disruption. Political, social, economic, or environmental instability that causes a disruption in the flow of goods and/or services into and out of a country.

When political instability threatens, the first priority for companies is the security of their employees. Stevens advocated the use of smartphone apps and hotlines that can alert local employees when trouble is brewing. "Your people can be scattered throughout a country; hence the prudence in giving them the means to instantly know what to do wherever they are," he said. "They should also contact their local embassy and have their passport on them at all times."

To reduce risk, many multinational companies employ local citizens. If a company needs to evacuate employees who are not citizens of the country, those remaining can continue some measure of business operations.

Even with the best due diligence, the unexpected can happen. "Sometimes you don't know you have a problem until you have one," said Wagner, who also is the author of the books Managing Country Risk and Virtual Terror. "That's why we advise you proactively have a plan in place for worst-case scenarios."

What CFOs need to know about political risk insurance

Political risk is increasingly on the radar for multinational companies, given rising concerns over geopolitical instability. One way companies try to mitigate the risks is through political risk insurance.

No two insurance policies are alike; each includes specific terms, conditions, and prices based on the perceived political risks in different nations. However, even in countries deemed to be at high risk of a political event, some measure of insurance is available.

"You can get it pretty much everywhere you need it, even in perceptibly high-risk countries," said Stephen Kay, practice leader for structured credit and political risk at insurance broker Marsh. "We recently were asked if we could get political risk insurance for a client in West Africa, which has a very uncertain political climate. We could."

Marsh also recently brokered a political risk insurance policy for a foreign company operating in South Korea that included full-breadth coverage, including the risk of war with North Korea. "The reason insurance markets took up the risk is that the company is located at the southern tip of the Korean peninsula, enough of a distance away from the border with North Korea to provide some semblance of comfort," Kay explained.

Insurance carriers selling political risk insurance include large international insurers like AIG, Zurich Insurance Group, Chubb, Great American, and Lloyd's of London, among others. The US federal government's Overseas Private Investment Corporation also offers the insurance. "Multinational companies generally can buy ample insurance coverage to protect foreign assets in most regions of the world, albeit at a price," Kay said.

The premium depends on the market's assessment of a country's political risk. Current hot spots include Venezuela, Argentina, Bolivia, and Ecuador in Latin America; Cambodia, Myanmar, and Thailand in Asia; Syria, Libya, Yemen, and Afghanistan in the Middle East; and multiple countries in sub-Saharan Africa.

Russ Banham is a freelance writer who is based in the US. To comment on this article or to suggest an idea for another article, contact Chris Baysden, a senior manager for FM magazine, at Chris.Baysden@aicpa-cima.com. 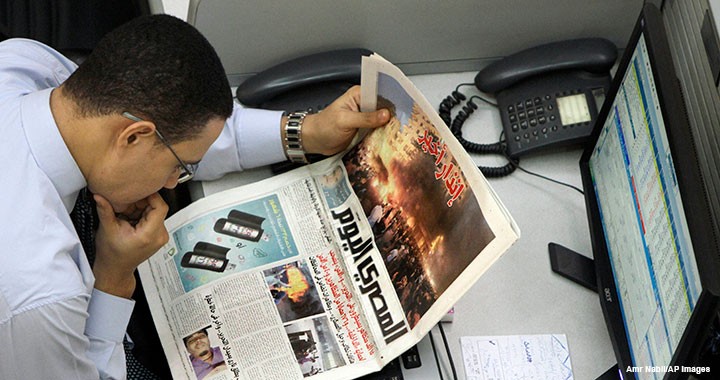 An Egyptian trader reads a local newspaper, which features coverage of clashes between protesters and security forces, at the Egyptian stock exchange in Cairo on 20 November 2011.
Advertisement