Researchers have long examined the link between mentoring and career outcomes, establishing broadly that companies with mentoring programmes tend to see a reduction in employee turnover.

But in this era of Big Data, why not dig deeper to determine the effectiveness of the coaching that upper-level leaders provide to protégés?

At a time when employee retention is among the most pressing issues facing global executives — the cost to replace an employee is roughly 20% of that worker's salary, and higher for executive positions — organisations would be wise to ask some key questions and dig into the numbers.

How explicitly can we define the financial differences — in terms of, say, salary development — between a group of mentored employees versus a group of employees without mentors? What impact can mentoring have on retention of employees at different ages? How deep is the connection between a mentoring programme and a company's reduced costs due to reduced employee turnover?

These are questions most companies with formal mentoring programmes can answer. I did just that when I studied thousands of individual employee data records at a large American company.

The results of the analysis could guide organisations that are striving to develop their talent or improve or test the effectiveness of their mentoring programmes. The data could also help financial professionals decide whether to become a mentor or mentee. Perhaps the analysis will inspire others to examine other non-financial data as a way to gauge performance of other employee development programmes or other internal initiatives.

Overall, there are some very basic benefits to mentoring. Mentees get good transparency on their performance. And they're often exposed to special projects in other parts of the company, thus increasing their network. Companies benefit because mentoring reduces turnover, and the performance of mentees improves. Mentors benefit because they get to network outside of their department and get new perspectives from younger employees coming up through the ranks. Direct line managers of mentees also benefit in that they get another perspective of their employees, which enables them to guide workers differently, with new input from outside.

My research confirmed some assumptions about the company I was studying. Among them: Employees who were mentored during the period studied reaped a financial benefit far greater than those who were not. They also were promoted much sooner within the organisation.

It also challenged conventional wisdom that mentoring reduces turnover: It did at this company overall, but not for the youngest employees, which raised questions about how to mentor young high performers.

The data also revealed some risks for those who seek out a mentor but then perform poorly in their job: Despite commendable efforts to improve, data indicate, their chances for promotion — and salary growth — were reduced.

The way in which I arrived at the conclusions could be followed by most companies that have a commitment to talent management and organised personnel and performance management data. For the purposes of this article, let's focus on the impact on mentees' income.

The company I studied offers a formal mentoring programme across salaried employees of all ages, job functions, and management levels.

To examine its effectiveness, I compared salary development, time to promotion, turnover, merit increases, promotional raises, and other metrics amongst 7,526 mentees and non-mentored employees who worked in similar business units and job functions between 2012 and 2014. The sample represented 34% of the subsidiary's headcount.

Within the sample, 1,213 (16%) were participants in the formal mentoring programme during the time studied. That presented a potential bias problem: Most of the company's mentees were considered high-performing or high-potential workers.

So I looked at the performance ratings of the 6,313 non-mentored employees and pulled out only those employees who were rated a 4 or a 5 by their managers on the company's five-point rating system. That covered high-performing employees, but it didn't capture those with high potential.

So to further ensure comparability, I filtered the list of high-performing employees using a company matrix that gauges employee potential (see Figure 1). The matrix describes nine types of employees. The lowest is "evaluate further": those who are below-average performers and have limited potential. The highest is "exceptional talent": strong performers with high potential to advance in the organisation. To identify those with the highest performance and potential, I chose the top four categories of the matrix.

The rationale: Mentoring brings many advantages to the mentee, including increased exposure, awareness, and performance. Mentoring also allows the mentee to perform in a way that's more visible to management when tackling projects set by the mentor outside the normal scope of a mentee's work. All of this enhances the likelihood that a mentee will receive promotional salary increases due to a higher level of visibility of improved performance and contribution to company value.

Through this increased level of awareness by management, mentoring also makes the mentee more likely to be recognised across the company when management engages in identifying bench strength (successors) for key functions in their areas of responsibility. It is therefore more likely for mentees to be considered to fill higher-paying jobs within the company, thus attracting higher salaries and, therefore, higher promotional increases.

After having examined rates of promotion, promotional increases, and merit increases, I was able to extrapolate the benefit to mentees over time.

The size of this financial advantage for mentees over non-mentees can be calculated in several ways. Figure 2 shows the salary development expected when applying rates of promotion, promotional increases, and merit increases over a ten-year period. I used a $100,000 starting point. 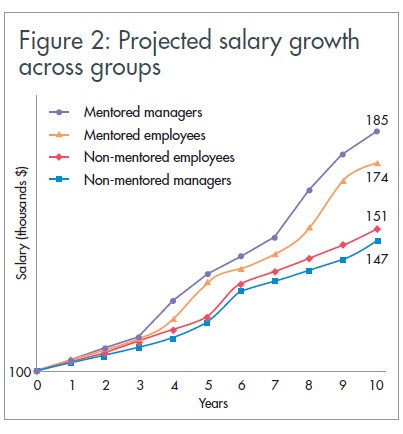 Alternatively, one can use this salary progression to calculate an effective annual increase (EAI). If we calculate these ten-year developments into such an EAI for each group, we can see in Figure 3 how this annual increase compares with the 3% merit increase all average-performing employees should theoretically expect to receive each year. 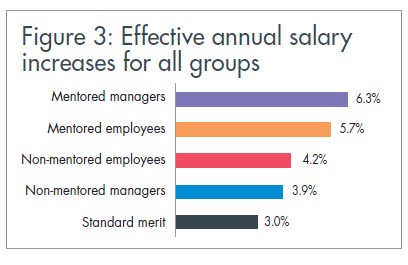 The formula for calculating EAI for each group is as follows:

Further analysis showed that, for the company in question, turnover was significantly lower overall for mentored employees when compared with turnover of non-mentored employees. In fact, the reduction was threefold, with employee turnover falling from 2.2% to 0.7%. But the data revealed something more nuanced when broken down by age. Turnover rates increased for mentees under 30. If not mentored strategically, they may leave the company more quickly due to the confidence building and self-awareness that comes from mentoring.

This research also attempted to calculate the impact mentoring could have on reducing the cost of employee turnover for such a large organisation.

Clive Davis, a senior director at Robert Half UK, estimates total replacement costs for a worker are at least 25% of that worker's salary, and possibly higher for high-level jobs. Research by the Center for American Progress, meanwhile, in 2012 showed that the average cost to replace an employee was about one-fifth of that employee's salary.

In terms of absolute financial value, for the sample of 7,000+ employees, this financial impact was calculated to be a cost reduction of $2.3 million. Extrapolated over the total number of employees in the subsidiary, the total impact comes to $7 million.

Of course, not every employee can be mentored, but this gives the scale of the cost employee turnover represents to large corporations and shows why mentoring is considered a good investment by those companies.

Anton James Duvall is CFO of the Americas division of Siemens Building Technologies.