One of the newest trends for improving the workplace gets very close to employees — close enough to be strapped around their wrists, clipped to their belts, or perched on their noses.

Although privacy concerns are prompting employers to tread cautiously in their implementation of wearable devices, their use is expected to expand. Technology market analyst firm Juniper Research predicts that worldwide revenue from wearable electronic devices, apps, and services for fitness and personal health alone will grow from an estimated $1.4 billion in 2013 to $19 billion by 2018.

The health-care industry is especially fertile ground for use of wearables. Benjamin Harris, CPA, CGMA, chief executive of US consulting firm BLH Technologies, has many clients in the health and science sectors and said the wearable market right now reminds him of the 1970s, when personal computers were just starting to gain popularity.

“Its potential is limitless,” said Harris, who uses a watch with a pedometer on it to monitor his exercise as he manages his diabetes. 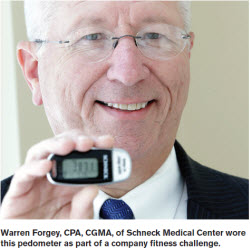 During a time of growing health-care costs, one common use of wearable technology by companies across the globe is to entice employees to improve their fitness and health. Human resources departments eager to improve employees’ health are challenging employees to wear devices that measure the number of steps they take during a day. In some cases, employees form teams that compete for prizes based on the number of steps their fitness trackers capture during a given period.

During an eight-week period last fall, 336 employees at Schneck Medical Center in Indiana — nearly 40% of the staff at the time — monitored their movements with pedometers during a fitness challenge sponsored by the human resources department.

The proportion of employees who said they were participating in regular physical activity rose 24 percentage points, according to Kathy Covert, the medical centre’s vice president for human resources. And traffic at the company’s 24-hour employee fitness centre has increased significantly. The company plans another competition this fall.

“We believe that providing healthy activities such as the pedometer challenge will make employees more aware of their health and the benefits of wellness; leading to happier, healthier employees and, ultimately, lower health-care costs,” said Warren Forgey, CPA, CGMA, executive vice president and chief administrative and operations officer for the medical centre, who participated in the fitness challenge.

Some early adopters are finding multiple uses for Google Glass in the medical profession. Shafi Ahmed, a surgeon in London, is experimenting with Google Glass for training medical students in surgery and serving patients outside of the hospital.

A doctor wearing Google Glass while performing surgery can provide an excellent digital view of the operation to students who are learning how to operate, he said.

“We’re actually increasing the level of interaction of the medical students, and they appreciate that,” Ahmed said. “I think the Glass has taken it to the next level in terms of the way we approach teaching it in the operating theatre.”

Doctors in London also will be experimenting with virtual consultations with patients through Google Glass. This could help alleviate shortages of hospital beds in London, according to Ahmed. The plan is to have a primary-care physician or nurse specialist wear Google Glass while examining patients and interacting remotely with a specialist at the hospital.

The doctors may decide to admit the patient to the hospital anyway. But in some cases, based on the virtual consultation, they might be comfortable providing a different course of treatment that won’t require hospital admission, Ahmed said.

Acceptance of wearable technology is not universal.

Julia Horwitz, a consumer protection counsel with the not-for-profit Electronic Privacy Information Center (EPIC), said the risks of wearables in the workplace include improper discrimination based on the activities of employees and data exposure for employers who don’t properly maintain and protect data.

It is important for device manufacturers to make sure privacy protections are built into their products, and for employers to have procedures regulating the interaction they have with the data, Horwitz said. “Technology and privacy need to coexist together rather than in opposition to each other,” she said.

Mike Greenhalgh, CPA, CGMA, is CFO of EMI Health, an insurer in Utah whose employees used wearable fitness trackers in a recent contest. He said EMI Health’s systems do not store information about individual employees’ fitness contest results or about health screenings that are part of the company’s wellness programme. He said he has access to some aggregate company data, but not individual data.

As a CFO, he would love to be able to calculate an amount of return on investment for the fitness and wellness programme. But he noted it’s possible that improved fitness could prevent a heart attack that would otherwise cost an employee his or her life — and that’s a savings that can’t be calculated.

“It’s hard to guarantee or measure,” Greenhalgh said. “But it’s hard to believe that you don’t stop a heart attack. That’s where you see the return on investment.”

The future is now

If you’d been asleep for 20 years and woke up to survey today’s global business environment, you’d be convinced that you had been cast in a science-fiction movie:

These developments can have profound implications for companies and innovators around the world. The only limit to their ability to transform business — aside from safety and privacy regulations — is your imagination.