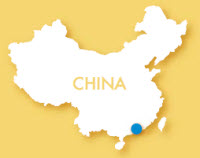 Guangzhou (pronounced ˈgwäNGˈjō) is the commercial hub of south China and the capital of Guangdong province. Located in the heart of the densely populated Pearl River Delta, about 120 kilometres north-west of Hong Kong, it is China’s third-largest city and one of the most rapidly developing.

Guangzhou’s population is 12.7 million. It has grown by 27% in the past five years. GDP per capita has increased by 10.2% over the same period, which is the 22nd highest among world cities.

“Guangzhou was traditionally the city in China that had the strongest business links with the British Empire,” said Vicky Li, regional director in northern Asia for the Chartered Institute of Management Accountants. “It is the cultural base of the Cantonese people, with a huge population of Chinese diaspora. It is fast becoming the most pro-business and pro-market region of China, and some of the country’s most successful businesses started, and flourished, in the city — Tencent and Huawei, for example.”