Europe has begun refilling depleted gas stores to shore up supply for the winter and guard against possible disruptions in flows from Russia, but a sky-high market means the move could cost about €40 billion more than at last year's prices.

Russia's invasion of Ukraine has put a huge question mark over stability of supply for economies and consumers in the region with benchmark prices almost 300% higher compared with a year ago.

Russia typically provides around 40% of the EU's gas but is now retaliating against Europe's sanctions — starting to cut back supply and making it harder for member states to fill storage sites and ensure consumers can keep heating their homes this winter if Moscow's gas taps turn off.

"Winter will be difficult without Russian gas. The key is to fill up storages over the summer as much as possible," Guy Smith, director of natural gas trading and LNG at Vattenfall, told Reuters.

The European Commission said immediate supply emergencies would take priority over refilling storage, with targets not applicable if it declares an EU-wide or regional gas supply emergency, meaning storage levels would be inadequate.

The possibility of significant supply cuts is rising, with Bulgaria and Poland already cut off from Russian gas and Ukraine halting Russian gas through a major transit point in a Russian-held territory.

Some subsidiaries of major gas seller Gazprom Germania, which was placed under trusteeship of the German energy regulator earlier this year, are no longer receiving gas, while Russia's Gazprom said it would no longer be able to export gas through Poland via the Yamal-Europe pipeline.

Gas held in storage typically accounts for around a quarter of the fuel used in Europe during winter, when demand is high.

By 10 May, Europe's gas stocks were almost 38% full, up from 26% on 21 March, data from gas infrastructure Europe showed.

The European Commission has called on gas storage operators to fill sites to at least 80% by 1 November this year, but some gas-reliant member states have gone even further, with Germany and Italy mandating storage to be 90% full by 1 November.

Hitting these targets won't be cheap, with high prices meaning the amount of gas that needs to be purchased will cost around four times the amount it would have at this time last year.

"Taking end-April as a starting point, total injections from the beginning of May until end-October need to reach 52.5 billion cubic metres, which will cost around €58 billion ($60.37 billion) based on a price around €105/MWh," said Leon Izbicki, associate, European natural gas at Energy Aspects.

The same amount of gas would have cost around €14 billion based on prices around €25 per megawatt hour in May 2021. The higher costs mean governments are likely to need to step in to provide incentives to make sure the stores are filled, Izbicki said.

"We have seen governments paving the way for such financial instruments, of example with Germany's new gas storage law ... and Italy's gas storage decree providing provisions for a contract for difference," he said.

Germany, Europe's largest gas user, currently has stocks around 39% full, up from 26% on 21 March.

"Storage levels have recovered quite well ... there is quite a lot of prudence being exercised by a lot of counter parties making sure that they do have sufficient stocks in storage. But they are actually incurring some costs by filling up as quick as they can," Vattenfall's Smith said.

Vattenfall owns a storage site in Germany close to the Dutch border. 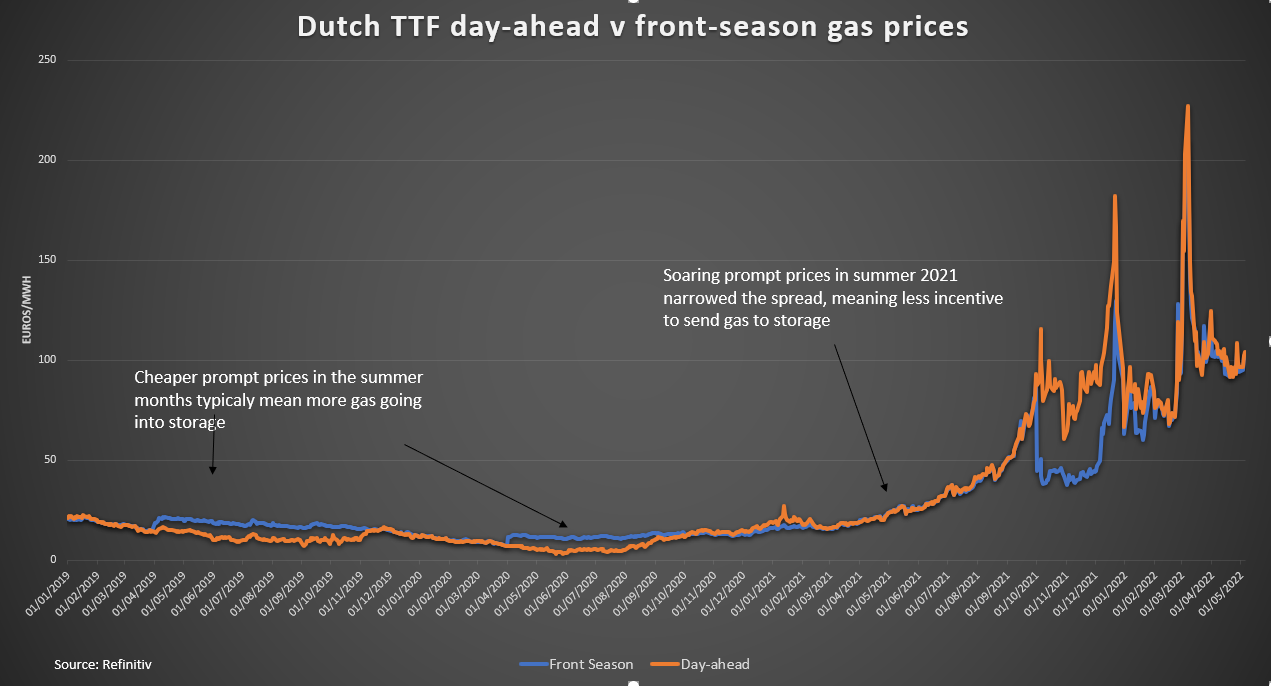 Last year, however, with soaring prices as demand returned following the lifting of COVID-19 restrictions, summer prices were higher than the forward winter prices, leaving the market backwardated, making it uneconomic to store gas and leaving Europe's gas stocks at more than a five-year low last winter.

Prompt prices this summer mostly continued to be higher than the futures for the winter so far this year.

Ongoing fears over Russian supply have kept short-term prices elevated, meaning governments are having to step in to offer incentives to make sure the storage sites are full.

German law allows Trading Hub Europe, a gas market hub overseen by the country's energy regulator, to use storage facilities that are empty or below stipulated filling levels to store its own purchases.

"Maybe some of the traders think, let's wait and see. Maybe if the government steps in, why should I book at least as much storage capacity as I used to book?" he said during a panel debate at the Flame conference in early May.

Italy, which has reserves around 41% full, approved a contract-for-difference mechanism offering shippers protection on the price of the gas they buy to inject into storage. The country has struggled to attract gas in long-term storage auctions.

"We have seen evidence of low take-up in storage auctions, with repeated minimum uptake at, for example, Stogit gas storage capacity auctions in Italy as a result of the current backwardation on the curve," Izbicki said.