From Luxembourg to New Zealand, global house prices have been surging as pandemic stimulus and a shift to work from home added fuel to a multi-year boom, driven by historically low interest rates.

But whereas authorities from Auckland to Stockholm have shown they can pull monetary and regulatory levers to tame property prices, the euro zone's fragmentation into 19 national markets means the European Central Bank's hands are tied.

Five of the ten countries worldwide that experienced the biggest increase in house prices in 2020 were in the euro zone, according to International Monetary Fund data.

This is raising concerns at the ECB about a new housing bubble that could wreak economic and financial havoc just as memories of the 2008 crash start to fade.

But the ECB cannot jack up interest rates too fast or far to help some euro zone members because it would hammer the most indebted euro zone countries, such as Italy and Greece, and the central bank is keen to avoid another debt crisis.

Instead, it must rely on often reluctant governments to cool off property markets with so called macro-prudential tools, which also have the benefit of targeting real estate directly rather than the economy at large.

They range from making banks build up extra capital when they make home loans to introducing deeply unpopular caps on the size of mortgages based on the purchase price or the income of the buyer.

"Especially in the euro zone, with one rate for different countries, macro-prudential tools are much better suited to fighting housing bubbles," said Grégory Claeys, a senior fellow at the Bruegel think-tank.

The trouble is the ECB cannot apply these brakes directly and can only issue warnings and recommendations via the European Systemic Risk Board (ESRB), the European Union's financial stability watchdog.

In the latest such move, the ESRB — which is based inside the ECB and headed by Christine Lagarde — urged Germany and Austria to impose limits on mortgages and raise capital demands for banks.

But its prescriptions are not binding. Germany's finance minister, for example, pushed back on the recommendation to introduce a loan-to-value ratio for home buyers. 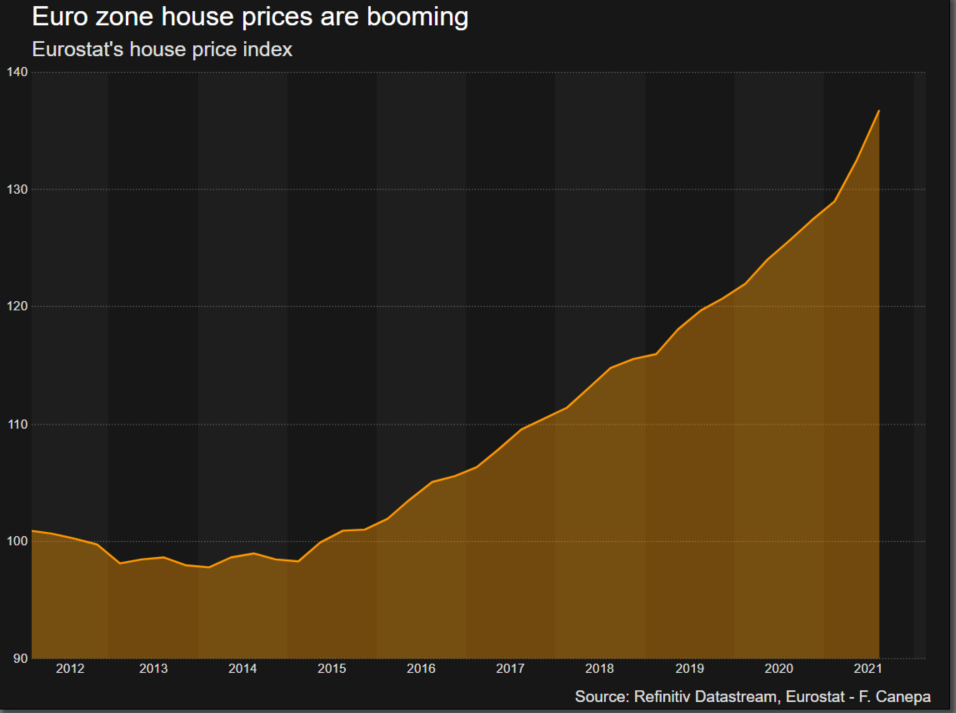 History shows this type of regulation can work.

South Korean authorities were able to slow down house price growth by imposing a debt-to-income ratio in the early 2000s.

And Sweden briefly managed to bring down the cost of a dwelling in 2018 by demanding that homeowners repay at least 1% of their loan balance every year if they took mortgages greater than 4.5 times their household income.

Yet it would also require some unpopular choices, like making mortgages all but unaffordable to poorer households.

This is why national regulators in the euro zone, who often include government officials who would pay the electoral price of public backlash, have been dragging their feet.

Germany for example has only just announced plans to apply some brakes, a decade after the start of its housing boom and with house prices already 20% to 35% over-valued according to the Bundesbank.

The ESRB said this month that Finland and the Netherlands were not doing enough to curb mortgage lending despite its recommendations.

"There's no cost for a politician for not acting," Bruegel's Claeys said. "We need an independent financial stability council that can bite." 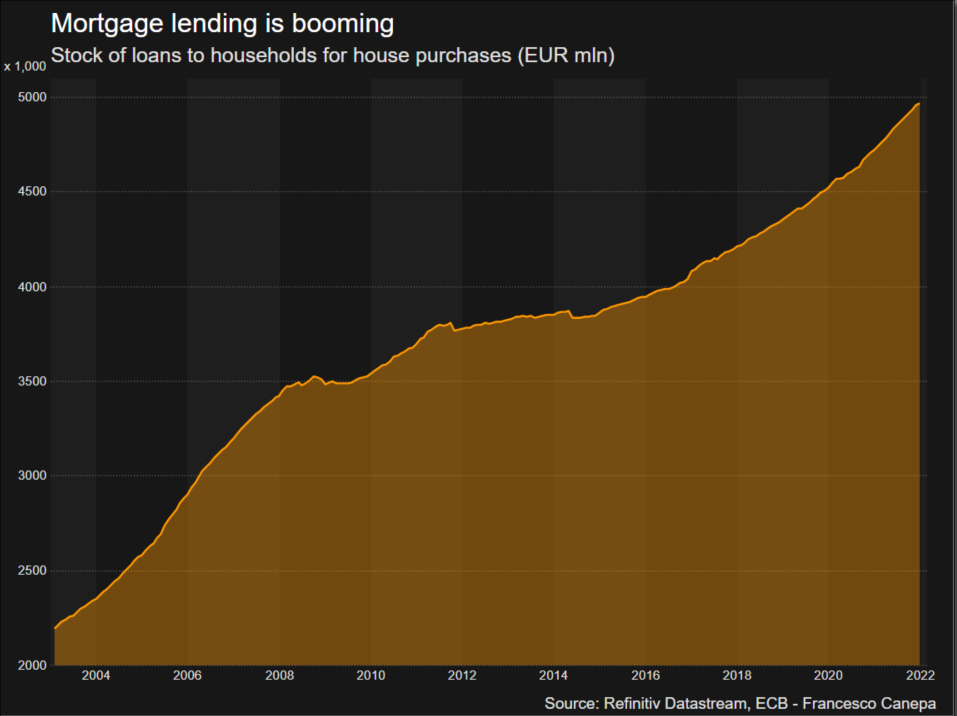 Yet research shows monetary policy still matters and can either make macro-prudential regulation more effective if it supports it or it can trump if it works in the opposite direction.

That could be the case in the euro zone, some economists say, doubting regulation will make much of a difference as long as mortgage rates remain below inflation, making property investments appealing for households and professional investors alike.

Borrowers were locking in an annual mortgage interest rate of just 1.3% for 10 years in December, according to the latest ECB data, compared to an expected inflation rate of just under 2% over that period.

Commerzbank's Kraemer is one of many economists who expect these negative real yields to persist, blunting the effect of regulatory curbs.

"When rates are too low, it's an uphill struggle," he said.

Ireland is a case in point.

Home prices there rose by 14.4% last year despite tough limits introduced in 2015, which cap mortgages at 3.5 times a borrower's gross annual income.

With that in mind, some ECB policymakers suggest the central bank should give house prices greater weight when estimating inflation and setting interest rates, as is done in New Zealand. 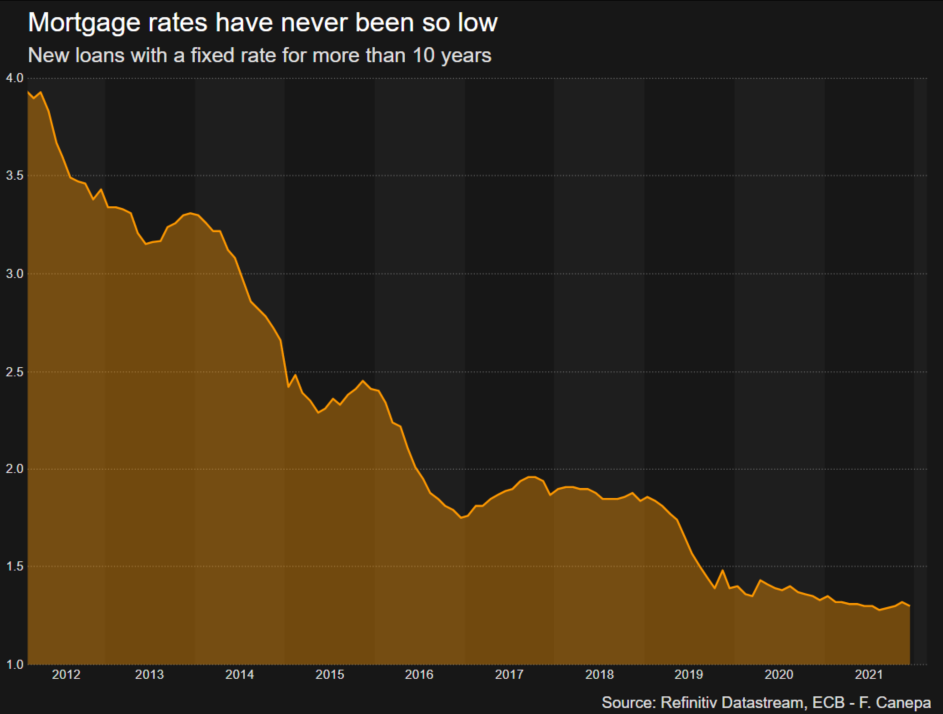