Surging oil and gas prices in 2021 delivered billions of dollars in profits to top oil companies, in stark contrast to the previous year when energy prices collapsed as the coronavirus pandemic hit travel and economic activity.

Typically, companies would invest the lion's share of that cash in long-term projects to boost oil and gas production and reserves after the previous year's deep cuts.

But unlike any other time in their history, BP, Royal Dutch Shell, TotalEnergies, Equinor, and Italy's Eni are focusing on returning as much cash as possible to shareholders to keep them sweet as they begin a risky shift towards low-carbon and renewable energy.

"All of the large oil companies are managing decline to a degree" by shifting to fields that provide larger investment returns for shareholders and leaving more mature assets behind, said Ben Cook, portfolio manager with BP Capital Fund Advisors.

The growing pressure from investors, activists, and governments to tackle climate change means that European oil giants are turning off the taps on spending on oil even as the outlook for prices and demand remains robust.

The two-pronged strategy of reducing oil output and boosting shareholder returns was underscored when Shell sold its Permian shale oil business in the United States for $9.5 billion in September, promising to return $7 billion to investors.

Investors in US companies can also expect their payouts to rise to record amounts, but Exxon Mobil and Chevron, the top US oil and gas companies, plan to continue ploughing money into new oil projects, encouraged by White House calls for more oil output to tackle high energy prices and inflation.

In 2022, European firms are set to return to investors a record $54 billion in dividends and share buybacks, according to analysis by Bernstein, while Exxon and Chevron are set to pay more than $30 billion combined. 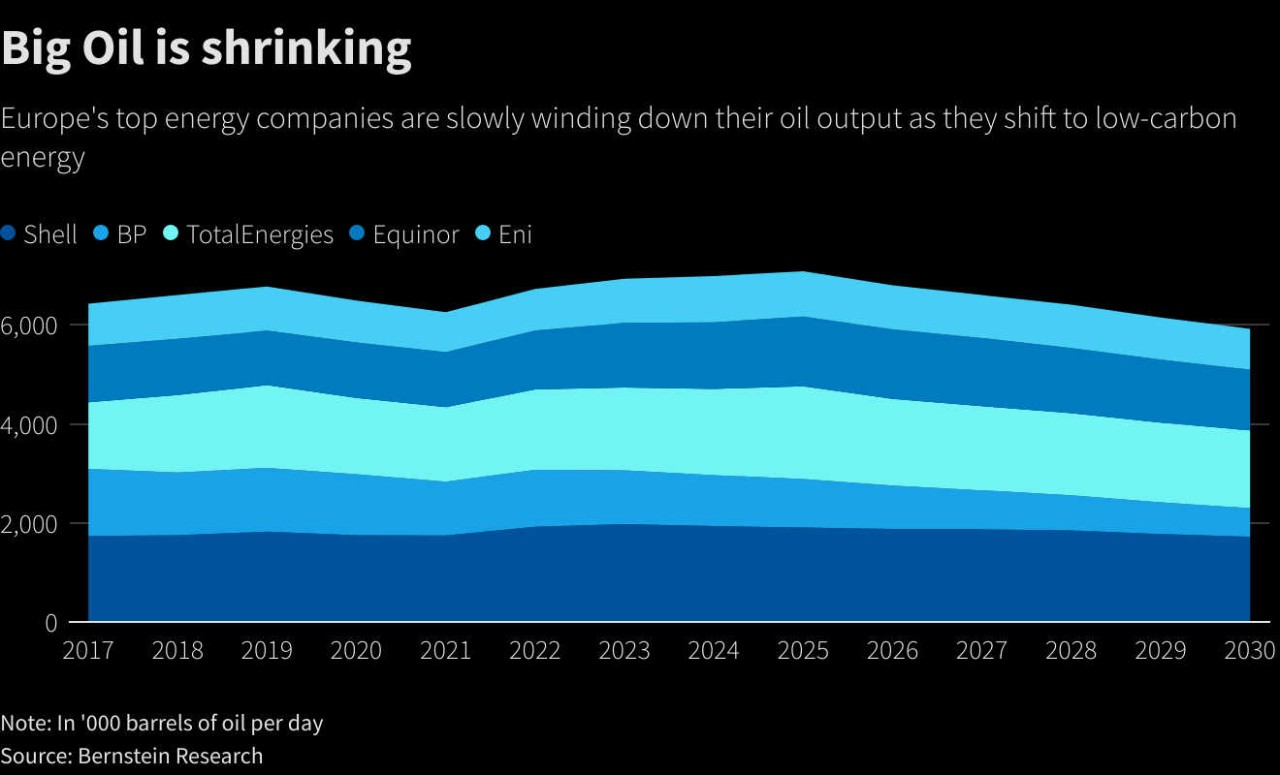 As investments in new oil projects dwindle, oil production by Europe's top five energy companies is set to drop by over 15% to below 6 million barrels per day (bpd) by 2030 after reaching a peak of around 7 million bpd in 2025, data from Bernstein Research showed. 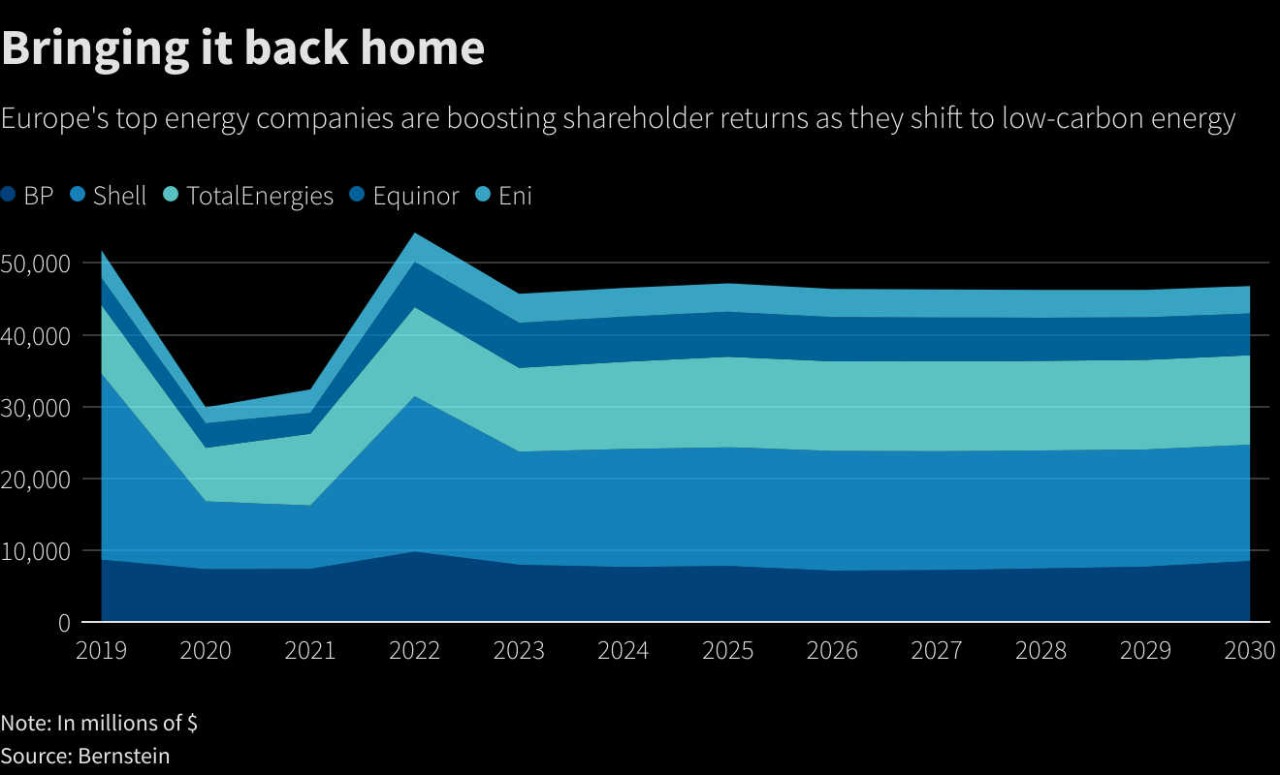 With the energy transition entering full swing, investors have welcomed the renewed focus on their returns. Having trailblazed oil and gas extraction for over a century, from drilling in the Middle East to pioneering deepwater production, oil majors have a history of pouring billions of dollars into huge, complex projects that ran over budget and behind schedule, leading to a decade of poor returns after 2010.

"Strategies for the energy transition are becoming more defined, but investors won't buy a story, given the failures of the past, so the companies will need to prove they can deliver on these strategies effectively and profitably," said Alasdair McKinnon of the Scottish Investment Trust.

Some oil will remain a key fuel in the energy transition, and natural gas output is set to increase as countries such as India and China look to substitute gas for the most polluting fossil fuel — coal.

At the same time, European oil majors are diverting spending to renewables such as wind and solar power, promising that returns from their low-carbon businesses will match or even grow beyond those of oil and gas in the long run.

That is in contrast to US companies, where Exxon and Chevron have largely stayed away from renewables. Chevron Chief Executive Mike Wirth has said renewables "don't generate the double-digit returns that investors want."

The sharp drop already seen in investments in new oil developments by European companies in recent years has helped push long-term oil prices higher on the expectation of supply falling short of demand.

"Such caution could underpin hydrocarbon prices, since energy demand looks set to continue to grow ... and supply could be restrained, especially as renewable and alternative sources of power do not yet look ready to take up the baseload slack," said Russ Mould, investment director at online platform AJ Bell.

Demand for oil is expected to peak around 2030, according to the US Energy Information Administration.

"Oil executives are aware of public pressure, their environmental responsibilities, and the opprobrium that any major new work could bring," Mould said, adding that companies will resist the temptation to ramp production back up.

Shell Chief Executive Ben van Beurden said the company is looking longer term and, while it wants to enjoy the strong oil prices, "we are not minded to invest in a big way in a rising market because we believe that by the time we can start to harvest it, we will be beyond that peak again."

"It is hard to say who is right in the pace of the transition. Time will tell if Europe went too fast."