For global financial markets, the second year of the COVID pandemic was nearly as dramatic as the first.

On top of all that, Turkey exited 2021 in currency chaos, bitcoin and other cryptocurrencies crushed it, small-time traders gave some hedge funds a drubbing, and though green has gone mainstream, dirty oil and gas were the big winners, up about 50% and 48%, respectively.

Stocks till you drop

MSCI's 50-country world index added more than $10 trillion, or 20%, thanks to COVID-19 recovery signs and the torrent of central bank stimulus that continued to flow. The S&P 500 gained 27%, while the tech-heavy Nasdaq was up 22%.

European banks had their best year in over a decade with a 34% gain, but emerging market equities lost a woeful 5%, led by a 30% plunge in Hong Kong-listed Chinese tech hit by Beijing's moves to limit their influence.

"We think US equities are absolutely bonkers," said Tommy Garvey, a member of asset manager GMO's asset allocation team, adding that valuations in most other parts of the world were also expensive. 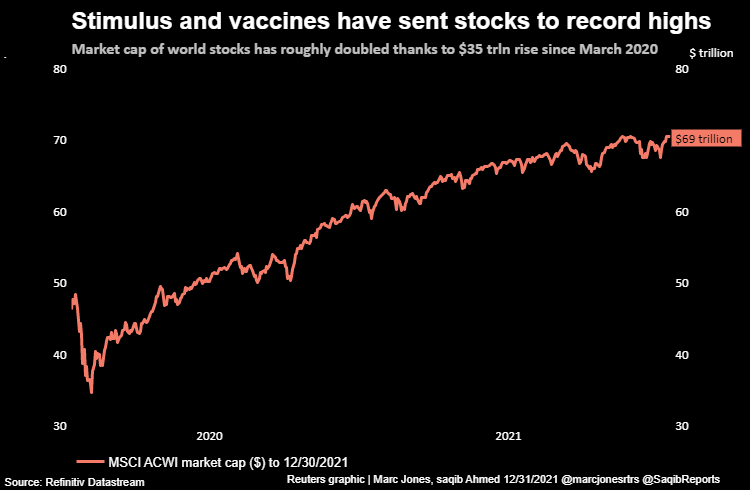 Commodity markets had a blinder as the world's big resource-hungry economies have tried to get back to some kind of normal. Respective 50% and 48% gains for oil and natural gas were their best in five years and left prices well above pre-pandemic levels.

Key industrial metal copper hit a record high back in April and jumped nearly 25% for the second year in row. Zinc saw a similar gain, while aluminium made about 40% in its best year since 2009.

Precious metal gold dipped, but the agri-markets blossomed with corn up by nearly 25%, sugar up 22%, and coffee up 70%. 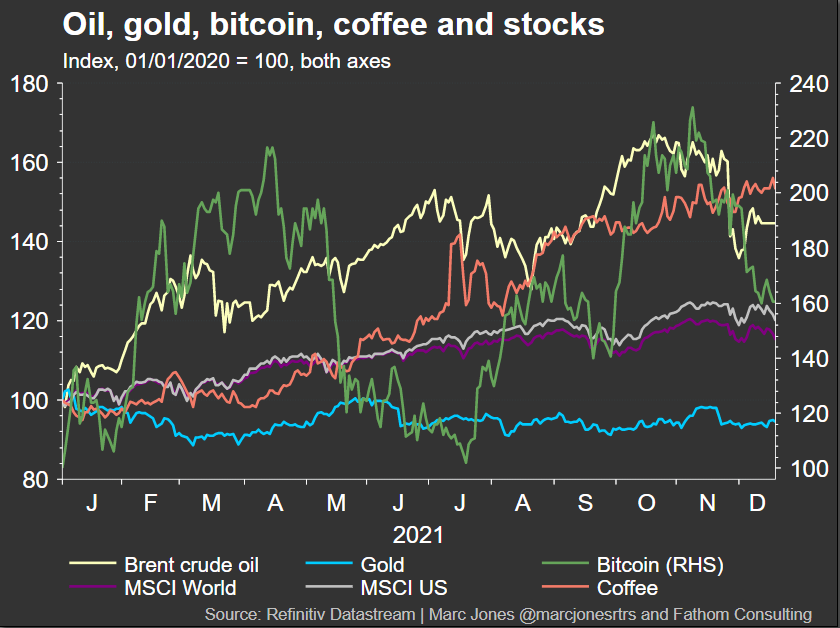 Bears in the China shop

China's crackdown on its big online firms, combined with a property sector crisis, wiped over a trillion dollars off its markets this year.

Alibaba, China's equivalent to Amazon, tumbled nearly 50%. The golden dragon index of US-listed Chinese stocks is down 42%, while homebuilder Evergrande has just become its biggest-ever default.

"If home sales keep dropping at the rate they are at the moment, you could easily shave another 1% off of (Chinese) GDP," cautioned AXA Investment Managers' Head of Active Emerging Markets Fixed Income, Sailesh Lad. 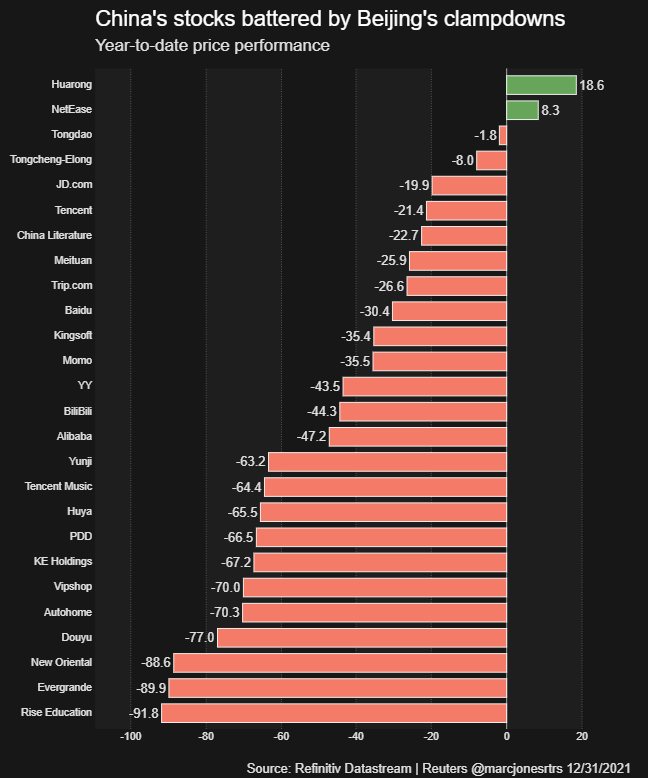 No time to buy

Booming inflation and big central banks starting to turn off the money taps made it a difficult year for bond markets.

US Treasuries — the global benchmark for government debt investors — delivered a loss of around 3%, their first red result since 2013, while German Bunds were down around 9% as of 22 December.

On the positive side, the most risky band of corporate junk bonds — those rated CCC and below — made around 10% in both the US and Europe.

Tesla, doyen of the electric car sector, recovered from a skid early in the year. But other funds or stocks linked to innovation — such as the ARK Innovation Fund and some solar energy stocks, BioTech shares, and special-purpose acquisition companies or SPACs — were down 20% to 30%. 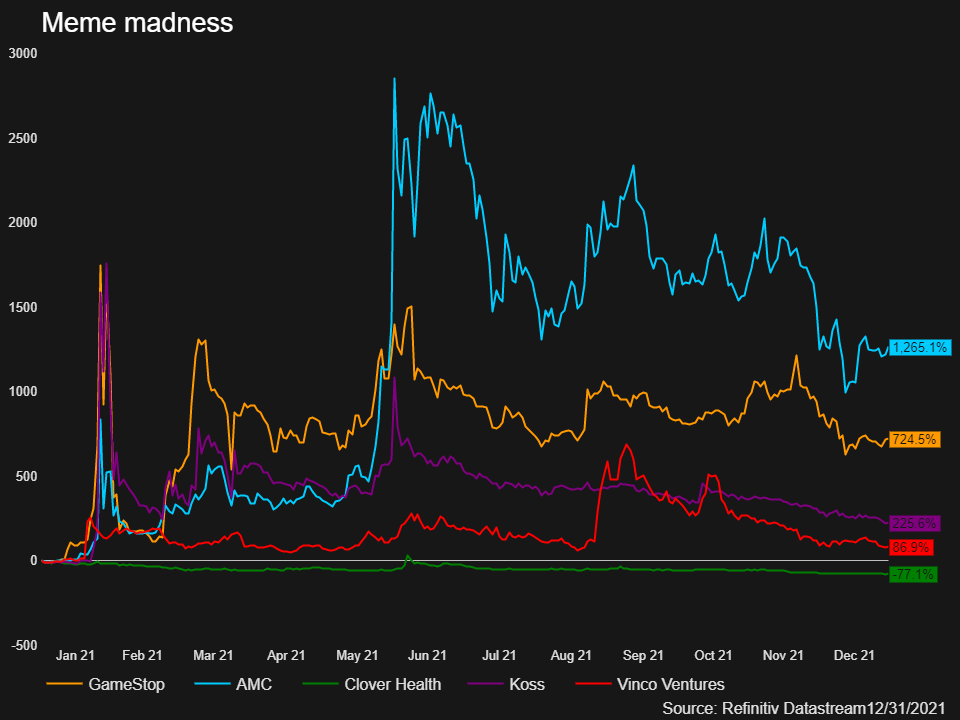 Turkish lira slumps are hardly rare these days, but last year's blow-up was spectacular even by its standards.

Things started to turn ugly in March when self-declared enemy of interest rates, President Tayyip Erdogan, replaced another central bank governor. But it has gotten worse since his new head of the bank started slashing rates in September.

Despite a modest bounce after the government sketched out an unorthodox plan to limit the pain, the lira was still down over 40% for the year and the government's bonds have been hammered. 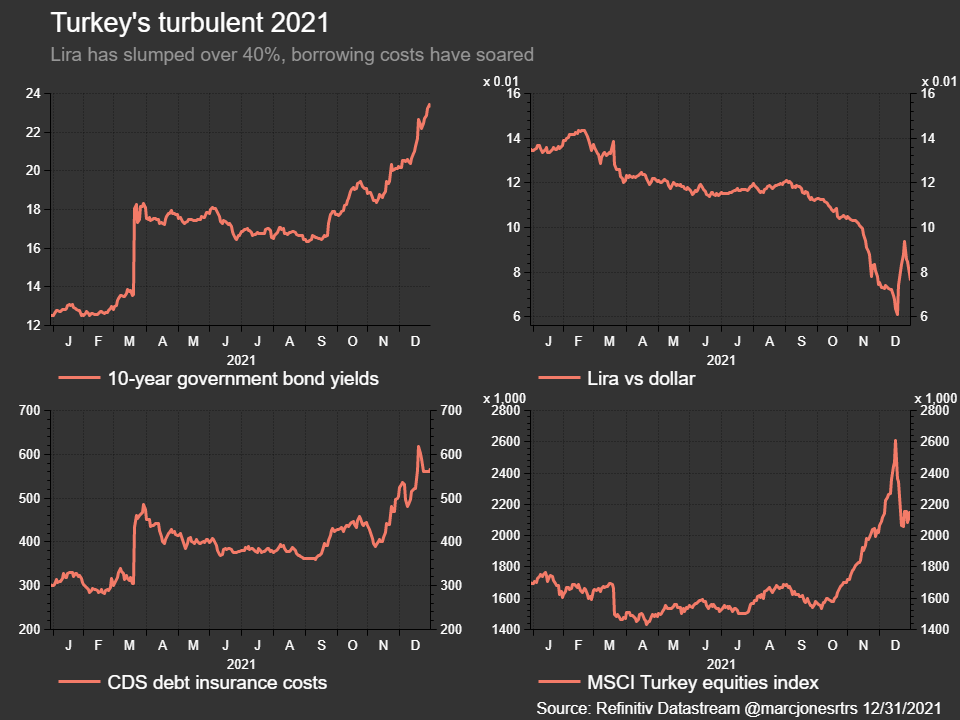 A surge in inflation became a major concern for investors in 2021 as the pandemic disrupted the global supply chain and made it difficult to meet demand for everything from microchips to potato chips.

With US inflation ramping to its highest since the 1980s, the US Federal Reserve announced it will end its pandemic-era bond purchases sooner than previously expected, and the Bank of England became the first G7 central bank to hike interest rates since the COVID-19 outbreak.

Other major central banks are expected to follow in 2022, but some of the major emerging markets are already well advanced in the process. 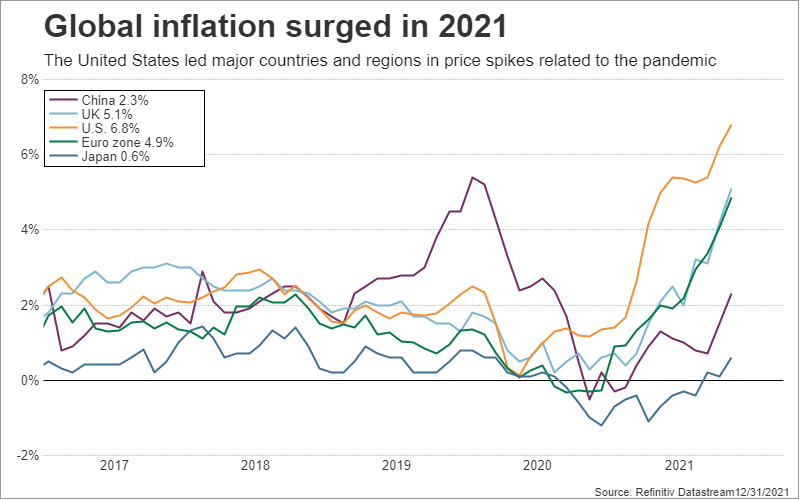 Investors had high hopes for emerging markets (EM) coming into 2021, but many have been disappointed.

China's struggles and the persistence of COVID-19 saw EM stocks lose 5%, which looks even worse when compared with a 20% rise in the world index and the 27% leap on Wall Street.

"China was the huge story of the year," said Jeff Grills, Aegon Asset Management's head of emerging markets debt, adding that 2022 was likely to be all about how quickly and far interest rates rise and how growth holds up. 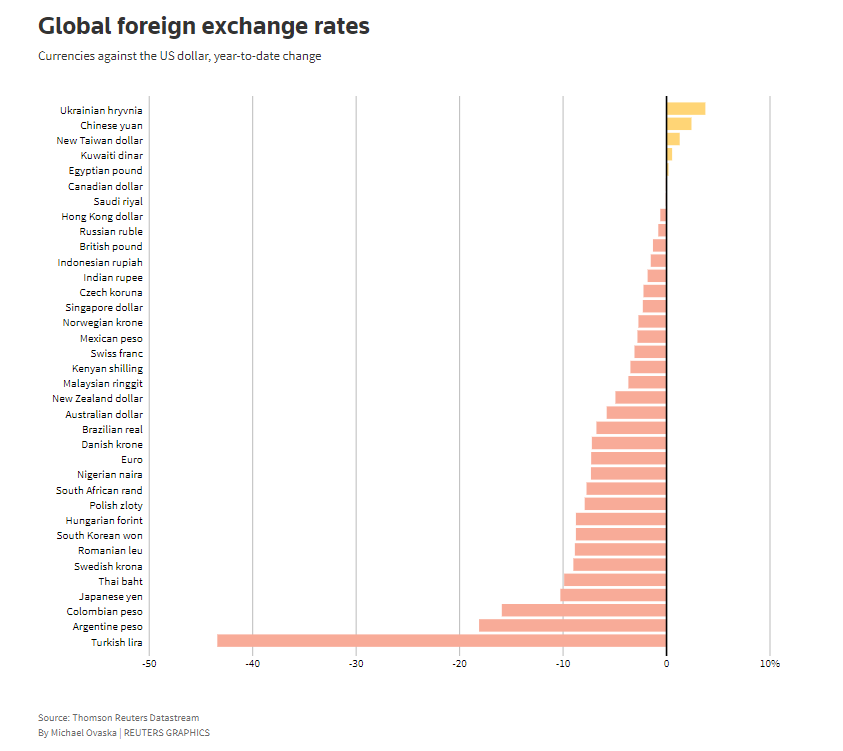 Bitcoin at nearly $70,000; "memecoins" worth billions of dollars; a blockbuster Wall Street listing; and a sweeping Chinese crackdown: 2021 was the wildest yet for cryptocurrencies, even by the sector's freewheeling standards.

Bitcoin's near 60% jump may look paltry compared with 2020's 300% rise, but that has come despite a Chinese crackdown in May that saw it nearly halve in price.

Dogecoin, a digital token launched in 2013 as a joke bitcoin spin-off, soared over 12,000% from the start of the year to an all-time high in May — before slumping about 80% by mid-December.

Nonfungible tokens (NFTs) — strings of code stored on the blockchain that represent unique ownership of digital art, videos, or even tweets — also exploded in the mainstream. A digital collage by US artist Beeple sold for nearly $70 million at Christie's in May, making it one of the top three most expensive pieces by a living artist ever sold at auction. 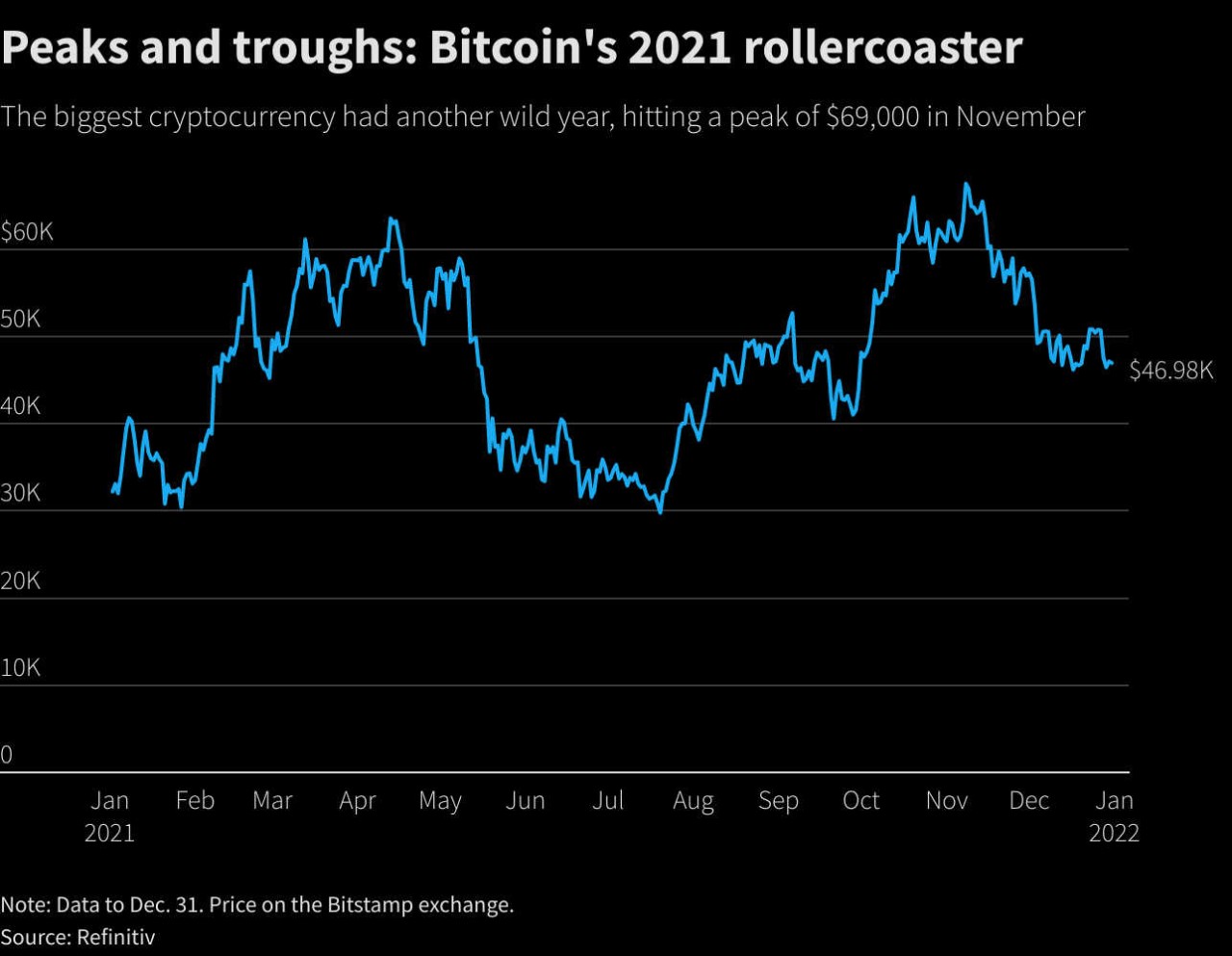 The dream to go green remained front and centre in 2021. Green bond issuance notched yet another record year, at nearly half a trillion dollars.

The "ESG" version of MSCI's flagship world stocks index was up more than 2 percentage points higher than the standard version, while China's most environmentally friendly stocks index surged more than 45% even as other sectors there crumpled.