The arrival of vaccines and a nascent economic recovery boosted the outlook of finance leaders, whose confidence drew closer to pre-pandemic levels in the first-quarter AICPA Business & Industry Economic Outlook Survey.

The survey’s CPA Outlook Index (CPAOI) rose six points to 68 out of 100, boosted in part by finance decision-makers’ optimism about revenue and profit for the coming 12 months. The nine-component index peaked at 81 in the first quarter of 2018 and had remained in the 70s until the second quarter of last year, when it dropped from 76 to 38. A reading above 50 reflects positive sentiment.

This quarter’s survey, conducted in February, included 693 responses from CPA decision-makers such as CFOs, CEOs, and controllers. It was the third consecutive quarter in which sentiment rose.

About 47% of respondents were optimistic about the year ahead for the US economy, and 27% said their expectations were neutral. Those were the strongest numbers since a year ago, approaching the figures seen throughout 2018 and 2019.

“I think it’s just going to continue to grow. I have a lot of activity in my pipeline,” said Carolyn Chasteen, CPA, CGMA, the owner of Velosio Denver. The company sells and supports Microsoft enterprise software for residential construction companies.

“Everybody wants to move out of the city and into a house,” she said.

Chasteen expects housing markets to stay hot as employees settle into remote work. Indeed, 21% of survey respondents said their business planned to shrink its office footprint, even though 58% expected their business to expand.

But expectations differed greatly across industries as the outbreak continued to limit public activities and travel.

“I guess I’m more pessimistic than anything,” said Holly Maloney, CPA, CGMA, the CFO for an events rental business in Canton, Ohio.

The business, Canton Chair Rental, saw a 50% decline in gross receipts in 2020. With weddings and trade shows cancelled, the company subsisted by renting tents to hospitals and other facilities that needed outdoor facilities, and with a US Paycheck Protection Program loan.

Now, Maloney worries that the pandemic will once again shut down events throughout the upcoming busy season.

“Our events may not come back totally. There’s revenue gone that we need to get through next winter,” she said.

Even a fast reopening might not solve the problem, she added. Labour markets have been surprisingly tight for in-person and relatively low-wage jobs like the ones that Canton Chair Rental relies on to manage and deliver its huge inventory of event supplies.

“If they do come back and people just go crazy [with events],” Maloney said, “am I going to be able to get the people I need to hire to provide those services?”

Forty-four per cent of respondents were worried about inflation, a sharp increase from the fourth quarter of 2020, when 24% had that concern. Labour costs were the most common inflation risk factor. The possibility of a minimum wage increase could make that even more complicated, Maloney added.

Meanwhile, some organisations are wondering how the pandemic has altered their trajectory in the years to come. Nearly half of respondents reported a moderate or severe negative impact from the pandemic.

Jill Berkemeier, CPA, CGMA, is the CFO and vice-president of administration for the Cincinnati Museum Center. The not-for-profit traces its roots back more than 200 years, and Berkemeier is confident that the cultural institution will survive the pandemic — but the question is how long the hangover will last.

“We have a long legacy,” she said. “We’re doing everything we can to minimise the long-term impact.”

Like other venues, the centre faced an extreme drop-off in revenue due to public health restrictions. Berkemeier said the museum reduced staffing costs 40% by eliminating 175 positions and cutting pay across the organisation.

“We eliminated any nonessential spending, and we’re still losing millions,” Berkemeier said. “We’re doing everything we can to minimise the blood loss.”

The museum has been buoyed by a PPP loan. Donors have stepped up, and Berkemeier is hoping for a Shuttered Venue Operators grant from the recent federal stimulus package, which was passed by the US House of Representatives but must still pass the US Senate. She’s still expecting a $3 million loss for this fiscal year and a loss of perhaps $20 million in earned revenue overall.

Before the pandemic hit, the not-for-profit was celebrating the recent completion of a $244 million restoration of its campus, the historic Cincinnati Union Terminal. Now, Berkemeier’s biggest concerns are about how much debt and how much money from the endowment it will take to survive.

She expects the rebound could take up to three years.

“The fact that there’s a vaccine and we have some target dates to plan for the future is helpful,” Berkemeier said. “That’s something that we haven’t had for a year. There’s been so many unknowns.”

Across the country, the profound shifts caused by the pandemic and the US election have made it hard to predict what’s next.

In Washington, D.C., Carolyn Mollen, CPA, is vice-president for finance and administration for the not-for-profit Resources for the Future, which conducts nonpartisan research on the environment and energy. President Joe Biden’s administration is likely to bring new money and support for renewable energy and climate change mitigation, but Mollen isn’t counting on that yet.

“It’s a really interesting conundrum. We’re having to do a lot more scenario planning. We feel this optimism and this potential, especially for our organisation and our industry. But it’s not realised potential yet,” she said, adding that she was not speaking on behalf of her employer.

Mollen hopes the pandemic has led to a new realisation: Its unprecedented nature has forced people to think about other global threats, such as climate change.

“It put a renewed focus on why we need to focus on these things ahead of time,” Mollen said. “The disruption of COVID caused us all to realise that things can really shift.” 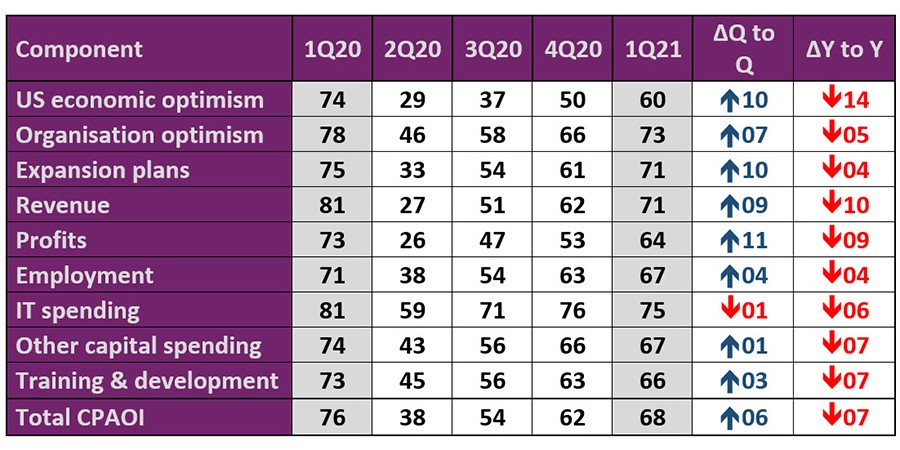 — Andrew Kenney is a freelance writer based in the US. To comment on this article or to suggest an idea for another article, contact Neil Amato, an FM magazine senior editor, at Neil.Amato@aicpa-cima.com.