The economic outlook of financial executives in the US continued to soften slightly in the fourth quarter amid faltering confidence in the domestic economy, according to the Business & Industry Economic Outlook Survey released Thursday by the Association of International Certified Professional Accountants.

The survey's CPA Outlook Index (CPAOI) dipped by one point to 74, its second consecutive quarterly decline, but remained firmly in positive territory. The decline was caused in large part by a sharp drop in overall US economic optimism, which hit its lowest level since a year ago. The index is made up of nine equally weighted components; a reading above 50 indicates positive sentiment.

Leaders remained significantly more confident in their own organisations than in the domestic and global economy, but some said the path ahead is uncertain.

"I thought 2021 was going to be my most difficult year ever to budget for. Then we got to 2022," said Mellissa Reed, CPA, chief business officer and senior vice-president for the Akron Zoo.

She is "cautiously optimistic" about the future, especially since the Ohio zoo's attendance levels have recovered to pre-pandemic levels since occupancy restrictions were lifted in June. But Reed said rising labour costs and the ongoing pandemic make planning difficult.

"Right now, everything is just so up-and-down — there are no trends that we can base decisions off of," she said.

For example, attendance could be driven down again by new COVID-19 variants and related restrictions. And even as she tries to budget conservatively, Reed has to worry about labour costs for the park's seasonal positions. The zoo is competing for employees with online retail giants that can pay $15 an hour for starting positions at local warehouses.

More than half of respondents reported moderate or extreme difficulty with recruiting and retention. And entry-level jobs were rated, by far, the most difficult positions to fill. Availability of skilled personnel was the second-most cited challenge in the survey. The struggle to fill jobs has led to a continued rise (six consecutive quarterly increases) in projected costs for salary and employee benefits. For the next 12 months, respondents expect those costs to rise 4.3%, the highest survey reading since at least 2009.

Thirty-nine per cent of respondents say their organisations have too few employees and plan to hire in the next year, and 15% say they don't have enough staff but are hesitant to hire. Those numbers are about the same as the previous quarter.

In the Pacific Northwest, Oregon Fruit Products is struggling to recruit its seasonal workforce.

"We're trying to find creative ways to cover the workforce," said Tom Christensen, CPA, the organisation's CFO. The company processes fruit and sells products in the retail, food service, and ingredients markets, including to beer brewers.

To staff up for its busy seasons, the company has allowed more flexible schedules for its temporary workers, such as a four-hour shift on three days each week.

"We're trying to dip into more of the workforce that doesn't necessarily want to work an eight-hour day, five days a week," Christensen said.

But the company's greatest challenge, he said, is the supply chain.

"It's across the board, and every week it's something different," he said. The shortages range from materials for packaging and bottles to the fruit itself.

At the same time, a shipping crunch has made it more difficult to import fruit from the South American market. At times, the company has been forced to take maritime shipments at distant ports such as in Southern California or even Florida.

All that is driving higher costs and prices, major components for inflation.

In the survey, 88% of respondents cited inflation concerns. It was the first time in years that inflation was rated the top challenge for organisations. Labor costs remained the most commonly cited inflationary risk factor, followed by raw material costs.

The Akron Zoo has seen especially sharp cost increases for its construction projects, such as building new animal habitats. The price of lumber and steel has doubled or tripled compared with expectations.

"Prices are just fluctuating out of control," Reed said.

Those rising costs might be eating into companies' expected profits. The survey found that finance leaders expected revenue to grow by 4.7% in the year ahead — but the expected growth rate for profits dropped to 2.1% from 2.5% in the third quarter and 4% in the second quarter.

The upcoming year "looks to be a strong growth year for our company and for our customers in multi-family real estate and construction," said Amy Alost, CPA, the CFO of Integris Solutions, a Dallas-based provider of lighting products for multi-family construction projects.

Alost said she is likely more bullish than others because of strong demand that she does not see slowing down.

"Yes, costs are rising. Yes, everyone is trying to mitigate those impacts for companies, for consumers, to the extent that we can do so," Alost said. "These challenges are bringing about new opportunities with new business partners, new lines of business, new team members, and new enabling technologies."

Christensen, of the Oregon Fruit Company, said he remained "neutral, or maybe slightly positive." With nearly 90 years in business, the organisation has benefited during this tumultuous time from long-standing relationships with suppliers and customers, he said.

Reed, of the Akron Zoo, thinks it could take three to five years before the economy stabilises into a more predictable state. For now, the zoo is holding on to that cautious optimism — but it's making contingency plans in preparation for the next crisis. 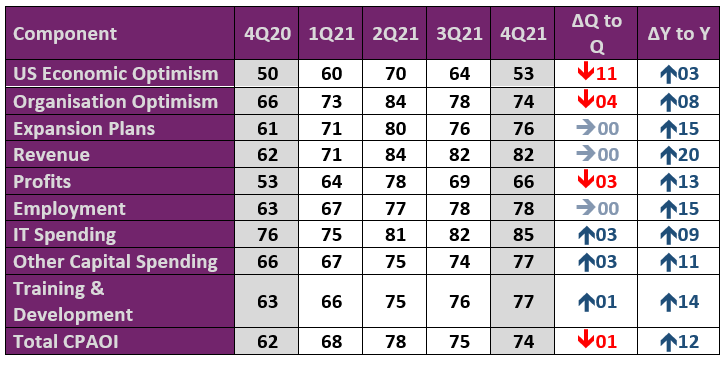 The survey measured the sentiment of high-ranking finance professionals in business and industry in nine areas: US economic optimism, organisation optimism, expansion plans, revenue, profits, employment, IT spending, training and development, and other capital spending.

— Andrew Kenney is a freelance writer based in the US. To comment on this article or to suggest an idea for another article, contact Neil Amato, an FM magazine senior editor, at Neil.Amato@aicpa-cima.com.