Global dividends are forecast to rise to $1.39 trillion this year, up slightly from a previous estimate to reflect a stronger-than-expected recovery in the company payouts, Janus Henderson said in a report published on Monday.

Its latest estimate, up 2.2 percentage points from an earlier one, is just 3% below the pre-pandemic peak.

Dividends, a company payout to shareholders, slumped last year against the backdrop of the COVID-19 crisis as regulatory constraints and government pressures to restrict payments weighed.

But a strong recovery is currently underway, with headline growth at 26.3% in the second quarter, data from the investment manager's Global Dividend Index showed.

Underlying growth — adjusted for special dividends, changes in currency, timing effects, and index changes — was 11.2%. On a year-on-year basis, 2021 growth is expected at 10.7%, equivalent to an underlying rebound of 8.5%. 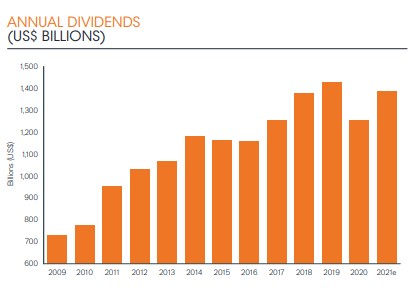 Dividends from companies restarting payments totalled $33.3 billion and accounted for three-quarters of the underlying growth in the second quarter, the report said.

"Global dividends in aggregate will likely regain their pre-pandemic levels within the next 12 months," Jane Shoemake, client portfolio manager on the global equity income team at Janus Henderson, said in a statement.

The current "recovery will not be hampered by a weak banking system as it was after the global financial crisis a decade ago”, as policymakers continue to provide fiscal and monetary support to the economy, she added.

Limits on bank dividends had a significant impact in 2020 as lenders accounted for half of the fall in global payouts, but constraints have since been lifting.

In early August, European banks announced billions of euros in payments to shareholders. These included ING Groep NV and Intesa Sanpaolo, whose interim dividend will be subject to discussions with regulators.

EU banks meanwhile have benefited from a strong performance in stress tests by the region's banking watchdog.

Among UK banks, HSBC reinstated dividend payments flagging higher payouts in the future, after the Bank of England scrapped its remaining pandemic curbs in mid-July.

Europe is staging a solid rebound after a wave of cancellations and suspensions last year.

At the same time, companies continued their payouts during the first year of the pandemic in the US and in Canada, the Janus Henderson report said. 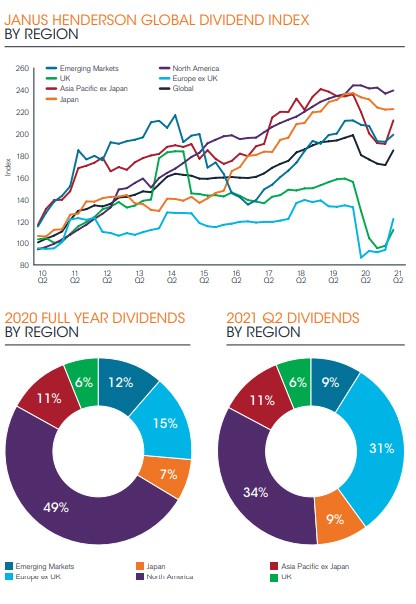