My father, Robert Hutton, flight sergeant and later flight lieutenant, studied for the Institute’s exams whilst a POW in Germany during World War II. He was one of a number of CIMA students mentioned in the FM December 2019 article “Resilience: Institute Students as POWs in Germany”. This is a follow-up to that article and in honour of the 75th anniversary of VE Day on 8 May 1945, which marked the end of World War II in Europe. Based on a still existing logbook or diary my father wrote as a POW, this is a story of bravery and fortitude under the toughest of conditions.

Hutton’s plane, a Wellington bomber of 466 Squadron of the Royal Australian Air Force (RAAF) in which he was the navigator, was shot down over Essen, Germany, on 30 May 1943 whilst on a mission for the Battle of the Ruhr (bombing German industrial sites). Hutton parachuted out and spent two days and nights dodging German patrols and attempting to reach Belgium, whilst existing on rations of Horlicks tablets, a bottle of water, and five cigarettes, which were considered essential to survival at the time. He had to give himself up just 8 kilometres from the Belgian border when hunger, diarrhoea, and an injured left foot without a boot meant he was unable to carry on. He was arrested and would only state his service number to the interrogating officer who then asked if he wanted to be “shot or hung” — “Shot, sir” was his swift reply. He was sent to POW camp Stalag Luft VI near the town of Heydekrug (now Šilutė in Lithuania) and arrived there on 11 June 1943.

Life in the Stalag was, he said, “tolerable”. There was a general lack of food, and the food that was provided was of poor quality. POWs were limited to a cold shower once a week, and there was a shortage of coal for the fire for cooking and warmth. Nonetheless, Hutton’s log for the rest of 1943 is mostly positive. Everyone knew how fortunate they were to be alive, so there was a general determination to blot out the deprivations of camp life by concentrating their efforts on diversionary activities. He tells of the films they watched and the escape tunnels they dug, most of which were discovered, resulting in searches of the accommodation huts and sessions in the “cooler”. The cooler was meant to be punishment by solitary confinement but was rarely that due to the intervention of other POWs. The supports required for the tunnel walls came from their bed boards. Every man gave up all but three of his bed boards leaving just one each for the head, the backside, and the feet. Needless to say, a good night’s sleep was never possible, and Hutton wasn’t the only one to suffer a permanent back problem.

A lack of textbooks

Hutton started studying for the CIMA — then the Institute of Cost and Works Accountants (ICWA) — Intermediate Part I examination on 14 July 1943 but “not particularly seriously due to lack of textbooks”. Incredibly, he passed this exam in December 1943. He was relieved to get a letter that month indicating that everyone at home knew he was still alive.

Christmas 1943 arrived and Robert reported that they “made a cake”, a choir was formed, and they had a service on Christmas Eve. There was a “terrific blizzard” resulting in snow 4 to 5 feet deep in parts. However, Cinderella was performed, and there was a celebration for a 29th and a 21st birthday. A “celebration” would include a “brew” — of boot leather held in hot water — and some concoction of food from the meagre supplies saved from their eagerly awaited Red Cross parcels.

By February 1944 Hutton was feeling the tensions of camp life and finding that studying for his ICWA Intermediate Part II exam was taking “more concentration than I have the power to give”. His log states he took these exams on 4 April 1944, although CIMA has no record of this — some camps didn’t return the papers for marking, or he may have failed the exam, which wouldn’t have been recorded.

On 11 May 1944, his 27th birthday, Hutton received notification of his promotion to flying officer, and on 9 June 1944 he was moved to the Stalag Luft lll camp at Sagan, about 100 miles south of Berlin. An escape attempt, later portrayed in the film The Great Escape, had taken place some nine weeks earlier from this camp. Of the 76 men who had escaped, three made it back to Britain, 73 were recaptured, and 50 of those recaptured were executed.

Conditions at Stalag Luft III at Sagan were worse than in Hutton’s previous camp, Stalag Luft VI at Heydekrug. Sagan became overcrowded as more and more POWs arrived, coal was in short supply, and food was at quarter rations. Mention of the availability of food, or lack of it, featured heavily in Hutton’s log with welcome parcels from home and the Red Cross being mentioned from time to time. By December 1944 Hutton’s spirits were raised by the arrival of a food parcel, so the prisoners celebrated with a “stew” of two tins of potatoes and two tins of bread pudding. On 8 December Hutton tells of his pleasure at receiving a parcel containing half a pound of Capstan Flake tobacco, but he was most disappointed when, after waiting so long for textbooks, he got How to Draw Dogs.

Hutton’s next exam papers arrived on 4 January 1945. It’s not clear which paper this would have been, but he was destined to be unable to take it. The Russian forces were moving west and were just 20 kilometres from the camp in late January 1945, and food was becoming more and more scarce for the POWs and for the German people. His log states that they were all “feeling hungrier and hungrier” and that he was “feeling tired all the time” so noted that he would have to give up studying.

By 24 January 1945 Hutton had more or less given up on his exams, but on 25 January he was persuaded to give the exams a try — it would be a good dummy run, he thought. The exams were scheduled for Monday 29 to Wednesday 31 January 1945. However, on Sunday 28 January Hutton and the other POWs were told they were going on a “forced march”, so Hutton “chucked his books away and got weaving” in preparation for what was to come. He told of gathering up their few supplies onto a makeshift sleigh to drag with them as they walked.

The forced marches resulted in the deaths of many POWs, who were shot if they couldn’t continue walking. They were required to walk some 20–30 kilometres a day, sleeping wherever they could find some shelter — a haystack if they were lucky — for some 14 days, eventually arriving at Luckenwalde camp (Stalag IIIA) near Berlin.

Conditions in this camp were dire. The Allies flew over the camp daily on their way to bombing missions over nearby Berlin. The glow from the fires and the noise could be seen and heard from the camp. Food supplies had dwindled, and hunger was a constant complaint. Relief came when the Russians entered the camp on Sunday 22 April, bringing much needed food and a radio. The POWs were then free to leave the camp, but with sporadic fighting and general chaos outside the camp, Hutton waited for the Americans to arrive some weeks later.

Two years spent as a POW had taken its toll on his health, both mentally and physically. He’d lost a considerable amount of weight and was allocated extra food rations on his return. He suffered nightmares for many years. He went to live with friends in the Halifax/Bradford area of West Yorkshire in the UK and undertook various jobs, including selling soap from door to door for Reckitt and Colman and selling paint. He met Freda Cleasby in 1947, and they married three months later against her father’s wishes. He obtained work with Richard Johnson & Nephew Ltd in Manchester in the north of England, where Freda also worked, and later took a job with North Western Electricity Board in Stockport, Cheshire, in the UK. With her encouragement he resumed his accountancy studies.

Once married, with a family on the way and a mortgage to pay, Hutton had to study in the evenings after work, sitting at the kitchen table — he would fall asleep if left in peace in the front room with a fire. He passed the Intermediate exam in June 1950 and the Final exam in June 1954, becoming an associate member of the ICWA on 23 November 1954.

The family moved to Nottinghamshire in the UK’s East Midlands in 1955, and Hutton joined the National Coal Board (NCB) as an accountant with responsibility for a group of mines. By the early 1960s coal mining was declining in the Nottinghamshire/Derbyshire coalfield, and the NCB was providing computer services for local businesses. This was mainly a payroll service prior to computers becoming the desktop machines or mobile devices we know today. Hutton became the senior accountant at NCB computer centres in Staffordshire in the West Midlands and Nottinghamshire. Then in 1971 he returned to the North Western Electricity Board as senior accountant at its HQ in Blackburn, Lancashire, where he remained until retiring to Surrey in 1979.

Hutton was born to Fred and Florrie Hutton in Bolton, Lancashire, in May 1917, obtained a scholarship to Bradford Grammar School, and before the war worked in the offices of John Foster and Sons Ltd, manufacturers of quality worsted and mohair cloth at the Black Dyke Mills, Halifax, in West Yorkshire, now home to the world-famous Black Dyke Band.

After surviving the war, becoming a qualified management accountant, and having a successful career, he enjoyed a satisfying retirement — including attending a London memorial service for the 50 airmen from Stalag Luft lll killed during “Escape 200” and a celebration of the Battle of Britain at Westminster Abbey on 17 September 1995 with his two daughters and son. Hutton passed away peacefully on 28 November 1995. 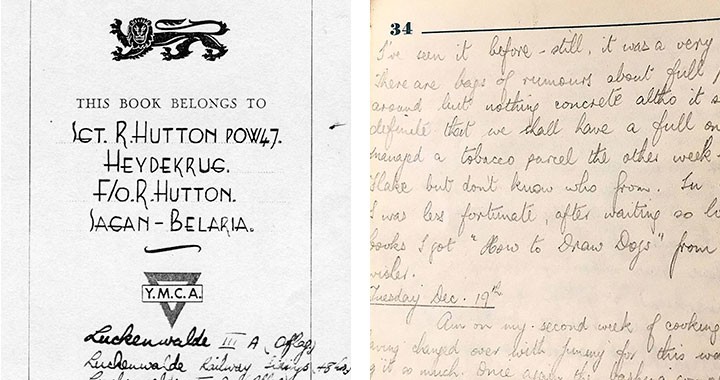 At left: The front page of Hutton’s YMCA logbook detailing the camps where he was a POW. At right: An excerpt from Hutton’s logbook that references his receiving a book titled “How to Draw Dogs” instead of the text books he had waited for.

Photos courtesy of the Hutton family

— Gillian Huddlestone is the daughter of Robert Hutton and a friend of former CIMA President Glynn Lowth, who knew Hutton well. To comment on this article or to suggest an idea for another article, contact Oliver Rowe, an FM magazine senior editor, at Oliver.Rowe@aicpa-cima.com.