Business dropped off when the coronavirus pandemic shut down the film industry, but Cinelab London, a film laboratory and post-production company, managed to stay open during the lockdown and made the best of it without endangering employees’ safety.

Measures put in place during the lockdown put the company in a strong position for when film shoots resume, suggested John Mahtani, ACMA, CGMA, a former executive at Warner Bros. Pictures who is Cinelab London’s co-founder and chief commercial officer. He said producers have indicated that may happen around September.

“It’s definitely been a challenging time, but because we acted quickly and took some really good decisions early on, I think we’ve done a pretty good job of steering the business in the right way,” Mahtani said.

Cinelab London began 2020 with confidence, aiming to build on the previous year’s growth. The company, set up in 2013 to serve film-makers that shoot on film rather than digital, had just had its best year so far, with an annual turnover of £3.1 million ($3.9 million).

The range of projects the team worked on in 2019 included episodics (long-form series such as the HBO drama Succession), 500 commercials, a couple of hundred music videos, branded entertainment, and about 20 feature films, including Wonder Woman 1984 and the forthcoming James Bond film No Time to Die.

At the start of 2020, there were 10 major feature projects booked, all scheduled to start filming before the impact of the pandemic became apparent. One of the highest-profile features in the pipeline was Mission Impossible 7. The producers announced in late February that the shoot, due to take place in Venice, was delayed to avoid putting the cast and crew at risk. Other large film shoots around the world followed suit, in line with local lockdown orders.

The news from clients working in Asia, Italy, and Spain gave Cinelab London an inkling of the effect the pandemic might have on its business before the ripples fully reached the UK.

“We saw a really sharp contraction in the work that was coming in, and we obviously wanted to protect our staff,” Mahtani said. Those who could work from home were provided with the resources and support to do so. March 20 was the last day there was a full team in the lab.

Mahtani and Adrian Bull, co-founder and CEO, spent that weekend working out how to address the situation, consulting government websites and guidance from industry bodies such as the British Film Institute and UK Screen Alliance.

The prime minister announced UK lockdown plans on the following Monday evening, 23 March. Certain types of businesses that are open to the public, such as leisure facilities and nonessential retail, were ordered to close. The government’s social-distancing guidance stated: “Other businesses can remain open and their employees can travel to work, where they cannot work from home.”

Rather than close the premises completely, Mahtani was keen to maintain a skeleton staff. “From a team of 24, we decided to have four people in the lab: our lab manager, a production assistant, one of our engineers, and a scanning operator.”

Social distancing can be easily maintained by four people working in premises, which cover an area of 18,000 square feet, “so there was no risk from that perspective”, Mahtani said.

“We’ve taken staff safety strongly into consideration. We have supplied staff with [personal protective equipment], and as you enter, you have to be wearing a mask and gloves. We’ve got sanitisers as well. When the cleaners come in every day, they are paying special attention to sanitising any areas people commonly touch: door handles, alarm pads, kitchen sink taps.”

Staff drive to work in their cars rather than take public transport, so the risk of contact with others on the commute was not an issue. Deliveries of any packages containing new work (film to be processed) have to be agreed in advance, and the parcels are placed in quarantine for three days before they are handled. “The industry guideline was that if you don’t touch something for 72 hours, it should be infection-free. We’re trying to mitigate any potential risks so we don’t see any form of contamination.”

“The decision [to remain open] was financial, but it was also important to confirm that the four people we have in were safe and could continue to operate within that environment. If we had just mothballed the facility and then tried to open it up after three months, I think that would have been far more disruptive,” Mahtani said. 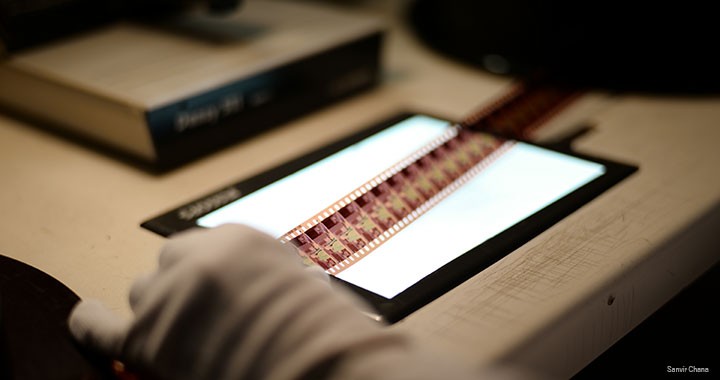 When seeking to identify and mitigate risks to the company, “one of the single biggest challenges is trying to make sure that we’ve got enough cash in place to sustain the business”, Mahtani said.

Mahtani and the company’s finance director identified payments they needed to defer and spoke to those suppliers, contacted the bank about a business interruption loan, and contacted UK tax authorities about deferring PAYE payments (certain taxes on employee income) and VAT in forthcoming quarters.

“We approached a number of people we had HP [hire purchase/lease] agreements with, to see if there were any payment holidays on the table, which they all kindly agreed to,” Mahtani said.

They also furloughed 17 staff once the government programme (aimed at avoiding redundancies as a result of the economic impact of the coronavirus) opened. The four members of the sales team are in rotation, with each working one week and then being furloughed for the following three weeks (the minimum period permitted). The four members of the scanning team follow the same pattern. This ensures that all of the team keep their skills sharp and stay engaged, Mahtani explained.

Board meetings switched from monthly to weekly, and a business continuity plan was put in place. “We created a list of action items that we wanted to achieve over the coming weeks to safeguard the business and to develop opportunities that will put us in a stronger position when the lockdown is eventually lifted,” Mahtani added.

With fewer staff around and reduced workflow, there was the space to run new internal fibre optic cable and install and commission recently acquired kit/machinery that would have been much more difficult to do in a normal working week.

Cinelab London has also continued work to promote the value of film, and advise directors, cinematographers, and post-production supervisors on how to work with it, through daily posts on its social media platforms as well as participating in industry forums and online events.

“Even if you’re running a skeleton team, there is value with staying engaged in your network or ecosystem, keeping people aware of what you’re still offering, letting them know about the other services that they may not be aware of,” said Mahtani, adding that the company has received new orders from prospective clients who had seen that they were open for business via social media.

Whether in terms of keeping staff up to date with changes, negotiating with landlords, or staying in touch with the industry, “one of the important things in this whole exercise has been the emphasis on good communication, which is even more difficult when we’re all working remotely”, he said.

Encouraged by a resurgence in the number of directors choosing to shoot on film rather than digital, processing material from new productions is Cinelab London’s lifeblood, accounting for 80% of the film processed and scanned, versus 20% restoring archive material or transferring it to digital format. The plan for 2020 was to continue to build that volume and use more of the latent processing capacity.

Given that shoots around the world have been on hold, Cinelab London decided to switch emphasis to the archive business. “Archive” content may suggest wobbly black-and-white footage from the early 20th century, and some of the work is from museum clients having reels scanned to preserve historical collections. But much of it is more modern than the name suggests.

For example, music videos, TV dramas, and commercials were all shot on film until the mid-2000s. The majority were edited and finished in standard definition. However, the original 35mm film holds a lot more detail than could be retrieved or extracted at the time. Current scanning technology enables technicians to produce a 4K resolution version from the original material.

One example of this, produced for Sony Music International by Cinelab London in collaboration with the video’s director, Andy Morahan, is the 4K resolution version of Wham’s “Last Christmas”, which can be seen here.

Remastering footage from Pink Floyd’s 1988 Delicate Sound of Thunder concert film is one of the largest-scale projects Cinelab London has undertaken recently. In collaboration with director Aubrey Powell and band members Nick Mason and David Gilmour, technicians worked with the original negative rushes. The ten-camera shoot, recorded over three nights, produced 350,000 feet of 35mm film (which is equivalent to 65 hours’ worth of material.) An excerpt can be seen here.

As lockdown has generated greater demand for TV and film, with audiences having the free time to watch more, while no new large-scale projects can go ahead, Mahtani and the Cinelab team hope more organisations will be delving into their archives to see what can be brought to a new audience online.

The film industry is obviously going to take some time to recover, but the sector “is very resilient and very determined to make this work”, Mahtani said. “If that means going on set with masks and protective gear and gloves, they will do it. If scenes have to be less intimate, they will find a way to make it work.”

Industry bodies have agreed and published protocols to support the safe re-opening of sets.

The number of orders coming in increased markedly in June, particularly from Spain, Germany, France, and Canada as restrictions began to ease in those countries.

“But my bigger concern is, if there’s an upsurge in the numbers [infection rates] again, that could potentially mean another lockdown later on in the year,” he said. “So, I think our recovery is going to be more of a W shape than a U shape, but it’s so difficult to call. The forecasts are changing all the time.”

For more news and reporting on the coronavirus and how management accountants can handle challenges related to the outbreak, visit FM’s coronavirus resources page.

— Samantha White is a freelance writer based in the UK. To comment on this article or to suggest an idea for another article, contact Sabine Vollmer, an FM magazine senior editor, at Sabine.Vollmer@aicpa-cima.com.