Excel’s new Dynamic Arrays functionality has not been out long — and it’s not available to most either — but Microsoft has already elected to make some significant changes.

The decision reduces the number of new Dynamic Array-related functions from seven to six. That’s because Microsoft has replaced the SINGLE function with the @ symbol. Microsoft also has expanded the capabilities, and streamlined the operation, of the RANDARRAY function.

Most Excel users don’t yet have access to Dynamic Arrays because they exist in what Microsoft refers to as “Preview” mode, ie, they are not yet “Generally Available”. However, the change with the SINGLE function does have ramifications for current Excel users.

SINGLE’s departure is where it’s @

My article “Excel: 2 New Errors and a SINGLE Function” discussed the concept of implicit intersections. In the past, if you entered =A1:A10 anywhere in rows 1 through 10, the formula would return only the value from that row. With Dynamic Arrays, typing this formula would create a spilled array formula. To protect existing formulas/behaviour, Microsoft originally called upon a new function, SINGLE, to ensure what is known as “legacy array behaviour”. The SINGLE function returned a single value using this implicit intersection logic.

For example, originally, the two SINGLE formulas in the example pictured below are supplied a range, H13:H27, and return the values in cells H17 and H22, respectively.

Now it’s all changed. Ladies and gentlemen, let me introduce you to the new implicit intersection operator, @. That’s right — Microsoft has changed its great collective mind and kicked SINGLE to the kerb for the more succinct @ operator.

It’s true that the SINGLE function was causing confusion and @ seems less obtrusive. But there was more to it than that. Since Excel 2010, the @ symbol has already been employed in Table references to indicate implicit intersection (and it was used there to replace previous Excel syntax too!).

For example, consider the Table formula =[@Column1]. Here, the @ indicates that the formula should use implicit intersection to retrieve the value on the same row from [Column1].

Going forward then, @ will replace SINGLE, and functions that return multicell ranges or arrays will be prefixed (“prepended” in Microsoft-speak) with @ if they were authored in an older version of Excel.

It is important to note that there is no change to the way your previous formula behaves — that’s the entire point of Microsoft’s move: It’s necessary to prevent the new “spilled” behaviour. Common functions that could return multicell ranges include INDEX, OFFSET, and good old user-defined functions (UDFs). It should be noted, though, that a common exception is if they are wrapped in a function — often an aggregate one — that accepts an array or range (eg, SUM() or AVERAGE()).

Microsoft has provided examples to try to clarify how things should work:

Remembering that the @ symbol will only appear in “Dynamic Array Excel”, do consider carefully the ramifications of removing these pesky little @ critters. Before deleting, check the function/formula immediately after the @ symbol. With regard to this expression:

You have been warned. Don’t put your spreadsheets @ risk!!

We first mentioned RANDARRAY back in our series of articles on Dynamic Arrays. Originally, the RANDARRAY function returned an array of random numbers between 0 and 1. This function has been revamped: It now allows you to set your own maximum and minimum and decide whether you want the values returned to be decimals (eg, 17.4381672…) or integers (whole numbers).

The new syntax for the function is now as follows:

The function has five arguments, all supposedly optional (but upon testing, I’m not convinced):

If you are lucky enough to get access to the new RANDARRAY, do be aware of the following:

When we originally discussed the RANDARRAY function, I used this rather comprehensive example to create a list of random integers between two values:

Originally, the formula in cell F44 was

and I explained at length how this worked. However, it’s much easier now: 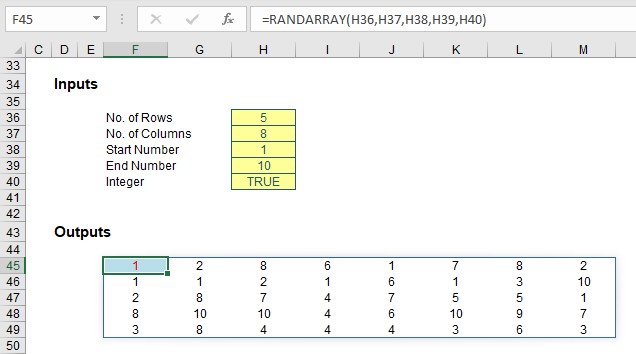 See how simple that is? If this keeps up, I’m going to be redundant soon!

if you want to see if you can gain access to Excel’s preview mode, you may register in File -> Account -> Office Insider in Excel’s backstage area:

Whilst you’re not guaranteed access, as only some users will receive the new features as Microsoft slowly rolls them out, please don’t let that put you off. These features will be with all Office 365 subscribers soon.

You can check out more about Dynamic Arrays in our seven-part series that ran in late 2018. Links are below.

Part 4: This Excel Change is More Than SORT of a Big Deal