Trust — or a perception amongst customers, employees, and regulators that your organisation will act honestly, fairly, and reliably — is an important consideration for any business and is key to its long-term viability. Building trust facilitates better relationships with stakeholders, promotes loyalty amongst customers, and can make investors keener to back the business. When staff have trust in their employer, they are more engaged, more productive, and more likely to remain loyal.

Trust in business in general has fallen by 10 percentage points in the past year in the US, and by 2 percentage points in the UK, according to the Edelman Trust Barometer 2018. The annual survey measures the level of trust citizens have in the institutions of government, business, media, and nongovernmental organisations (NGOs) to do what is right. Scores below 50% indicate distrust, 50%–59% neutral, and 60%+ that trust exists. This edition of the survey gathered opinions from 33,000 respondents in 28 countries.

Globally, trust in business remained stable among the general population (52% last year and this year, 53% in 2016) and declined by one percentage point from 65% to 64% among the informed public, defined as university-educated, age 25 to 64, and in the top 25% of household income per age group in their country.

While trust in some nations and institutions fell, trust in CEOs recovered from an all-time low in 2017, a recovery that Edelman attributed to high-profile business leaders voicing positions on issues of the day. Sometimes, executives speak out individually. On 24 January, for instance, AT&T Chairman and CEO Randall Stephenson issued a statement to reiterate the company’s “support for the principles of an open internet.”

At other times, they joined together. In February 2017, for instance, about 100 companies were part of an amicus curiae brief (filed by a third party that is a not a party to the case, providing a legal argument in an attempt to influence the court’s decision) submitted in response to the US travel ban. The brief outlined the companies’ concerns about the potential impact on business, innovation, and growth related to US President Donald Trump’s executive order temporarily suspending residents of Sudan, Syria, Iran, Iraq, Libya, Somalia, and Yemen from entering the United States.

Perceptions of voices of authority

Experts and voices of authority have regained credibility among the public since the previous edition of the barometer. Trust in financial industry analysts rose four percentage points with 50% of those polled saying that these were very or extremely credible, and technical experts rose three percentage points to 63%.

However, there is still some work to do. While 56% agreed with the statement “companies that only think about themselves and their profits are bound to fail,” 60% agreed that “CEOs are driven more by greed than a desire to make a positive difference in the world.”

Building and maintaining trust is high on the list of the public’s expectations of CEOs.

Respondents listed the following as their most important expectations of a CEO: that their company is trusted (a priority for 69% of those polled), their products and services are high quality (68%), and that business decisions reflect company values (64%). Profits and stock price increase were a key concern for 60% of respondents.

Sixty-four per cent said CEOs should take the lead on change rather than waiting for government to impose it. This is related to the decline in trust in government recorded in 20 out of the 28 countries covered in the barometer.

Trust in one’s employer had increased in the majority of countries covered since 2016. Globally, 72% of respondents said they trusted their organisation.

How much of a concern is trust for CEOs?

According to PwC’s 21st CEO survey, launched in January, 22% of chief executives around the world said they were “extremely concerned” about the threat posed by lack of trust in business to their organisation’s growth prospects. The number expressing extreme concern amongst UK CEOs was 15%, and amongst US CEOs, 13%.

In terms of the relationships affected, 18% of respondents said their organisation was experiencing a decline in trust from their customers, and 20% said that the level of trust between the workforce and organisation’s senior leadership had declined. Seventy-one per cent of CEOs measure the trust their employees place in the company.

The Trust Index shows the average level of trust citizens have in their country’s institutions (business, government, media, and NGOs) to do what is right. 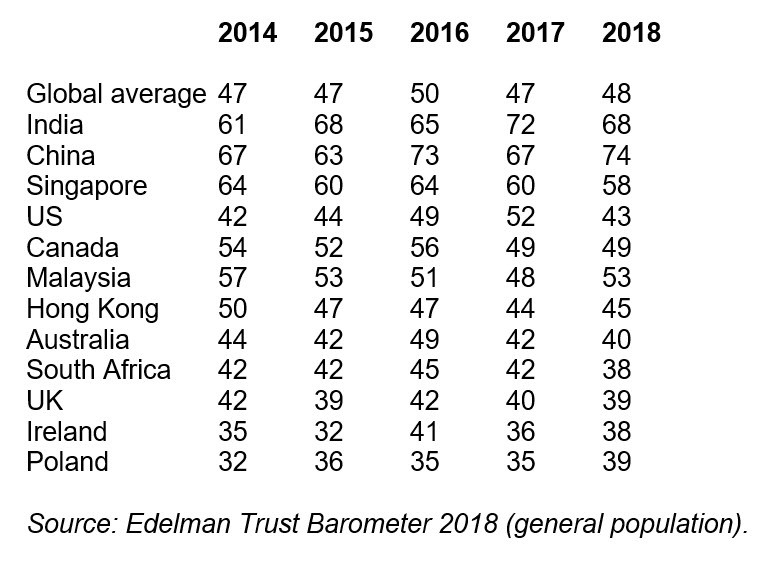