Analysing corruption risk should be a key factor in businesses’ research into a new market. Involvement in corruption, whether direct or via a third party, poses reputational risks as well as risk of prosecution under legislation such as the UK Bribery Act or US Foreign and Corrupt Practices Act (FCPA).

Corruption remains widespread in many countries, and the latest edition of the corruption perceptions index from Transparency International suggests that the problem worsened in more markets than improved in 2016.

The index measures perception of corruption as it relates to a country’s institutions and the decision-making of its public officials. The scale runs from 0 (highly corrupt) to 100 (very clean). Countries scoring less than 50 are considered to have a serious corruption problem. The global average score was 43, and more than two-thirds of the 176 countries and territories in the index scored less than 50.

Topping the transparency list were Denmark and New Zealand, each scoring 90. These were followed by Finland (89), Sweden (88), and Switzerland (86). The authors of the report observe that the countries at the top share characteristics of open government, press freedom, civil liberties, and independent judicial systems. Singapore came in seventh place, scoring 84, UK shared the tenth ranking, with a score of 81, and the US ranked 18th, with a score of 74. 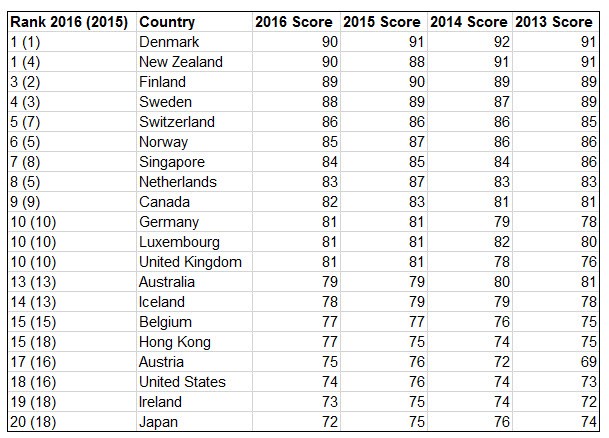 Brazil, India, and China share 79th place, each with a score of 40. There does appear to be an appetite for tackling corruption in these countries. “China and Brazil are prosecuting very widely at the moment,” said Peter van Veen, Business Integrity Programme Director at Transparency International. “In India there is clearly a move to tackle what is a deep-rooted and quite widespread problem.”

But Russia, ranked 131st with a score of 29, is going in the opposite direction, observed van Veen. “[The situation] has got worse pretty much every year since we started the index.”

When considering a new venture, “businesses should do their homework and prepare adequately,” van Veen said. “Quite some effort is required to ensure that you are not part of a corrupt system.” Due diligence is essential, even when a particular country is considered low-risk in terms of bribery.

For instance, companies should look at the risks that might be inherited in a specific transaction or business line.

“Businesses should really focus on third parties such as distributors, agents, local partners, and intermediaries because they are often the biggest risk to the supply chain and to the company in terms of getting caught up in bribery,” suggested van Veen.

His research into cases pursued under the FCPA suggests that the majority of companies that received fines for bribery involved a third party paying the bribe. “Be wary that you are not being asked to do things that actually constitute a bribe,” he said.

Van Veen noted that corruption is not evenly spread across a country. “In areas seeking to encourage inward investment, the authorities are likely to be a lot less tolerant of this kind of behaviour because it’s bad for business,” he said.

Is the opportunity worth the risk?

“There are very few places in the world where you cannot do business without paying a bribe if you put the effort in,” van Veen said. But in some locations, the opportunity many not be worth the effort. “In those situations you need to ask yourself if you really want to be there as a business.”

High levels of bribery and corruption often go hand in hand with other issues which make a destination less attractive or practical. “If you feel you cannot do business without paying bribes, there are often issues around staff safety, for example.”

“The cost of corruption gets transferred through into consumer prices and real estate,” he said, increasing the cost of doing business for locals and expatriates alike.

For instance, Angola ranks 164th on the transparency index, with a score of 18 in 2016. Its capital, Luanda, was ranked the second most expensive city in the world for expats in Mercer’s 2016 Cost of Living Survey.