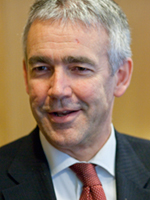 As CFO of Royal Dutch Shell, Simon Henry, FCMA, CGMA, counts strategy and planning among his responsibilities at the oil giant.

So he undoubtedly played a role in the company’s decision to acquire BG Group for $70 billion. The deal, announced last month and expected to close in 2016, enables Shell to enter new markets, such as Brazil’s “prolific” offshore oil basin, and give the company a larger portfolio of liquefied natural gas. The deal also would enable the combined company to cut down on overall spending, including exploration costs, and improve free cash flow.

Months before the deal was announced, Henry spoke about the value of entering new markets during a session at the World Congress of Accountants (WCOA) in Rome.

“All demand for energy is now in emerging markets,” Henry said in November. “Energy demand has stopped growing in developed markets. So you need to look at how energy is consumed in quite different ways as the emerging markets urbanise [and] new technologies come through.”

He said that the focus on emerging markets is one part of a paradigm shift in the oil and gas industry. Another key is the environmental and societal impact of global climate change. “We need to be far more sensitive to the impact that we have on the people around us,” Henry said.

Other highlights from his comments at the WCOA session:

On dealing with regulation: “Sometimes I’m asked what keeps me awake at night, and about the only thing is regulatory compliance around the world. It is a moving target. The developments, whether they’re in the finance area, the technical, the environmental, the markets area, it is getting increasingly challenging for any company to meet the global requirements.”

Growing concern about cyber-threats: “A threat that I don’t lose sleep over, but probably I should spend more waking time on is cyber-security, certainly. And this is a big issue, I suspect, for many finance leaders now. The number of threats out there, particularly for a high-profile target — the brand is great, but it’s also a target for bad people of all kinds, whether it’s financial fraud, malicious damage, IP theft, or commercial harm. … Putting a boundary around management information is currently high on a board or audit committee agenda, as to who gets to see what and how you protect it.”

Diversity’s role in leadership development: “Don’t always recruit people who are ending up the same as you. To get that external insight and understand where the competition is going, sometimes you need people who think differently and have a different perspective, because it’s very unlikely your own people will see easily outside their own boundaries. So encourage inclusiveness and diversity within the teams. ... You must be inclusive in the way you bring that perspective in, and be prepared to listen to the views of others, and be able to understand how that impacts you.”

How to approach after-hours work: “I try not to be visible outside normal working hours. I might be working, but I try not to put too much pressure on people to work 24/7, because I don’t think it’s healthy, and you don’t get the best out of people.”

Critical traits to get ahead in your career: “Curiosity. You can learn something every day if you just listen and ask. Humility. Authenticity. We don’t know everything. There’s always somebody better at doing something than I am. Just find them.”