During the recession, many companies were hesitant to buy new computer hardware or upgrade software. For some, it was hard to justify the investment when cost-cutting was the norm and aging equipment was still working.

But an improvement in economic conditions, the need to provide customers with better technology, and heightened concern about cyber-security have led to a steady increase in information technology investment over the past few years.

CPA decision-makers have carried a positive outlook on IT spending in recent quarters, according to the Business & Industry Economic Outlook Survey released Thursday by the American Institute of CPAs.

Although IT spending projections declined slightly in the most recent outlook, it is one of four survey indicators that remained above 75. A reading above 50 indicates a generally positive outlook (see full index below).

Meanwhile, more CPA decision-makers are optimistic about the US economy than any time in the past ten years, according to the outlook. While the momentum of executives’ optimism slowed overall in the most recent quarter, respondents remain positive about revenue and profit projections, especially when compared with first-quarter numbers in previous years. And that, in part, is emboldening companies to spend more on IT.

One company that is continuing to invest in IT on several fronts is Alaska Air Group Inc., a publicly traded airline with about 14,000 employees and $5.4 billion in annual revenue.

Chris Berry, CPA, Alaska Air’s corporate controller, said the company recognises it has underinvested in IT and is reversing that trend. The past three to four years, Berry said, “we’ve been focused on our costs being competitive, so we put a halt on a lot of things, including IT spending.” But spending on IT has doubled since then, he said, with the focus on customer-facing projects such as mobile technology.

One example of the company’s innovation is its experiment with biometric boarding passes, where a fingerprint serves as a way for customers to board Alaska Air planes. The airline already uses biometrics to allow customers entry to airport lounges.

“We’re in such a competitive industry that we have to focus a lot of our IT spend on customer innovation products,” he said.

Berry also said the company has invested recently in computer and email upgrades. It also has spent more on beefing up its cyber-security efforts. That has come in part through hiring new positions devoted solely to data privacy and data security.

Berry said a strong local economy in Seattle, where the company is based, gives him reason to expect the company to continue to grow. For the US economy overall, he expects slow but steady growth.

Another finance decision-maker who expects his company to grow is Luigi Buffone, CPA, CGMA, the vice president of finance for Avatar Corp., which sells specialty ingredients to food, drug, and cosmetic companies.

Buffone said plenty of headwinds exist for both the global and domestic economies, but he is hopeful that Avatar will grow, possibly through acquisitions in the coming year. He said the company, which is based outside Chicago, plans to hire and also to upgrade its technology.

“There are positions we’re looking to put in place to support our growth initiatives,” Buffone said. “With the number of things we are doing, there is likely to be a slight increase in IT spending. To stay competitive, you have to have all the information you need quickly.”

Centennial Bank in Denver is doing solid business, according to Marc Hendrikson, CPA, CGMA, the bank’s senior vice president for commercial lending. While the bank remains lean, he said, it is in the process of adding to its staff of about 140.

“We just hired a senior credit officer. That position didn’t exist before,” Hendrikson said. “We’ve grown to the point where we need that position.”

He said clients for business loans are coming in because they held on to machinery longer as they tried to wait out the recession. Now, it’s time to invest.

“Everything they own is breaking, from boardroom chairs to their PCs to (bulldozers),” Hendrikson said. “The deferred spending is roaring. They were so careful for so long, and now they don’t have a choice.”

Centennial Bank, which has 14 branches and more than $730 million in assets, is also investing in necessary infrastructure, including improving its cyber-security controls.

“The risk on the cyber-security side has become so large,” he said. “It’s not our money, it’s our customer’s money that the (hackers) are targeting. … It’s a non-earning investment, but that’s the world we’re in right now.”

Other highlights of the survey: 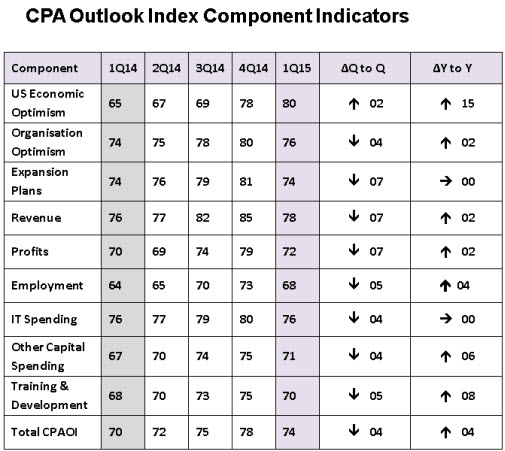 “Some ERM Practices Going Stagnant, Survey Indicates”: Senior finance executives say their companies are often not in alignment about the need for enterprise risk management oversight, a survey on behalf of the American Institute of CPAs shows.

“US CFOs Confident in Economy, Plan to Spend More in 2015”: US finance executives show more interest in spending than amassing cash, seeing opportunities in the economy but also feeling the need to keep up from a technology and talent standpoint.