Who will you be rooting for when the World Cup gets underway? While most of us support our home nation or favourite players, a group of analysts from Goldman Sachs has taken a somewhat less romantic approach to forecasting the winners.

In The World Cup and Economics 2014, the investment bank predicts a Brazil vs. Argentina final, with the host nation emerging victorious. Germany and Spain will reach the semifinals of the tournament, according to the analysis. This final four may not be particularly revelatory, and the picks are broadly in line with the odds offered by bookmakers, but past footballing prowess was a key ingredient in the analysts’ model.

The authors of the report built a stochastic model to generate a distribution of outcomes for the tournament’s 64 matches, set to take place between June 12th and July 13th. The predictions for each game are based on a regression analysis that takes into account the results of all of the competitive matches the teams have played since 1960. From there, the probabilities of each nation winning the championship were calculated. Brazil emerges as the clear favourite with 48.5, followed by Argentina (14.1), Germany (11.4), Spain (9.8), and the Netherlands (5.6).

According to the report, Brazil performs statistically better in World Cup matches than in any other type of competitive game and already has five World Cup championship titles under its belt.

Although the model doesn’t take climate or the vast distances some teams will have to travel between fixtures into account, it quantifies home advantage as being worth an extra 0.4 goals per match. Thirty per cent of World Cup tournaments since 1930 have been won by the home side. Furthermore, no European team has ever won a World Cup held in the Americas, strengthening the case for a Brazil-Argentina final.  According to the report, the availability of vast open tracts of land (as in Brazil and Argentina) also increases a country’s chances of making it to the World Cup finals.

However, it seems that statistical models can only take you so far when it comes to the beautiful game. To test their approach, the analysts applied it retrospectively to the 2010 competition in South Africa. It correctly picked three out of the four teams to make the semifinals but backed Brazil to win. In real life, the Spanish team took the trophy home.

The eventual winning team can expect to see a temporary boost to its nation’s stock market. Analysts found that stock markets in the winning nation outperform the global equity market by 3.5% in the month after the tournament, but this boost fades after three months, with equities tending to underperform by around 4% over the following year.

England fans, who have been eagerly anticipating another victory since the halcyon days of 1966, don’t need a statistical model to tell them their chances are slim; you just have to look at their rivals in the initial group stage of the tournament: Costa Rica, Italy, and Uruguay. Even UK government officials recently based a decision on whether to extend pub licensing hours on predictions of an early exit for the squad.

The US team is up against similarly tough competition at the group stage in the form of Germany, Ghana, and Portugal. 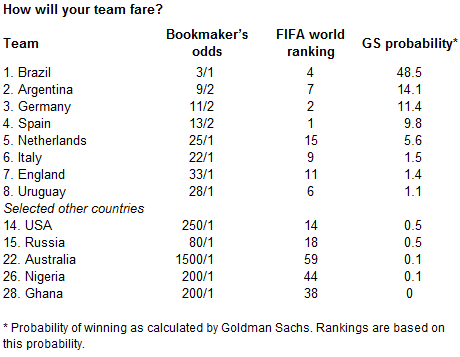