Two CPA decision-makers at trucking companies in the Midwestern US have pretty much the same outlook on the nation’s economy and their businesses: They are buoyed by lower fuel costs and increasing demand, but a driver shortage is keeping them from being able to haul every load a customer wants.

Their sentiment sums up key themes found in a new survey by the American Institute of CPAs: The view is generally positive, but there is rising concern about the availability of skilled personnel.

The fourth-quarter Business & Industry Economic Outlook, released Thursday, shows gains across all nine indicators in the CPA Outlook Index (CPAOI). US economic optimism, one of the indicators, is up 22 points from a year ago to 78. Projections for profit (up ten points since the fourth quarter of 2013) and employment (up nine points) also show widespread optimism, helping the overall CPAOI hit 78 (see chart below). A reading above 50 indicates a generally positive outlook.

Regulation, including implementation of the US health-care reform laws, continues to be the top obstacle for businesses, according to the survey of 830 finance executives. Just behind regulation is concern about the availability of skilled personnel, a concern that was rated sixth on a list in the fourth quarter of 2013.

Finding good workers is a concern at Melton Truck Lines in Tulsa, Oklahoma, where Melissa Ruby, CPA, is the controller. She said that 10% of Melton’s trucks are unused because the company is having a hard time finding and keeping drivers.

“We don’t have a truck for every call that we get,” Ruby said. “We don’t have somebody that can go and pick up that load. Obviously, there’s a lot of opportunity cost when you’ve got those trucks parked against the fence.”

She cites the boom in oil and natural gas, and an uptick in construction, as reasons that drivers have left recently. Some drivers are taking jobs in those industries instead.

But Melton is taking steps to not only keep the drivers it has but also attract others. One way is through regular pay increases and other incentives, Ruby said. Another is by building a new corporate headquarters and highlighting its amenities. Among the features of the 77,000-square-foot facility is a 3,500-square-foot fitness centre, including a section for women only. The company’s website has a portal for viewing live construction updates.

Good benefits and competitive pay are offered to offset the time demands of truck driving.

The company moved into the building about a year ago and views it as part of its growth strategy. Nussbaum has annual revenue of $60 million, and Wettstein projects revenue to grow 20% in the next year.

“Our employees definitely want to come to work in this building,” Wettstein said. “We try to send a message to our workers and our vendors and customers that we have a high standard of excellence in everything that we do.”

Like Melton, Nussbaum is seeing high demand for its services – in freight industry parlance, capacity is tight. That’s a reason Wettstein is optimistic about the US economy.

Another optimist is Stephen Ure, the CFO at Supplemental Health Care, a staffing company in Park City, Utah. While implementation of the new health-care laws is proving to be a regulatory headache, Ure said the law’s existence means hospitals are staying busy and hiring more of his company’s doctors, nurses, and therapists.

“Our business has had its ups and downs, but right now, it’s pretty good,” Ure said. “The hospitals are doing well, and when they’re doing well, they hire.”

Ure said the company has struggled to hold on to some IT employees as salaries in that field have risen. Finance demand has also increased, but so far the company hasn’t lost too many finance workers.

“When we grow and have to add people, it’s hard for us to find” qualified finance staff, Ure said.

Growth is a theme of this quarter’s survey, where 71% of respondents said they expect their business to expand in the next 12 months, compared with 62% who felt that way a year ago.

Fifty-one per cent of companies say they have the right amount of employees, a decrease of 6 percentage points from a year ago. Twenty-three per cent say they have too few employees and plan to hire, compared with 13% who said that in the fourth quarter of 2013.

Other key findings in the survey: 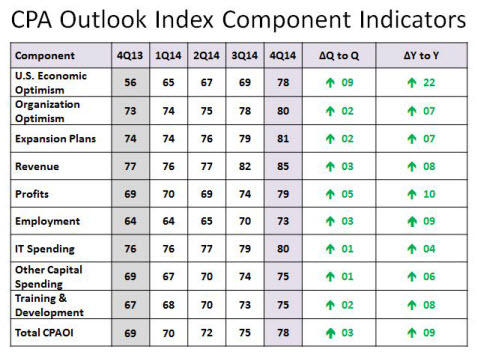 “US Accountants’ Optimism Returns to Pre-Recession Levels”: US accountants’ expectations for revenue, profits, and hiring continued to rise, helping to push the CPA Outlook Index to its highest point since 2007. All nine components in the index rose by at least four points in the past year, reflecting improved outlooks across multiple industry sectors in the third quarter of 2014.

“CFOs Cool on Hiring, but They Have Advice for Staff Development”: Cost-cutting is the top priority of CFOs’ bosses, and staffing projections for the coming year are lower, according to the quarterly Deloitte CFO Signals survey. The survey also says talent costs are a rising concern for North American finance chiefs tasked with trying to save money.