US companies expect to make more money, and spend more of it, in the year ahead – and that could translate into more jobs. At the same time, finance executives’ outlook of the overall economy has cooled.

Those are the key takeaways from the third-quarter Business & Industry Economic Outlook Survey, released Tuesday by the American Institute of CPAs.

The quarterly survey takes the temperature of more than 1,200 finance professionals across industries, gauging their outlook in nine key areas: US economic optimism, organisation optimism, expansion plans, revenue, profits, employment, IT spending, training and development, and other capital spending.

Those nine indicators make up the CPA Outlook Index (CPAOI), which matched a post-recession high of 69 in the most recent survey. That’s even with last quarter, when optimism about the US economic outlook and the fortunes of respondents’ own companies surged. A score above 50 indicates a positive outlook.

Hiring on the rise?

Companies plan to ramp up hiring, according to the survey. About one-third of companies (34%) said they have too few employees. Also, 15% plan to hire, up from 9% a year ago. That’s a post-recession high for the survey. Small businesses in particular are more inclined to hire; 20% said in the most recent quarter that they are reluctant to hire, compared with 25% who were reluctant to add staff in the previous quarter.

Overall, companies plan to grow their staffing 1.3% in the next 12 months, compared with 0.8% a year ago.

The most recent CPAOI was propped up by improved attitudes about revenue – and how that money might be spent. The outlook for revenue hit its highest point since the first quarter of 2012. Meanwhile, optimism surrounding expansion plans and other capital spending – and profits – climbed to their highest levels in the past year. The outlook for IT spending also remained strong.

The outlook in those categories was tempered by optimism about the overall US economy, which dipped from 66 to 62 – the biggest quarter-to-quarter drop of any of the nine indicators. Organisation optimism also dipped by a point compared with the previous quarter, as did the outlook for training and development expenditures. Those declines, driven in part by concerns about health-care reform and political gridlock, kept the index from eclipsing 70 points – a mark last achieved in 2007.

The short-term story obscures the tale of an otherwise upbeat year. On a year-over-year basis, sentiment improved in all nine sectors of the index, including a 21-point increase in US economic optimism and a seven-point gain in company optimism.

Roth Distributing, which supplies high-end household appliances to dealers, retailers and homebuilders in 14 central US states, projects double-digit revenue growth through the end of 2014. If that pace keeps up, Roth’s ranks will likely grow, according to Gary Stoker, CPA, controller and treasurer of the company.

“We’re cautiously optimistic about the future,” Stoker said. “We’re confident based on our strategies, and we feel very good about our business in the Midwest. Ultimately, our sales are going to mirror what happens in the economy in the US.”

Revenue for Roth was $92 million in 2007 before dipping to $51 million by 2011, following the US housing bust. The company has rebounded, however, with revenue for this fiscal year projected to be $61 million.

Stoker, who took part in the survey, is concerned about the impact on the business of health-care changes and tax reform in Washington. Other finance professionals cite regulatory requirements and changes as the top challenge for the second consecutive quarter. Domestic economic conditions are the No. 2 challenge, ahead of employee and benefits costs.

David Kvendru, CPA, CGMA, is also feeling better about his company. Kvendru, who is CFO of the San Diego Association of Realtors, said the housing market’s rebound has helped increase membership to near pre-recession highs. A year ago, the SDAR had about 10,200 registered real-estate agents; as of late August this year, that number had grown to 10,700.

He expects membership to grow to 11,000, which he hasn’t seen since shortly after joining the organisation in 2005. “I’m feeling the same energy that I felt in 2006,” Kvendru said.

Kvendru is moderately optimistic about the US economy, despite potential snags with the implementation of the Patient Protection and Affordable Care Act, the key legislation that underpins US health-care reform. Some of the main provisions, including the employer mandate, were scheduled to take effect on January 1st but were delayed a year. He also wonders about the global economy’s effect on the United States.

“I think the US economy is going to be just fine, as long as Europe or some of the BRICS don’t drag us down,” said Kvendru, referring to the nations of Brazil, Russia, India, China and South Africa.

The coming quarters will be telling for Kvendru and Stoker. The return of the US housing market has buoyed economic optimism in recent quarters. Optimism in the real estate and construction industries each climbed to two-year highs in the second-quarter Business & Industry Economic Outlook Survey.

But the climb stopped in the third quarter. Optimism in the construction industry levelled off at 59%. And real estate dropped four points to 56 – the biggest decline in nine months.

Other highlights from the survey:

Each component of the CPAOI is calculated by taking the percentage of respondents who indicated that their opinion or expectation for the metric is positive or increasing, and adding to that half of the percentage of respondents indicating a neutral or no-change response. A reading above 50 indicates a generally positive outlook with increasing activity. A reading below 50 indicates a generally negative outlook with decreasing activity. 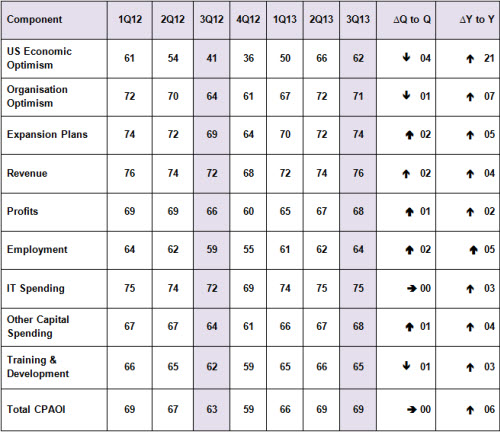