Pay raises for CFOs at US companies last year depended heavily on a company’s size and revenue growth.

Companies that grew by 50% or more in the three years prior to April 2012 increased their CFOs’ cash compensation by an average of 20.2%, according to a report by Verisight and The CFO Alliance.

The study examined pay at 204 US companies for the 36 months before April 2012. The inaugural report focused on companies with revenue between $2 million and $2.6 billion.

The report predicts base salary increases for executives in 2013 to be 3%. Chief executive pay undergoes the most dramatic shift based on company growth, the report said.

Change in base salaries and total cash compensation over 36 months based on overall company growth, defined as a change in top-line revenue over 36 months. 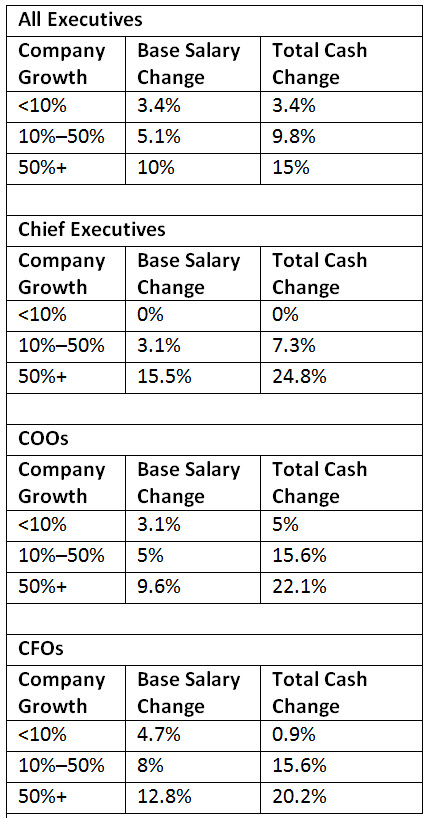 Sources: Verisight and The CFO Alliance.

“CFO Pay Increases, but CEO Pay Climbs More”: CFOs make less than one-third of what CEOs do at S&P 500 companies, and the gap appears to be widening, mainly because of increases in variable compensation.

“More Financial Executives Are Getting Raises – and the Raises Are Bigger”: Data from surveys in the US and elsewhere showed that pay increases were more common in 2012 and that the raises on average were bigger.