Shared services are no longer solely the preserve of large organisations. So what are the benefits for midsize businesses, and how can they manage a successful transition to shared services?

Shared service centres rose to prominence in the early 1990s, when far-flung companies decided to end back-office duplication. Instead of having multiple payroll, purchasing and accounts payable units, many companies opted to pool resources, hoping to save money through better coordination.

In some cases, the results were dramatic. Between 1999 and 2008, Procter & Gamble saved $600 million by consolidating its finance and accounting, human resources, facilities management and information technology functions into one unit. It then set up regional hubs – in the Philippines, Costa Rica and the UK – to serve the rest of the business.

In the process, it closed dozens of small units and outsourced non-core operations, such as payroll and travel support.

Such consolidations have largely been carried out by large US companies. But in the past 10 years, many midsize firms have adopted the concept. The trend also is becoming more global.

About 80% of centres set up in the past three years are outside the US. Regions such as Latin America and Asia are increasingly involved in consolidations, according to Deloitte’s 2011 Global Shared Services Survey, which was based on responses from 270 managers.

Since 2009, the menu of consolidated services also has evolved, encompassing functions beyond finance and accounting.

About a quarter of the respondents have also moved sales, marketing and real estate functions to shared service centres. About half the centres perform more than one function, potentially widening the savings they offer.

Cost remains the biggest reason for consolidating functions into shared service centres. But it’s not the only driver. Managerial control can be equally important, according to Mike Gallanis, a partner at the US consulting firm Treasury Strategies and a veteran of 20 years of finance function consolidation. Companies are often trying to bring some order to operations that may have grown haphazardly through expansion and acquisition, he says.

“They reach a point where efficiency and information flow starts to dwindle, and control drops off,” he says. “It happens because there is too much geographical distance, and in some cases there are cultural differences as well.”

The conundrum for managers is to establish at which point a shared service centre may become worthwhile. Gallanis says companies carry out a cost-benefit analysis, pitching the potential for increased efficiency and control on one side of the ledger, with capital commitments and potential human upheaval on the other side.

“Companies will say there’s too much risk having operations thousands of miles away, where they are having to manage huge time-zone differences and potential language differences,” he says.

While language remains a concern, proximity is becoming less of an issue, the 2011 Deloitte study indicates. Forty percent of respondents said close proximity to operations was of some importance when selecting a shared service centre location. And 29% thought it was important to have the centre close to the company headquarters. That’s down from 55% and 44%, respectively, in Deloitte’s 2009 survey.

While there is plenty of evidence that shared service centres result in financial savings, some companies have failed to wring all the advantages they expected, and some say they wished they had done things slightly differently.

A survey of 250 companies by the Shared Services & Outsourcing Network and the Hackett Group found that half of the companies surveyed expected 20% savings from establishing a shared service centre, but only 38% actually achieved it. Barely one-third overall managed savings of more than 20%.

Almost 60% of the companies in the Deloitte survey said they could have increased their change management connected with a shared service move. Meanwhile, 52% pointed to the need for better alignment between process change and technology change, and 46% mentioned the need for stronger executive support.

Deloitte says that organisations that fail to focus on issues of morale and culture, in particular, can risk a loss of employee support and productivity. Furthermore, communication, training and managerial engagement are all vital, the report says.

MGM Resorts International is a good example of a company that has wrung huge savings from consolidating back-office functions. But the human issues have been challenging.

In the past five years, the company has taken the finance functions of 15 hotels and five joint ventures and created a single centre for its entire payroll, the 1 million-plus invoices it receives every year and its $1.7 billion in annual purchases. The shared service model it has adopted is a pure consolidation (rather than involving outsourcing). It became necessary after the mergers that introduced inconsistencies in its accounting practices and IT systems.

Rick Arpin, CPA, CGMA, corporate controller at MGM, estimates that the company has spent $10 million on IT and consulting to make the change, but has achieved at least $10 million in annual savings, mostly from reducing the number of people it employs. Across its 10 Las Vegas properties, for instance, MGM employs about 40 to 45 people for revenue processing, down from more than 150.

“The processes that we had in the past were pretty manual. The gaming industry is quite regulated, and on the food and hotels side it’s an industry that hasn’t adopted an ERP model,” explains Arpin. “As we brought things into the central environment, it has allowed us to move people, and to automate the process.”

Switching people over was not easy, Arpin says. Employees did not want to give up their roles; some hotel managers did not want to lose autonomy; and some employees were not prepared for more technology-centric tasks.

“The positive side is that they had great knowledge of our business, but the negative is you have to get them to do a different job,” he says.

Arpin said that some of his staff were not used to working in a process-oriented way and didn’t have the required client-service mentality.

“Most of the folks came from one property and working for one supervisor,” he says. “They didn't know how to deal with multiple demands on their time, or how to deal with people with different personalities.”

To smooth the transition, Arpin says, it was vital to have senior-level support, and to be aware that some changes can have unforeseen consequences. “Pulling people out of the operation has been a detriment to us on specific issues. Certain regulatory and compliance issues are easier to do on site, for example.”

Nitish Kirtikar, ACMA, CGMA, senior manager for transaction processing at the Indian unit of a large oil company, places a similar stress on people issues. He says that the major challenge in shifting to a shared service model is to “convince all the stakeholders in the business that it is a better model than a classic finance department, where there is no specialisation and no segregation of the repetitive from the non-repetitive processes.”

Until recently, the company had three treasury departments in three cities, but has now moved to a single Indian site. As a result, processes have been standardised, and the company has been able to reduce head count by between 10% and 15%.

The shift to a single centre has also seen a consolidation of banking services, which has led to better cash management and improved liquidity.

“My advice would be to involve a professional consultant to study the responsibilities, the manner the flows are carried out, and then map those with the target processes,” says Kirtikar. “Once you do that, it is much easier to work out the head count reduction and the cost savings that can be achieved.”

Gallanis says it is important that companies follow through on their initial plans, particularly in the wake of mergers and acquisitions. He says managers will sometimes talk about consolidation initiatives, but fail to follow up.

“Where it does go awry is when organisations don’t go through the painstaking process of folding in all the operational aspects of the business,” he says. “They then get involved in another M&A deal and repeat the pattern, and before you know it, all your international units are disjointed.”

To avoid this, Gallanis says, it pays to plan where service centres might be needed in the future.

“You can see when you think your sales will grow to a certain level in a region, and then start making some decisions about when to introduce a service centre. At a certain time, you’ll reach a tipping point where it starts to make sense.”

Deloitte has conducted its Global Shared Services Survey every two years since 2003. The survey charts strategy trends of consolidation-minded companies.

The most recent survey, released in March 2011, showed that cost reductions are still the chief reason for consolidating functions into a shared service centre. But the survey highlighted shifts in where companies are locating centres and how they’re implementing consolidations.

Among Deloitte’s other findings: 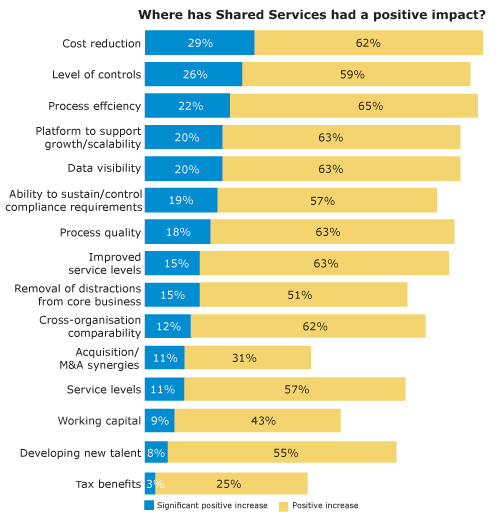