Management accountants can make strategic contributions across businesses in a variety of ways by using their expertise in data and analytics.

The business services team I led at Mackay Water & Waste (MWW) at Mackay Regional Council in Queensland, Australia, is one practical example of how that can work.

MWW supplies water, sewage treatment, and garbage services for the residents of Mackay, the area at the southern end of the Great Barrier Reef, about 1,000 kilometres north of Brisbane, the state capital of Queensland. MWW is a commercialised business unit of Mackay Regional Council, operating at arm's length from the council's noncommercial activities, with separate financial records such as the P&L and balance sheet. It is expected to generate a return on the investment in the business.

There are no regulatory limits imposed on pricing (community pressure on elected members generally plays that role), but there is an obligation for the services to be provided to all properties within declared service areas.

As MWW is owned by the local government, there are no shareholders, so future capital requirements (asset renewals as well as asset expansions to meet increasing demand) have to be financed through fees (known as "tariffs") paid by customers. These fees charged to consumers include a component to cover estimated future capital investments, including any loan repayments (see the sidebar, "Water and Sewage Service Charges").

Increasing water consumption, whether driven by increasing per capita consumption or increasing population (usually both), drives up the requirement for future capital investments, which in turn drives up water charges.

When I arrived at the council in 2010, the water and sewage charges in Mackay were some of the highest in Queensland. In addition, the long-term financial forecast projected its charges growing at annual rates of between 6% and 7%, about twice the rate of consumer inflation.

The world was two years post the global financial crisis, and it would be another two years before a downturn was felt in the Mackay region. However, despite the strong local economic conditions, maintaining consistent growth in water service charges over the longer term at double the consumer price index (CPI) was just not practical.

A series of projects to address the considerable service charge challenge focused on two areas:

An initial assessment of comparative numbers did not indicate that MWW's operating costs were out of order. Working with the then-COO, the task was to figure out the underlying root causes of not just the already high water service charges, but also why they needed to continue to increase at high rates to maintain the sustainability of the business.

Our analysis found that recent and projected capital expenditure was a much more significant contributor to service charge growth than operational costs. The central Queensland region experienced relatively high population growth from around 2007 to around 2011, on the back of a mining and mining services boom. Population growth rates that historically were somewhat below the national average suddenly shot up to around twice the national average. Much of the required capital expenditure was to ensure that the infrastructure kept up with the demands placed on it by these high growth rates. The long-term financial forecast projected that high population growth rates would be sustained over a 10- to 15-year period.

By delivering prudent allocation of capital, management accountants can provide strategic support across the entire organisation. At MWW, the management team, working with the COO, drew up a plan of action to review the entire capital decision-making process. Local government bodies are by nature extremely risk averse. This was reflected in most of the capital decisions, with a general attitude of build as big as possible and renew or replace as early as possible. Capital decisions were primarily driven by technical considerations by staff in technical disciplines. The time value of money was not being considered at all.

Multiple concurrent initiatives were considered and implemented to address the many issues. One early programme that relied on management accounting skills was to identify data gaps that inhibited a fact-based decision-making process. Measures were put in place to also bring the data that was being collected into a central, structured database to improve its availability and accessibility.

A capital decision-making framework was established to standardise the decision-making processes across asset classes. A basic business case was required for all capital projects. Identifying the drivers for the decisions (the problem to be solved) and establishing the existence of the problem based on data was made mandatory, as was identifying multiple options as solutions, with "Do Nothing" (ie, bear or live with the risk created by the problem) always being one option. The financial costs and benefits of each option were calculated, and the concept of adjusting numbers to account for the time value of money was introduced to ensure a proper comparison of options. (To see how the hierarchy of solutions was incorporated into the standardised decision-making process, see the table "Decision Drivers and Solutions Hierarchy".)

The decision-making process was further embedded into an enterprise project management framework that went beyond the decision-making phase into managing the procurement and/or construction phases to ensure capital projects were delivered on time and within budget. The capital delivery rate (value of capital projects delivered during the year compared to that planned at the start of the year) was improved over several years from around 50% to 85%.

Decision drivers and solutions hierarchy
For each project decision driver, there were five solution options that had to be considered.

Do nothing (accept risk)

A significant piece of work, to improve the network asset failure information required for better capital decision-making, was to establish a centralised schedule and dispatch (S&D) centre that managed all assignment of work to field crews. Despite being substantially an operational role, this process was led by the business services unit, using administrative rather than technical staff. The administrative staff were more adept at using the systems to manage data and more trainable on the new processes due to lack of pre-conceptions.

The CRM (customer relationship management) system was reconfigured and customer service officers retrained to ensure a systematic and consistent capture of customer request data, which was fed through to the S&D centre. It was classified in more detail before being dispatched as tasks to field crews. Field crews were also trained to capture a range of information on work carried out, asset condition, timeframes, and customer impacts to be fed back into the S&D centre for closing the tasks.

Geolocation data from vehicle GPS systems was made available to S&D centre staff so that they could assign tasks to minimise travel between them (the council area is more than 7,500 square kilometres). The process also largely eliminated the need for crews to come back to the depot between jobs.

High disposable incomes, a subtropical climate with hot and dry summers, residential properties dominated by larger suburban blocks, and an affinity for backyard swimming pools all increased per capita demand, compounding the effects of population growth.

As a result of increased demand, it was estimated in 2010 that the treatment capacity of the only water treatment plant servicing the Mackay City area would need augmentation by 2020. Due to the age and the location of the existing plant, the only viable option was to build a new greenfield plant at a different location. Once all ancillary infrastructure was factored in, the initial estimates of the proposed plant came in at a price tag of around AUD 100 million — the single largest item by far in the long-term financial forecast's capital programme.

A scenario analysis indicated that when coupled with the lowering population growth that followed from 2012 and the end of the mining boom, a 10% reduction in residential per capita water consumption would enable the deferment of the new water treatment plant by around five years. At a 5% cost of funds, savings in that alone would amount to around AUD 25 million over the deferment period. This definitely indicated the need to explore potential non-asset-based and non-capital-based options, with a view to deferring the treatment plant by at least five years.

A demand management programme, project-managed by the business services division, was designed, with a view towards extending the population that could be served by the treatment plant. Due to the region's seasonal demand pattern, the focus of the programme was not to curtail demand year-round but rather to reduce the demand during the peak dry season. It consisted of two key elements:

Both the social marketing campaign and the smart metering programme were project-managed by the business services division.

The forward price path for water continued to be lowered over several years after the initial success (see the graphic "Residential Water Price Path Comparison"). Similar price path improvements were also delivered for sewage and garbage services. The water projects' success was recognised with the Operations and Management Innovation Award by the International Water Association in 2016. 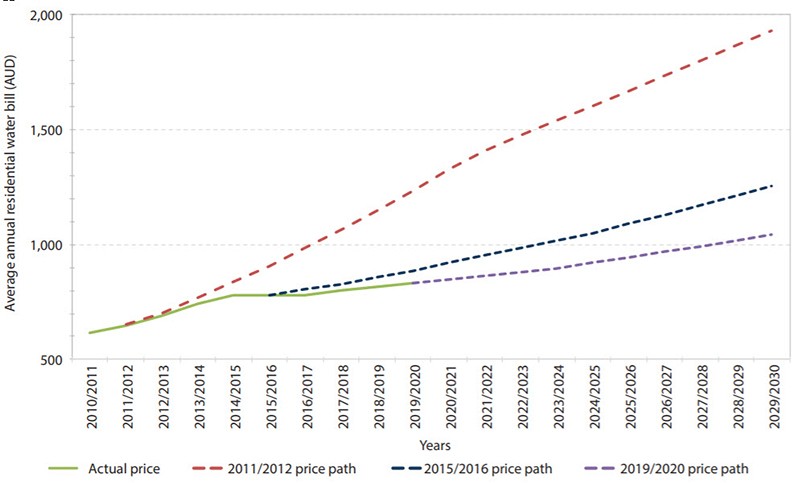 Water and sewage service charges are fees charged for the delivery of the utility services. They cover three elements:

The most common pricing structure for water services is a two-part service charge:

Stephen Fernando, FCMA, CGMA, is CFO at Whitsunday Regional Council and was previously manager, business services, at Mackay Water & Waste at Mackay Regional Council. Both council areas are in Queensland, Australia. To comment on this article or to suggest an idea for another article, contact Oliver Rowe, an FM magazine senior editor, at Oliver.Rowe@aicpa-cima.com.