When any organisation reaches a milestone anniversary, it's easy to look back through events in its history and see what's truly important to its people.

This is certainly the case with The Chartered Institute of Management Accountants, whose history is chronicled and celebrated in rich detail in Martin Farrar's book Leading the Transformation: 100 Years and Beyond.

The publication by Farrar, Ph.D., an associate technical director—Management Accounting at the Association of International Certified Professional Accountants, is available as a free PDF download at cimaglobal.com. The text shows that from 1919 to the present day, CIMA members have displayed:

The book contains countless anecdotes detailing the many accomplishments of CIMA and its members, from the organisation's modest beginnings 100 years ago through its emergence as a global force in management accounting. Here are summaries of just a few highlights.

The Institute of Cost and Works Accountants, as CIMA originally was known, was established in 1919. In February of that year, seven individuals who had discussed the possibility of forming an association agreed to the principal objectives of the Institute.

The objectives were part of a Memorandum of Association that explained the seven signatories' desire to join forces. The objects were:

One hundred years later, these principles are alive and functioning in CIMA. The organisation continues to maintain an examination process to certify competency, and this year it issued an updated version of the CGMA Competency Framework. The framework is designed to help management accountants, finance professionals, and their employers understand the knowledge requirements and assess the skills needed for the roles they occupy today and the positions they hope to fill in the future.

The story of industrialist Lord Leverhulme, who was appointed the Institute's first president on 2 December 1919, is well known. Leverhulme was co-founder of Lever Brothers, which originally manufactured a product known as Sunlight Soap and later became part of Unilever.

However, he was hardly the only prominent early industrialist to hold an important role in the fledgling organisation for accountants. Well-known vice-presidents of the Institute at the time included:

Contents of the early syllabus

The intermediate and final levels of the examination process required deeper knowledge of subjects such as economics, costing, workshop knowledge, and advanced bookkeeping and legal issues.

Miriam Sarah Neale was admitted as the Institute's first female fellow in March 1921. She was recorded as member number 272 in the first book of members and had a long and successful career in business and accounting.

She spent the early part of her working life with an engineering company and began work as a cost accountant at the pharmaceutical manufacturer Allen & Hanburys Limited in 1917. She was promoted to chief cost accountant in 1923, and 25 years later she began serving as a director of Penplas Industries Limited, which made low-cost fountain pens.

Annie Alice King became the Institute's second female fellow in June 1924. She was head cost accountant at St. Clement's Press Limited, which printed the Financial Times newspaper. King spent most of her career in the paper and printing trades.

The first female Institute Council Member was elected in September 1980. Denise Jenkin represented Area number 10, The Republic of South Africa. She had served as head of the accounting operation at an electrical/mechanical engineering company and as group accountant/company secretary for a large international citrus company before starting her own computer bureau in 1974.

In 2003, Claire Ighodaro's election represented a milestone on two fronts as she became the Institute's first female president and its first black president. At that time, she was finance director, broadband, at BT.

"It's nice to look back and see that things have changed and that there are opportunities for everyone," she said in 2003. "A lot of it is down to how you approach matters. Things are difficult because you think they will be. If you want to do it, just get on with it." 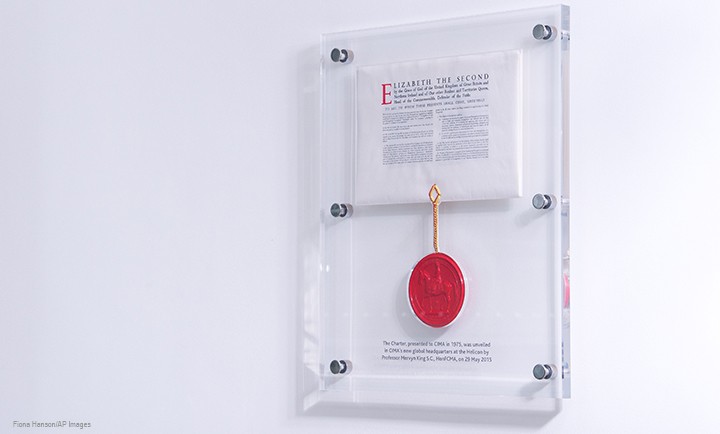 The Institute had pursued a Royal Charter of Incorporation starting in 1923. The dream finally came to fruition when the Queen in Council approved the grant on 13 February 1975.

The Institute first raised the issue of pursuing a Royal Charter in 1919, but the cause initially was abandoned because of its cost. Four years later, the Institute announced at its annual general meeting that it had applied for a Royal Charter.

Ronald Smith, Barrister-at-law, described the importance of a Royal Charter in an article in The Cost Accountant: "The grant of a Royal Charter at the present day constitutes a recognition by the highest authority that the public welfare is concerned in the activities and the prosperity of the body to whom the charter is granted."

Partly because of opposition from several societies and the Institute of Chartered Accountants in England and Wales, the first application for a Royal Charter was not granted. But more than 50 years later, the dream of receiving a Royal Charter became a reality.

The Queen in Council approved the grant of Royal Charter of Incorporation to the Institute on 13 February 1975.

"Every ICMA member and every student, here and in many countries abroad, will take pride in this, the most momentous point in the Institute's history," Institute President Denys Edmonds said at the time. "It ought to be a matter of pride, too, to the whole profession."

The first reference to official Institute representation outside of Great Britain was an announcement in the Institute's journal in 1922 that Charles F. Treeby, ACWA, was appointed honorary representative of the Institute for India.

The international character of the Institute grew steadily, and by 1971 the organisation had members in 87 countries around the world, and students could take Institute exams at 92 centres across the globe.

Now, of course, CIMA has members and offices all over the world.

The new armorial bearings and badge of office of the Institute were granted in October 1932 under letters patent by the Royal College of Arms. The motto, using the Latin words for "Probity, Accuracy, Justice", was selected to evoke the spirit of service displayed by the Institute and its members.

Symbols on the coat of arms that visually represent the work of the Institute and its members include:

In 1953, a pair of lions was added to the coat of arms. One lion carries crossed tally sticks, which represent the ancient method of accounting. The other carries an hourglass, which symbolises the measurement of time. Wheels at the foot of each lion are representative of industry.

War and the cost accountant

Cost accountants were in high demand during World War II because they were viewed as the linchpin between manufacturing firms and government departments. At a time when every resource was immensely precious, costing was seen as extremely valuable because of its role in maximising production efficiency.

The report from the annual general meeting in 1942 noted that: "The Institute has done and will continue to do everything possible to co-operate with all concerned in this matter. The Institute has co-operated with the Ministry of Labour and National Service, and other government departments, in all matters affecting the provision of suitably experienced members."

The incident caused Council to agree to move Institute functional activities back to Links View, Sandy Lane, Kingswood, Surrey. In 1944, however, the Institute's temporary headquarters 20 miles outside of London also received superficial damage from German rockets that were aimed at London but went astray.

Meanwhile, 99 of the Institute's 1,366 members and approximately 881 of the Institute's registered students were attached with HM Armed Forces at the beginning of 1941. Incredibly, thanks to arrangements by the International Red Cross and the University of London, the Institute was able to hold examinations for prisoners of war held in Germany.

On its 100th anniversary, CIMA is a vibrant international organisation that remains a credit to the objectives laid out by its founders. CIMA's headquarters are located in the heart of London's financial centre, and the 2019 edition of its CGMA Competency Framework has been expanded in response to the emergence of new digital skills that management accountants and finance professionals will need to know to continue succeeding in their current positions as well as the roles they will fill in the future.

In 1925, upon his appointment as the second president of the ICWA, Walter Howard Hazell said: "If the enthusiasm of the members of the Institute meets with its just reward, and their ideals are attained, it will become a great and important body in the commercial life of the country, and industry will have benefited enormously by the activities of the members and the same principles they have advocated."

One hundred years after its founding, CIMA has met and even surpassed those lofty ideals as an important body in the commercial life of the world as well as the UK. The vision of the Institute's early leaders has been realised, and today's members continue to advance the organisation's mission into the future — in an uncertain time when a management accountant's skills are as valuable as ever.

An idea hatched by a small group of accountants led to the formation of an organisation that has become highly influential and known throughout the world for its profound effect on management accounting. In this podcast, Martin Farrar, Ph.D., author of Leading the Transformation: 100 Years and Beyond, talks about some of his favourite moments in CIMA’s history. Click here to listen to the podcast, “CIMA’s History — The Route to 100 Years”.

Ken Tysiac is FM magazine's editorial director. To comment on this article or to suggest an idea for another article, contact him at Kenneth.Tysiac@aicpa-cima.com.