The October article "How Not to Make a Mess With VLOOKUP", identified potential pitfalls in two lookup functions, VLOOKUP and HLOOKUP. Conspicuous by its absence in that article, LOOKUP may seem a less versatile function upon first glance, but it is quite useful for modelling. Let's take a closer look.

LOOKUP requires the data to be "looked up" to be in ascending order, but it doesn't have to be strict ascending order. For example, the sequence 1, 2, 3, 3, 3, 4, 77, 77, 78 would be fine. It then hunts out the largest value less than or equal to what it is looking for. So with duplicates, this means the final occurrence of the value, which can be really useful when grouping periods in modelling. In fact, LOOKUP is often the optimal function to use when you are looking up dates in a time series, as they are always in ascending order.

LOOKUP has two syntax forms: an array form and a vector form. Let me explain the jargon:

For an example, see the screenshot "More Columns Than Rows". 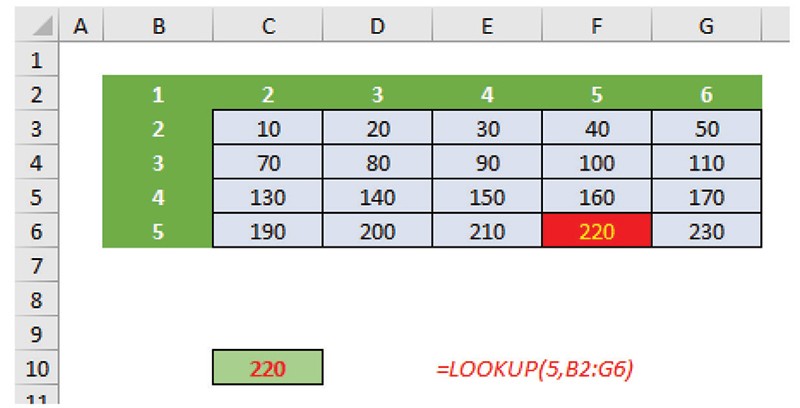 LOOKUP will seek the "5" in the first row and return the corresponding value ("220", highlighted) in the bottom row. However, as soon as there are at least as many rows as columns, LOOKUP will "flip" and seek the "5" in the first column and return the corresponding value (with "230" highlighted) in the final column (as shown in the screenshot "Equal Number of Rows and Columns").

Equal number of rows and columns 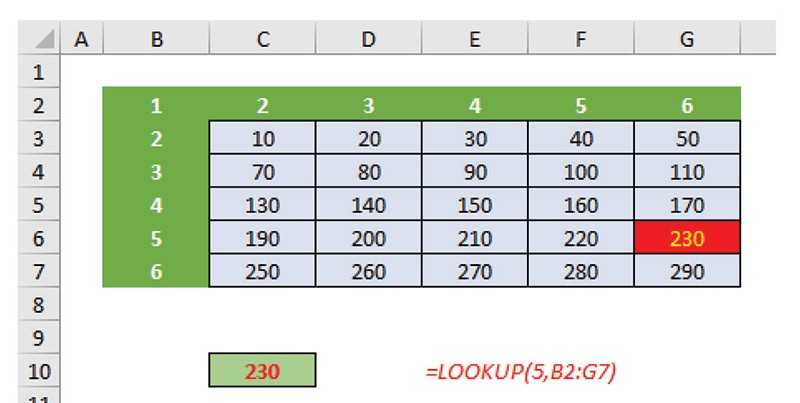 You should not be held hostage to an end user inserting rows and/or columns and messing up your formulas, so the array form is not recommended generally.

The alternative form is the vector form:

The LOOKUP function vector form syntax has the following arguments:

As mentioned above, like the default versions of HLOOKUP and VLOOKUP, lookup_value must be located in a range of ascending values, ie, where each value is greater than or equal to the one before. If this rule is followed, LOOKUP will return the value occurring to the final occurrence of the lookup_value (whereas MATCH would return the first occurrence).

To explain why I think LOOKUP is so useful with dates, look no further than referencing model inputs. You may have a model that forecasts for 20 years annually or 10 years monthly, etc. That's a lot of inputs to enter. Isn't there a better way to do it, where the end user doesn't have to put in inputs in every period but can just assume they are the same as the last period after a while? This is where LOOKUP comes into its own.

Yes, LOOKUP is simpler to use and doesn't rely on row or index column numbers. But there's more to it than that: It allows modellers to create inputs that do not need to be specified for all periods modelled. That makes models smaller, more efficient, and easier to follow.

Let me demonstrate with the example in the screenshot "LOOKUP Example" (the full set of examples may be found in this Excel file):

Imagine you have an annual model forecasting for many years into the future. Creating inputs can be time-consuming if data have to be entered on a period-by-period basis. But there is a shortcut.

Consider the data table in cells F12:K13 in the "LOOKUP Example" screenshot. The value in the final cell of the first row is actually the numerical value "2020" not the text value "2020+". It appears that way due to custom number formatting (Ctrl+1).

The syntax "0+" adds a plus sign to the number, although Excel still reads the value as 2020 (see the screenshot "Selecting Custom Number Formatting"). 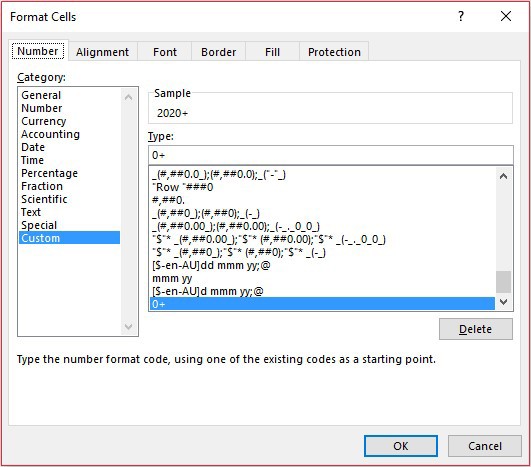 The formula in the first example, LOOKUP(G$19,$G$12:$K$13), uses the array version of LOOKUP, looking up the year in the first row of the data table and returning the corresponding value from the final row. When a year is selected that is greater than 2020, the 2020 value is used as LOOKUP seeks out the largest value less than or equal to the value sought. Therefore, we don't need to have lengthy data tables — once we assume inputs will be constant thereafter, we can just curtail the input section.

As mentioned earlier, using the array form of LOOKUP is dangerous, though. What if someone inserts rows? The lookup will "flip" to look at the first and last columns instead, which is not what is required. Using the vector form is safer, as shown in the screenshot "Using the Vector Form for Assumptions and Results".

Using the vector form for assumptions and results

Whilst the formula shown above, LOOKUP(G$19,$G$12:$K$12,$G$13:$K$13), contains one more argument, the formula is more stable. Further, the lookup_vector and the result_vector do not need to be in the same worksheet or even the same workbook. In fact, as long as the same number of elements is in each, one can be a row vector and the other a column vector.

LOOKUP is very useful when the lookup_vector contains data in ascending order. Where do we find this? Dates in time series. LOOKUP is very useful for financial modelling/forecasting. Just be careful, though. Consider the scenario where the Assumptions start with the year 2016 but we still want Results for the years 2013—2015 (let's assume that we know the Assumptions for years before 2016 were also 3%) (see the screenshot "Assumptions and Results in a Time Series").

Assumptions and results in a time series

Here, the same formula generates an #N/A error. This is because the date is smaller than the smallest value in the data range. LOOKUP is not quite clever enough to use the first value unprompted, but a simple tweak of the formula will suffice, as shown in the screenshot "Adjustment to Formula for Assumptions and Results":

Here, the formula has been modified to:

Adjustment to formula for assumptions and results

The added IF statement checks to see if the year is smaller than the first year in the data table and, if so, returns the first result. Simple!

It is with this final modification — in its vector form — that I usually use LOOKUP to return values for certain time periods where I do not want to have an input for each period modelled. Very useful!

In case you aren't convinced, let's finish with the example in the screenshot, "Monthly Financial Data for Sales and Net Assets".

Here, I have monthly financial data for Sales (from the income statement) and for Net Assets (from the balance sheet). To summarise the data quarterly, row 22 uses a SUMIF function to sum the sales data if they are in that particular quarter. Modellers perform similar calculations day in and day out:

However, row 24 shows the closing balance for Net Assets in each quarter. Here, I regularly see a vast array (pun intended) of megaformulas that Tolstoy would have been proud of. We don't wish to sum the Net Assets amounts for all the months included in the quarter — we just want the final balance. This is something LOOKUP was born to do. The function in cell H24 is a very simple alternative to the nightmare calculations performed regularly elsewhere:

Liam Bastick, FCMA, CGMA, FCA, is director of SumProduct, a global consultancy specialising in Excel training. He is also an Excel MVP (as appointed by Microsoft) and author of the book Introduction to Financial Modelling. Send ideas for future Excel-related articles to him at liam.bastick@sumproduct.com. To comment on this article or to suggest an idea for another article, contact Jeff Drew, an FM magazine senior editor, at Jeff.Drew@aicpa-cima.com.