An event to celebrate CIMA's centenary and the 2018 exam high achievers was held in Yangon, Myanmar, at the end of September. It was attended by 60 members, students, and guests, including guest of honour professor U Maw Than, Ph.D., union auditor general.

The Association's head of South East Asia, Ginny Lim, said that in serving members and students, CIMA and the Association are driving "a dynamic accounting profession" that is "ready to meet the demands of a constantly changing, disruptive digital world".

As the term of office of the council member in each of the following CIMA electoral constituencies (EC) expires at the end of the Institute's Annual General Meeting in 2020, elections will be held in February 2020. Nominations for candidates (fellows) to fill the vacancies must be made by six or more members (three of whom must be fellows) whose registered addresses are in the constituency concerned.

* Members not eligible to stand again, having served on Council for nine or more years.

A nomination form for election candidates and other information is available to download at cimaglobal.com.

The form may also be obtained from the Corporate Affairs department at CIMA by emailing corporate.affairs@aicpa-cima.com. Please read the rules carefully before completing the form.

The nomination must be received on the prescribed form by 13.00 hours GMT on Thursday 9 January 2020 and should be clearly marked for the attention of the Corporate Affairs manager. A scanned or a faxed copy of a signed and completed form is acceptable.

The Corporate Affairs team will acknowledge receipt of the nomination form promptly, either through an automated process or by individual acknowledgement. It is, however, the candidate's responsibility to ensure that his or her form has been received. To avoid uncertainty, it is recommended that, if candidates do not receive this confirmation, they contact the Corporate Affairs team directly at corporate.affairs@aicpa-cima.com before the closing date, to seek confirmation.

If there is more than one candidate for a vacancy, a ballot will be conducted. The Corporate Affairs team will contact you if an election is required.

Around 400 delegates from across Africa and beyond heard expert speakers, including Gbemi Adelowore, ACMA, CGMA, head of finance at the West African branch of global software company SAP and Bob Osho, FCMA, CGMA, managing director of Metrofile Nigeria.

Noel Tagoe, FCMA, CGMA, Ph.D., academic and consultant on the future of finance, spoke about the digital transformation of finance and the wider organisation.

The Association's then Africa regional vice-president, Tim Simba, said the conference "challenged all that attended to make bold decisions about themselves, their career paths, and their career objectives". 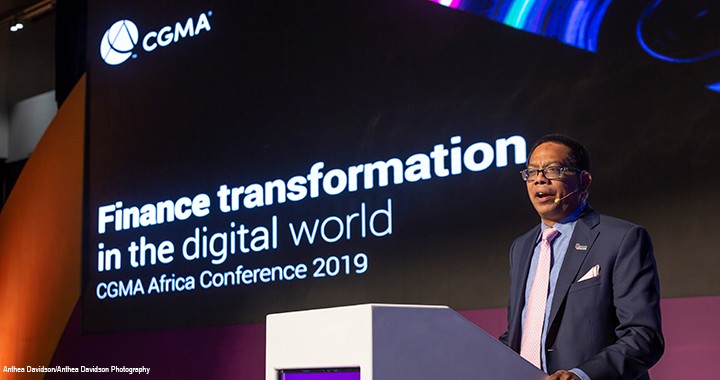 Recent research by the Association of International Certified Professional Accountants has shown that nearly one in five (19%) UK workers hasn't prioritised learning and practising new skills in the past 12 months. This figure is down from 26% in a similar 2018 Mind the Skills Gap survey.

This year, 40% of workers said they felt they needed to learn new skills because new technologies are changing their roles. Despite this, only 26% of employees said they want to acquire new digital skills to help them in their jobs. Additionally, the research revealed that there is confusion about who has responsibility for employee training and development — 79% of employees believe their company is responsible for training while 69% of SME employers feel it is their responsibility.

Andrew Harding, FCMA, CGMA, the Association's chief executive—Management Accounting, said the solution to the UK's productivity puzzle was not in sight. "One problem is the gap in understanding around who bears responsibility for employees' learning and upskilling; another is the financial burden that is often associated with further education and professional training."

He added: "Many employers are already responding to the demands of digitisation, but more needs to be done by government and businesses."

CIMA members and registered students are required to abide by the Code of Ethics. The Code has been updated to ensure it remains relevant and takes account of the different ethical challenges members and students could face in their roles. The new Code will be enforced from 1 January 2020.

Ahead of that date you can familiarise yourself with it on the Code of Ethics webpage at cimaglobal.com. The key changes to the Code are outlined in an October 2019 FM article, "New Code of Ethics Is True to CIMA's Core Principles."

The ethics pages of the CIMA website contain resources to help you understand the Code of Ethics and develop the knowledge and skills you need to handle ethical dilemmas.

Preparing members for the digital world

The CGMA Mindset for a Digital Future (insights.cgma.org) introduces members to the technologies disrupting finance and finance roles, how these technologies impact business models, and why professionals need to develop a growth mindset to succeed in the digital world.

At the end of the report, members can use the code BENEFIT19 to obtain their free Digital Mindset Pack.